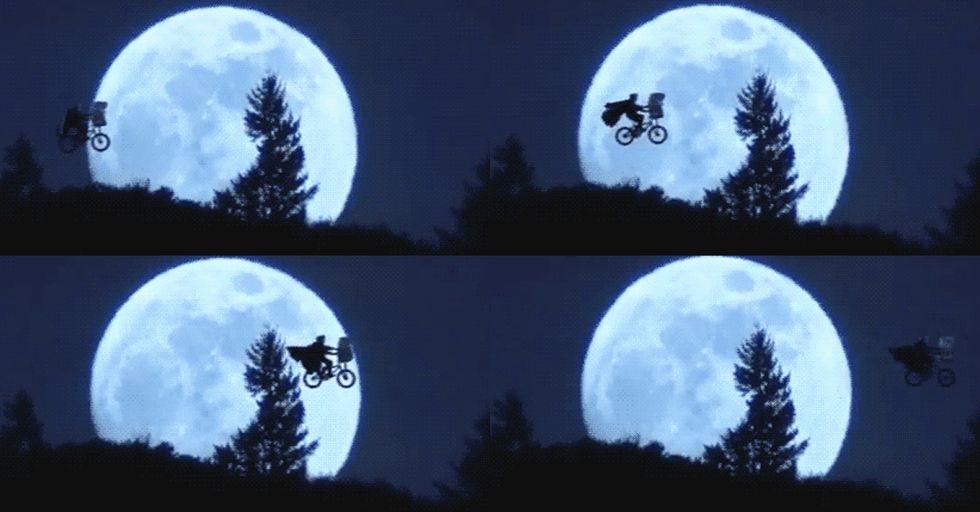 What is your favorite movie moment of all time? That is the question that filmmaker and film fan Scott Derrickson proposed to the people of Twitter about a week ago. Now, he was not asking people to share their favorite movie. He was asking people to share what they believe is the greatest moment in a film in the history of cinema. And the people of Twitter delivered.

Some of these moments were chosen for their emotional intensity, while others are recognized the incredible acting performances or unique and trendsetting visual style.

Whatever the reason, the following 30 movie moments are burned into our brains for their emotional effect and their contribution to film history. These may not be the best movies of all time, but their individual moments are no doubt total classics in film history. So...do you agree with this list?

I mean, yes. Jaws is one of the greatest movies ever made, and this moment was beyond shocking the first time I saw it.

This is such a dad movie, but it is also a quality film. You should watch The Untouchables with your dad or uncle.

@scottderrickson I think the Normandy invasion scene from Saving Private Ryan might be the top scene. https://t.co/W6pp63HqIH
— Rollo (@Rollo)1537931911.0

Saving Private Ryan may not be the best overall movie on the list, but the Normandy invasion scene is still held up as one of the most classic war scenes ever.

OK. You don't understand. Hot Rod is a majestic piece of filmmaking and it does not get the credit it deserves. Once you watch it, you'll and appreciate it.

@scottderrickson I dunno about greatest ever but I think about this *constantly* https://t.co/Nz5XWupuJt
— sawyer mom (@sawyer mom)1537933165.0

The Master was a weird movie, but Philip Seymour Hoffman and Joaquin Phoenix both gave incredible performances.

This list could consist of only Roy Scheider's face in Jaws 30 times, and I wouldn't complain. It makes sense to me.

This movie is full of amazing, classic moments, but this one might take the cake. Honestly, if you're not crying from beginning to end while watching this movie, you are not human.

This is Robin Williams' second appearance on this list; he's a gem of a human being and we were so lucky to have witnessed his greatness. Obviously, you see that this moment in Good Will Hunting is incredibly moving.

I was pretty much constantly wincing while watching The Wrestler because Mickey Rourke threw himself so completely into this character.

Come on. Marty McFly shredding on the guitar is definitely an iconic movie moment. It doesn't get much better than this.

I cannot tell you how much I love this movie. This scene is probably the tensest in all of movie history. I totally agree with this selection.

Let's talk about how amazing Mad Max: Fury Road was. Charlize Theron was so cool, and I loved that the film was about strong women defeating evil men. This scene was insane.

I mean, yes, this is a total classic. This exact moment has been recreated in countless homages and parodies since then.

No Country for Old Men

This movie was so intense, and Javier Bardem's acting job is so extremely chilling, and great. The Coen brothers stay at the top of their game here.

Eternal Sunshine of the Spotless Mind

Now, this is one of my favorite movies of all time. Jack Nicholson in The Shining is so realistically scary. It's terrifying.

@scottderrickson Last scene of Shawshank, because you know the characters have reached the pinnacle of happiness af… https://t.co/HpMfn7YMKf
— hunter (@hunter)1537991968.0

I mean, how could this scene not go on the list? The Shawshank Redemption regularly tops lists of the best movies because of scenes like this.

This is one of the best moments in cinematic history, hands down. You are so rooting for this couple, but then at the end of the movie, there they are in the back of the bus, with no idea what to do now.

This movie gave us a terrifying depiction of what the apocalypse was like before we started living in our own apocalypse!

@scottderrickson I could list my personal favorites all day but I truly think the best scene of all time’s gotta be… https://t.co/jffsjyhW0w
— olivia (@olivia)1537992913.0

Even with all the Marvel movies, I have to say that The Dark Knight is the greatest comic book movie of all time. Do you agree?

@scottderrickson Just thinking of this scene from The Color Purple makes me wanna cry. So many to choose from! https://t.co/552F77ji6C
— antony pedreira (@antony pedreira)1537933832.0

Well, I am crying just watching the GIF of this scene from The Color Purple, so I would say this person chose correctly.

@scottderrickson I’ve loved this movie, and this scene in particular, since the first time I saw it in the theatre… https://t.co/hD5yT3EzTS
— Branden McCarney (@Branden McCarney)1537992302.0

This movies has one of the greatest endings of all time, so this was an interesting choice for a scene, but honestly, I totally get it.

This whole movie made me feel so tense. How can something about jazz drumming give you such a rush? Come on! How did they do that?

Obviously, this moment sticks out in movie history like a red coat. (See what I did there?)

Finally, a comedy moment for the ages! We have been through a lot of dramatic films, but do you remember your reaction when you first heard him say, "McLovin"? That was incredible.

Drive is such an atmospheric triumph and such a moving movie that has so little dialogue. This moment was definitely super interesting.

This whole movie is full of classic comedic moments, but I have to say my favorite is probably the performance of "Puttin' on the Ritz."

You can't forget this movie moment, especially since it is now part of the logo for Steven Spielberg's production company. That's how classic it is!

Yes. Obviously, Space Jam deserves a spot on this list. Share this with your favorite movie buff!