People Are Sharing Horrific Stories of the Times They Tried to Cut Their Own Hair...and Failed Miserably | 22 Words 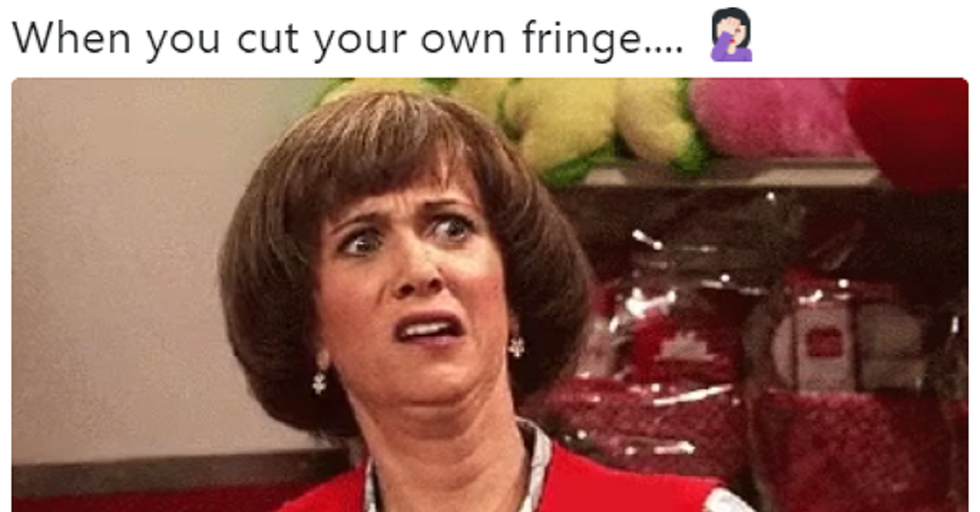 People Are Sharing Horrific Stories of the Times They Tried to Cut Their Own Hair...and Failed Miserably

STOP! Put down the scissors. Trust me — it's not a good idea. We've all been there before, but save yourself the trouble and just go pay someone who knows what they're doing to cut your hair. It'll be worth it.

If I can't convince you, then maybe Twitter can.

Save yourself from having to hide in your house for at least a week.

I mean, most of us want to hide inside for a week, but on our own terms. Not forced by bad bangs.

The best case scenario here is that you look like Zack Galifianakis.

Which could be worse, but probably not the look you're going for. Galifianakis looks like Kenny Loggins here. Danger zone!

Sophia was smart enough to stop herself.

Even Drunk Sophia was able to hold back the urge. If she can do it so can you.

Not everyone is able to resist the temptation of cutting their own bangs though.

If your own mother laughs that is a very bad sign. Time to shave it off.

There is no positive outcome from it.

You'll either look like this old woman or get looked at like her. Not sure which is worse. Take these firsthand accounts into consideration.

Even someone who did it successfully deemed it a code red.

I have never been in a situation where "code red" is a good thing. Heed the young lady's warning.

Rarely are you planning on cutting your own hair.

It just kind of happens. But you must resist.

Hide your scissors from yourself if you have to.

No one person should have all that power.

If you know someone who might cut their own hair it's not too late to save them.

Even this person knows she did wrong. Even if she doesn't care.

One Twitter user's bangs fell victim to her own hands.

No bad news yet. So far so good...right?

Only you could've saved yourself, Esther. You were the chosen one!

Tons of people have had to learn this lesson the hard way.

But luckily after this you won't fall victim to yourself.

Male or female — it does not matter. This epidemic effects everyone.

Cutting your own fringe should have been left behind in 2008 along with MySpace and those Taking Back Sunday posters I used to have.

When you see another person who cut their own bangs there is a feeling of solidarity though.

So hopefully you will heed these warnings.