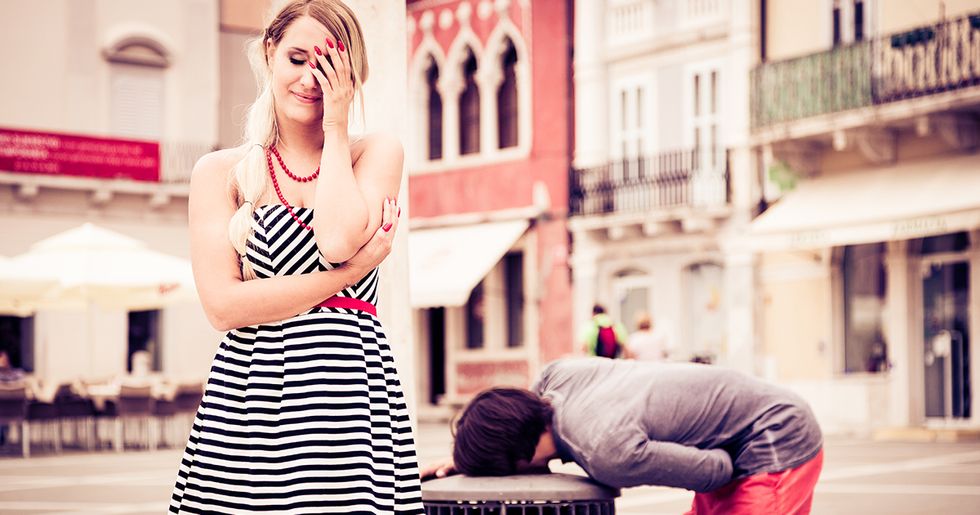 Chances are if you've been on least one date, you have also been on a bad date. I am not saying that all dates are bad. I am only saying that most of them are. Me, personally, my worst date was painfully boring, the dude and I had nothing to say to each other, and then at the end, he made me split the bill for two beers (we each had one) and a plate of shared French fries. We side-hugged and never spoke again.

And I got off way lucky! That is a super tame bad date compared to the nightmares on this list. Like, some of these traumatized me for life, and all I did was read about them. It seems like people all over the Internet (and honestly, mostly women) have unbelievable horror stories from dates they've had to endure. It is a wonder that women still agree to go on dates at all. These stories will make you scream and cringe and cry. Guaranteed.

We have this Twitter user to thank for the most horrifying thread in recent history:

We've all been on some bad dates, but somehow, each of these stories ups the ante in new and disturbing ways.

But like...what? WHAT? Was that the date? I have so many questions, but I don't want any of them answered.

This is terrible on so many levels. But I guess the being related to your date thing is the worst one.

There is such a thing as being too committed. This is what it looks like.

@proletariatitty Within 5 minutes of sitting down to dinner, the lady whipped out a handwritten epic poem (at least… https://t.co/XO37LID1Xj
— Nick Kolakowski (@Nick Kolakowski)1548030263.0

At least 50 pages! How?! How could she write that much? And she really was going to read the whole thing...

I am assuming the date ended right then and there. I don't know, starting off exchanging insurance information just doesn't sound very romantic to me.

Aw man, this sucks. Of course, he was cute and funny. But like, you gotta live your truth and all that.

There is so much going on in this one tweet, but the ax collecting thing is the perfect button. Just really ties it all together neatly.

Heck no! I am not waiting around for some dude I've never met to get off work. I barely do that for my fiancé whom I've been dating for over five years.

If this isn't the opening scene to a Psycho sequel, I don't know what is. This is insane.

What do you even do in this situation?! This is so uncalled for. So inappropriate. That's a total trap.

Met his parents. They led me out back to a broken jacuzzi filled with turbid water...then handed me a net & instruc… https://t.co/AkE0jkieCj
— Megan Nicole Dong (@Megan Nicole Dong)1548317112.0

Call me crazy, but I don't think I would eat a catfish that had been languishing in a family's jacuzzi. No thanks.

What sort of man would A- bring a date to the memorial of his ex-girlfriend who had died, and B- hold said memorial at a Dave and Buster's?

@proletariatitty Him talking 2 hours about himself and after I asked him if he isn’t interested in what I do said:… https://t.co/pDnm2KMhZ7
— muzlamic barbie ☭ (@muzlamic barbie ☭)1547954842.0

Ew times a million. That is not OK. What a total misogynistic piece of crap!

She'd been hoodwinked into shopping for his old girlfriend he's clearly still in love with! What! If that was a plot of a movie, I'd be like, "Nah. Too farfetched."

@proletariatitty Blind date invites me over to paint. We paint portraits of each other while he tells me if he won… https://t.co/gyA5DYWtkK
— space stepmom (@space stepmom)1548177557.0

Ooooh, this is so infuriating I can't even. Just say you're not interested or a commitment-phobe, bro.

This is hilarious. After accusing his date from stealing from him, he had the audacity to be like, "So this was fun, right?"

At a bar, Tinder date. He would ask me a question about myself, and as I started answering, he stopped paying atten… https://t.co/VcAfwL9P0B
— Barbara Dunkelman (@Barbara Dunkelman)1548276929.0

What is wrong with men? Seriously. This is a rhetorical question because trying to answer it would literally take forever.

Oh yeah, like it's the other woman's fault her boyfriend decided to go on a clandestine date. Cool cool.

Um, no. Just no. What do you even do? Call the cops? Like, that's the only option, right? So incredibly creepy.

Yeah, maybe as a dude on a date, knowing how much violence against women happens every single day, don't talk about taking women into the woods and murdering them. Just a tip.

I'm sorry, this is so funny. Why did he have that many identical skateboards? Is he a skateboard influencer?

How... How do you not know what illustrations are? Did you ever see a children's book growing up? Are you aware of Disney movies?

Every single thing about this makes my skin crawl. Oh, this is the worst kind of dude. Well, one of the worst. There are a lot of worst kinds of dude.

"Hey, you're gross. But I think I could use you professionally." No thanks.

This is horrible. So cringe-worthy. Literally got a chill down my spine reading this.

Why would anyone do this? The only answer is that they are literally out of their mind.

Negging is nasty and gross and this guy was so bad at it that he was just insanely insulting. Dudes like this do not deserve your attention.

Whoa! Twist ending. This is actually a great one. Share this with someone who knows the pain of bad dates!