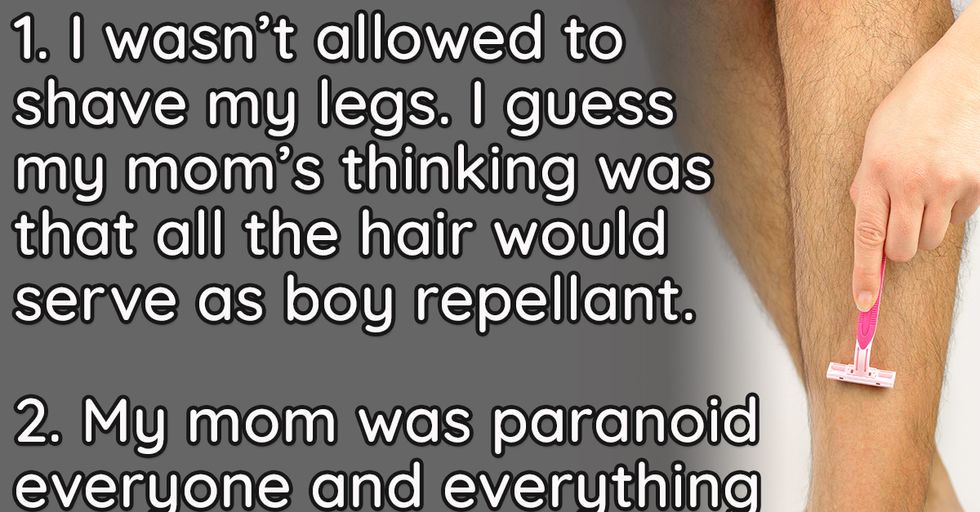 Every once in awhile, you may think back on your childhood and realize, "Wait a second. That rule made zero sense at all."

For instance, when I was a kid, the rule was that you had to finish all the food on your dinner plate. If you didn't finish your dinner, it went in the fridge and you ate it for breakfast the next day. If you still didn't finish it, well, you knew what you were having for lunch.

As an adult, I recognize that this rule was pretty bonkers (although I also totally get the whole "don't waste food" thing). In a recent AskReddit thread, Redditors came together to talk about the absurd rules they grew up with in their own households, and boy oh boy. There are some real doozies on this list.

1. Here's a phone with an unlimited texting plan. There's just one thing you should know...

I had unlimited texting on my cell phone plan, but couldn't go over 100 in a month or I was grounded. – jonbabe

The most bizarre rule that my siblings and I put up with was that we weren't allowed to sneeze multiple times in a row. One sneeze? Fine. Another sneeze after some arbitrary number of minutes later? No problem. Two sneezes in a row? Get yelled at for being unhygienic (even if you covered your nose/mouth properly) and for having no manners. – Asphodelic

3. Shaving? Not in this household!

I wasn't allowed to shave my legs. I guess my mom's thinking was that all the hair would serve as boy repellant. It wasn't necessary, though; my personality was more than enough to keep me from getting laid. – albadross

I was not allowed to use the money cheat on Sims growing up because that's not how the "real world" works, I used the cheat once and couldn't explain where all the money I had came from so I was grounded and had Sims taken away. – sowhatonion

(FYI: "Rosebud" is the Sims money cheat code, BTW. But don't tell this person's parents I knew that.)

5. Beverages are a privilege; not a right.

I wasn't raised strict at all, but looking back I realize that not being allowed to have a drink at dinner is kinda weird. At lunch? Fine. At a restaurant? Sure. But regular dinner at home? No drink or you might be too full to eat all of your food. – PePziNL

This next one has to do with the mail. What absurd rule could possibly be made about the mail, you ask? Just you wait...

6. You never know what that mail truck is hiding.

My mom was paranoid everyone and everything was a kidnapper. She hated the mailman on our route. So, when I was young, 3, 4 years old, my mom told me it was illegal to be outside when the mail came. Around 11:15 every day I'd see that truck coming. I'd high tail it inside the house, terrified I would be spotted. Fast forward 30 years. I still genuinely feel a tinge of panic in the smallest recesses of the back of my brain when I see the mailman arrive. Only now it's overpowered by the excitement of my latest Amazon package I really don't need. – ajustice83

Nobody in my house was allowed to get the mail except my dad. Doesn't matter what time he got home. Leave the mail in the mailbox. He would also personally open all the mail no matter the recipient. He would always know if anyone touched it. – xxxtommyXxXxX

8. The day Blockbuster closed down was probably the saddest day in this person's life.

You could rent movies, but not go to the movie theater. The logic was people may think you're seeing a rated R movie if you're seen at a theatre and that sets a bad example. – Tort--feasor

My mom used to not allow me to watch any movies that had magic in them. Jumanji was considered “demonic." I didn’t even see the Little Mermaid until I was 16. I didn’t watch the Princess and the Frog until I had moved out. – SherlockIsTheName

10. And of course, no Harry Potter. It wouldn't be a list about childhood rules without some Harry Potter in the mix.

My grandmother made me write out the encyclopedia entry on witchcraft when she found out I had read the first 4 Harry Potter books. – dkimball50