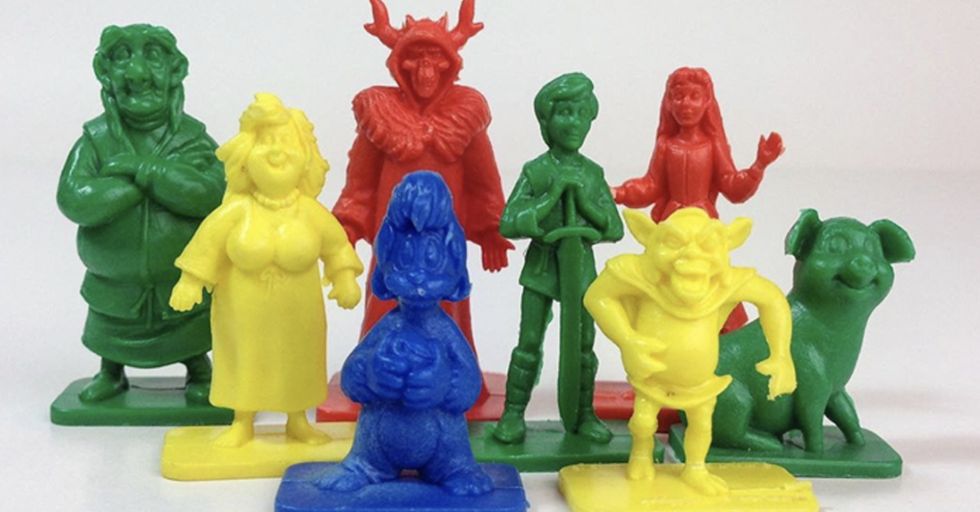 Being an adult is certainly challenging, but there are also plenty of fun things about it. You can have ice cream for breakfast if you want to! You can stay up as late as you want! You can buy whatever video games you've been wanting to play!

Of course...that breakfast ice cream might make you feel awful for the rest of the day. And staying up late usually means waking up feeling groggy and grumpy. And you can't buy too many video games because you have to, you know, pay rent. So I guess you could say adulthood has some drawbacks, too.

That's probably why the #BestPartOfBeingAKidWas hashtag started trending recently. People on Twitter began reminiscing about the parts of their childhood they miss the most. I gotta say, they definitely have a point. Reading through these tweets definitely left me feeling nostalgic. Maybe I will have some ice cream for breakfast after all.

Or maybe I'll just smear ice cream all over my face like this kid.

When you're a kid, you can do pretty much anything. Here are some of our favorite #BestPartOfBeingAKidWas tweets.

I'm pretty sure that four-poster beds were invented as a way to continue enjoying blanket forts into adulthood. There's nothing quite like spending time in a blanket fort (even if half of that time is spent rebuilding your fort after the blanket falls off the couch).

I remember being a kid and wishing I would get as much mail as my parents did. That changed as soon as I became an adult and realized all that mail was actually bills. Or junk.

Every once in a while I spend Saturday mornings watching television, but it just isn't the same as when I was a kid.

#BestPartOfBeingAKidWas Driving around in one of these bad boys! https://t.co/G8WIh8SdTE
— Alexis Turple (@Alexis Turple)1553619967.0

Remember when driving was a fun activity and not just something you had to do in order to get to work? Those were the days.

I remember getting computer games in cereal boxes! Not to mention those awesome color-changing Lion King spoons. Those were the days.

It's possible that we're just looking back on childhood with rose-colored glasses and things weren't really as good as we think they were. Nah. Never mind. Those days were wonderful.

If you talk to yourself as an adult, it's called "being eccentric." Or "totally bonkers."

Nothing was better than running through the sprinkler on a hot summer day. As an adult, I think I'd just be worried I'd slip on the grass and break my legs.

I think adulthood would be approximately 200 percent better if everyone still got a summer vacation. How can we make that happen?

Making a Christmas or birthday list was always so exciting! Having an Amazon wish list just isn't the same.

"Don't it always seem to go that you don't know whatcha got 'til it's gone?"

This tweet instantly transported me back to middle school. There was a giant dictionary in the media center that was used almost exclusively for looking up naughty words.

I play the adult version of the "floor is lava" game. It's called "the floor is dirty and you should really vacuum more often."

At my school, they called it D.E.A.R. (Drop Everything And Read) and — no joke — it was my absolute favorite part of every single school day.

I remember my little brother telling my mom to "just go to the wall" to get money for something (referring to the ATM). Such innocence.

The saddest truth about growing up is that as you get bigger, the blankets get smaller. On the plus side, that means you get to buy more blankets. You can never have too many.

You can always count on Grandma and Grandpa to spoil you rotten. That's what grandparents are for, right?

This is something that a lot of kids these days will never fully appreciate. We were pretty lucky!

A snow day was basically a surprise vacation with zero homework or responsibilities. Unfortunately, there's not really a grown-up version of snow days.

Do you ever just wish you could go back in time and read the Harry Potter books for the first time again?

Ah, the Great Lunchtime Trading Floor. Anything was possible if you had some Pringles or a pudding cup.

At first, I thought this tweet was maybe a little melodramatic. Then I remember that I literally broke my arm on a playground when I was a kid.

If you think about it, super-rich people still get to enjoy this level of luxury. Maybe rich people are really just trying to recapture their youth.

Every time I see a baby in a stroller, I have to really focus on not revealing how jealous I am of them.

There are many things I miss about being a child, but I think my metabolism might be the thing I miss the most.

I also miss being able to sit down or stand up without making weird grunting noises or listening to my knees creak.

I can still remember the sound of the ice cream truck that used to drive around my neighborhood. And I can still taste the Flinstone's Push-Ups I used to get every time.

#BestPartOfBeingAKidWas magically transporting yourself to bed after falling asleep on the couch while watching Joh… https://t.co/AEx3yZFQ1T
— Jason Mxyzptlk (@Jason Mxyzptlk)1553223710.0

These days, if I fall asleep on the couch, it means I wake up on the couch the next morning...usually with a crick in my neck and a feeling of regret.

Do kids still pass physical paper notes? Or is it all texting now? Oh my gosh I am so old. Share this with someone you grew up with!