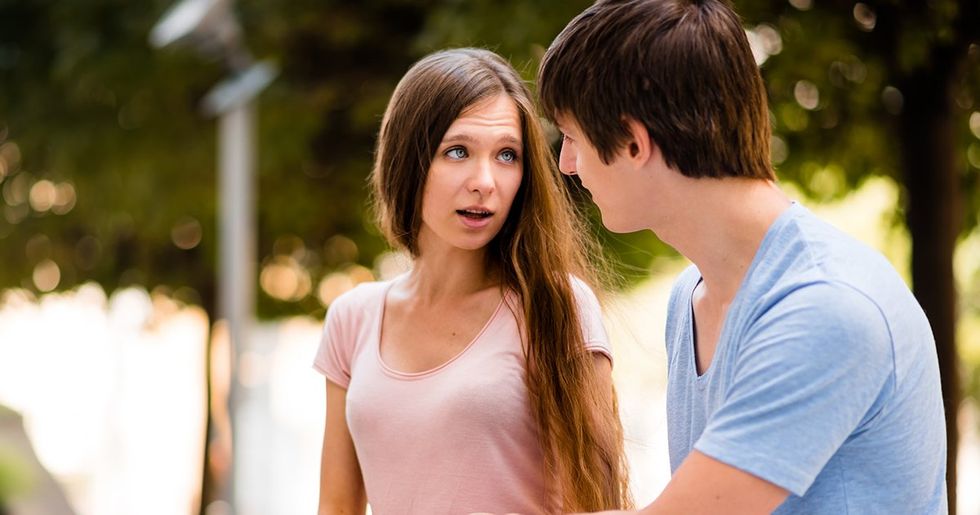 When you're in a relationship with someone, you get the very unique privilege of being able to see them in a variety of situations. You might get to watch them handle an intense situation at work and be super impressed with their ability to not freak out. You might get to see them tear up unexpectedly while watching a rom-com. You might see them get a touch of road rage when someone cuts them off on the freeway.

And you might get to see them do something really, really dumb.

Now, I love my husband more than any other person on the planet. I think he is very sweet, very funny, and amazingly smart. But I am also the person who explained to him that police dogs are called K-9 units because it sounds like "canine." It was a very hilarious conversation and I don't think I've ever seen someone look more mindblown. I feel very lucky to have been able to witness it firsthand.

A recent AskReddit thread gave people the chance to share their own stories of the silly things their significant others have done. I read through the entire thread with a huge smile on my face. Here are a few of my favorite entries:

Current girlfriend thought that the movie showings during the day were “Manatee Shows." I had to explain to her that they are in fact “Matinee Shows." –illini211

That's not how it works.

She told me she only waxes her legs because if you shave one hair, then it splits and two grow back in its place... –bleanblanket

I asked him to plant a baby tree in the back garden. The next day I saw it and thought it looked strange. Walked up and it had been planted upside down. He thought the roots were tiny limp branches. Laughed for days. –goaheadblameitonme

We bought a new car. She asked me if I changed the settings to Spanish because it said ‘Ajar’ on the dash when the door was open. –Chibano

My boyfriend as we were looking up at the beautiful night sky. "Wow, there's so much we don't know about the universe. Like where the stars go during the day. Are they still there? If not, where do they go?" He was dead serious. –tinbasher97

This is adorably dumb.

As I'm in labor with our daughter, my husband asks "Do you want her to have an innie or an outie belly button?" Weird question, but whatever. So I tell him I don't mind either way, both are cute. And then he says "Yeah, but when the doctor asks, which should we pick for her?" He thought when they clamp the umbilical cord, parents tell the doctor the type of belly button they prefer. He's really smart, I promise. –NoThankYouTrebek

They must be so proud.

My deeply intelligent wife lost her CAR. Like left it in a parking lot and somehow got home on Friday. Monday morning I get a text: “Where’s my car?" She’s gonna finish her medical degree next year. –Docdentandane

They need to be at least...three times bigger!

My husband and I were at Canadian Tire and they had tiny examples of tents (basically looked like they were made for Barbie dolls) and the pricing for each underneath. He turned to me shocked and asked, "Why are these so expensive for such tiny tents?!" I almost died laughing. –Zombombaby

This one is fun to imagine.

I showed her how to crack an egg by tapping it against another egg and she thought this meant any amount of force would be absorbed by only one egg and smashed two eggs together spraying yolk everywhere. –chunkyhenrybakes

My now ex-girlfriend got a Polaroid camera for Christmas. Jokingly one day I said, “Does it take videos?" And she very seriously said, “I’m sure it does but I haven’t tried that feature yet." –BeerAintDrinkin

As we were driving along the road we saw a horse with its head over a gate. We slowed down, she opens the window and says “Mooooooo." –StingerMcGee

I love this one.

We were on a walk, in a rural area with lots of farmers fields full of sheep and cows. She looks off to a field in the distance, turns around to me and says “Why do they keep birds in a field?" –Nate_Cakes

I love my husband but I have watched him empty a vacuum cleaner bag into a wire wastebasket. I, on the other hand, am frequently unable to remember common words and have to resort to saying things like “The box you put stuff in to make it cold." –AugustaScarlett

That would be helpful, though.

Once my SO and I went for a walk around a local nature reserve. On the way in we got a map given to us so we could navigate the area. Later on the walk, she is looking at the map and says to me "these maps really need a 'you are here' on them." It took me a second to realize what she meant, so I explained that it's a handheld map and that it wouldn't be possible, it took 4/5 attempts before it clicked with her. –Yazad

She ate cold turkey to try and quit smoking. –Notangryactuallycalm

My boyfriend thought that a sushi roll was a cross-section of a raw eel. –emilynicole121

Hope the couch was comfy!

I have a friend who’s husband said to her, “It’s so crazy how beautiful our children are when neither of us is that good looking." And then hilariously and painfully tried to backtrack. –kelseyschmidty

At least they tried.

That would be a pretty weird name for a street.

We were driving one day and were stopped at a red light. She’s looking at a sign and the following exchange occurs: Her: “What a dumb name for a street!" Me: “Huh? What street?" Her: “Bone Marrow Drive? Who would name a street Bone Marrow Drive?" It was a sign for a local bone marrow drive that would be taking place, not the name of the street. We still talk about it to this day. –TheRedGiant77

I have a fan with different settings labeled L M H for how fast the fan spins. She was looking at it and told me she set the fan to 'Large.' –hafuhafu

We had a power outage here recently. I said, “Guess we won’t be able to do laundry after all ... the water will probably be cold." My husband said, “Yeahhhh, plus there’s the fact that our washer and dryer run on electricity." –Shalamarr

He picked up our friend's keys, thinking one of her keychains was a laser pointer. It was mace. He got a nice spray to the face and I was sitting right next to him, so I got a lovely dose as well. For the next 30 minutes or so the ENTIRE apartment was coughing and dying and trying to air the place out. Even our friend who was upstairs showering could feel the effects. I still love him though. –dimplezcz

In our language, maple and moose are almost the same word. To make a long story short, she thought maple syrup was made out of moose horn. –Otisnemes

I hope they do the country proud.

My eldest child was born in December 2004. This was the year that we found out that London had won the bid for the 2012 Olympics. It was announced that children born on 20/12 would get free entry to the Olympics. “But what if they’re not any good at sports?" I had to gently explain that it was free entry to watch the Olympics. –NotoriousREV

It probably took a second to realize.

In high school, my girlfriend said, "Do you know what I just realized? There's no state that starts with the letter F!" We went to school in Florida. –warm_sock

I'll give you one guess.

My husband asked “What day is Black Friday on this year? Thursday?" The look of realization on his face when I said “uh, Friday" was priceless. –cloomis

On the phone trying to describe where we are to her parents: “We are behind the car that’s in front of us." I lost it. –Envision06

My wife couldn't think of the word "wood," and told me to clean up my "tree chunks." –irwinlegends