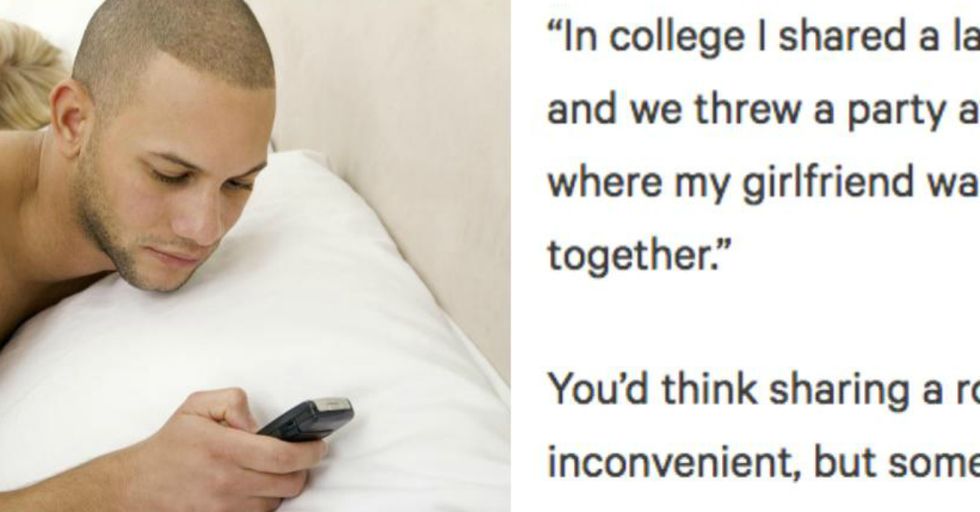 In a perfect world, every relationship would end with a polite conversation after which both parties amicably go their separate ways, never to speak or stalk each other's Instagram ever again. Maybe they could even share a breakup sundae and promise to delete all the embarrassing photos they have of one another. But in the real world, relationships don't always end with a friendly high-five.

Here are some of the worst stories of people finding out their significant other was cheating, and none of them include a mutual breakup sundae (although one does involve a giant cookie).

When a cheater accidentally incriminates themselves:

If someone is overly suspicious that you are cheating in a relationship (even though you’re definitely not) it’s usually a red flag that they are the ones with something to hide. Reddit user E_lizz wrote: “We shared a computer and he installed one of those programs that automatically saves all chat logs, most likely because he thought I was cheating on him (I wasn't). I didn't know this program was installed until I was looking for a document I needed for school. Found the program, opened it to see what it was, and found logs of him chatting with a girl about the great time they spent together and how he thought they really connected, etc." Um, whoops, that plan backfired. He’s definitely not getting his girlfriend back after that. And he's also probably not getting a job as an undercover secret agent, either.

This person was probably better off with a book, anyway:

The only thing worse than being cheated on is when the person cheating on you is cheating with your friend, which is exactly what happened to Reddit user Ash_Britt_Chloe_Spik: “My best friend lived in the family's old vacation trailer behind his house (back in the '90s). I arrived with a twelve-pack, opened the door and there was my girlfriend. She was standing full frontal (not a stitch on) and he was in his boxers. Later he told me "Nothing happened." J. D. Salinger had a term for that kind of guy, it was... PHONY." Nothing happened, though! I’m sure there’s a perfectly reasonable explanation like um, he was taking a life-drawing class and he had to sketch a nude figure and she graciously volunteered and also, um, all his clothes were in the laundry and ... nevermind.

Caught by the U.S. Postal Service:

Nobody is advocating for cheating, but if you’re going to do it, at least try to be like, not terrible at it. Reddit user tmushrush wrote: “She sent naked pics to the guy, with our return address and didn't put enough postage. I came home first that day..." She probably thought she was being super sneaky by avoiding having sexts on her phone but, come on, weigh that snail mail! That’s what the scale in the post office is for!

Foiled by her own technology:

We trust our phones and computers with so many things these days. They keep our bank accounts secure, our calendars up to date, and get Chinese food delivered to our houses very quickly. But if you trust them to keep your cheating secrets, they might betray you. Reddit user kjlo5 wrote: “iMessage linked to her computer. I was on her computer buying stuff off Amazon and she was sitting on the couch, feet from me, texting her ex. He was trying to get her to send him nudes and they were reminiscing about previous encounters. He was bragging about how he made her “leg shake" all the while I was watching the conversation in real time, right next to her. My adrenaline kicked in and I simply closed the computer and left the house without saying a word. This was over a year ago and I’m still fighting her for custody of our children."

The worst birthday ever:

Reddit user pedo_troll did not have the 21st birthday he hoped for, instead having the type of night that no one would ever hope for. “In college I shared a large bedroom with my best friend. It was my 21st birthday, and we threw a party at my house. It was getting late and I was wondering where my girlfriend was, I went up to my bedroom and found them in bed together." You’d think sharing a room with someone would make cheating at least slightly inconvenient, but some cheating knows no bounds.

User Sharkbyte12 probably could have gone his whole life without knowing his ex cheated on him, if only math hadn’t betrayed him. “Broke up in April of 2017. Her and new boyfriend celebrated their 1 year in October of 2017." Damn you, subtraction!

It wasn't even a good band:

Reddit user ZerglingHOTS encountered an unwelcome surprise when he went to give his girlfriend a thoughtful present. “I went to surprise her after basketball practice by making her a giant cookie (the size of my freaking face) with some frosting spelled out 'Thanks for being the best' with some nice flowers. I even dressed nice and wanted to surprise her by taking her out for dinner that night to show I appreciate her. Her little sister let me into the house and that's when I saw her [making out on the couch with another dude who was in a shitty band]." But ... um, who got to eat the giant cookie? It didn’t go to waste, did it?

Never trust people who say they don’t use social media:

Before you go off on the person your partner is cheating with, consider that they may be just as deceived as you. According to Reddit user pm_happiness_please, she was shocked to find out she was the girl her boyfriend was cheating with. “He said he didn’t have a Facebook account, but one day I saw that he had the app on his phone ... so I searched him up, and a little stalking later found out: 1. His name wasn’t Sam, that was the dog’s name 2. He had a wife, and the 'family vacation' he had gone on a few months back was actually his fucking wedding 3. I was definitely the side chick." OK, but why did he have to drag the dog into this?

He’s not into yoga — and he has half a brain:

Reddit user GreenGoddess33 knew her partner was cheating when he couldn’t explain a specific interest. “I found a book on yoga down the side of the seat of his car. He most definitely wasn't into yoga." Hopefully she at least got to make him try to awkwardly attempt some downward dogs to convince her it was his book, though.

Ah, the butt dial, normally just a few confusing seconds of trying to figure out if your roommate's ex girlfriend’s sister meant to call you at 3 a.m. on a Tuesday. But according to NorthMahkato, sometimes a butt dial can be much, much worse. “My wife tried calling and didn't hang up once it went to voicemail. She accidentally left a 2:45 VM. The VM consisted of her and her BF talking shit about me and how much happier she was with him. At the time I was home with our kids and I thought she was 1,800 miles away to be with her dying father. Two years later we are divorced and her father is still alive." Wow, her dad did make a miraculous recovery, though, so it’s not all bad.

Oh sure, that makes sense:

There’s a point where you just have own up to cheating, but some people will go to great lengths to deny it anyway. According to user  sir_joustalot: “coming home from a 12 MONTH deployment to a BLACK baby when we're both white were strike one and two. Strike three was telling me she had black relatives (whom I've never met) so that could be what happened, sure. Doesn't matter what excuse You have there isn't a magical 12 month gestation period." No, you don’t understand, she also has family members who are elephants, so her gestation period is longer than usual!

He saved his hook-up's number as his dead cousin:

Reddit user donpianta shared this haunting account of how his boyfriend cheated on him. “I saw that he got a text from his dead cousin while he was in the shower, his notifications showed that the message said 'I really miss you.' I kinda got creeped out and while still holding the phone I saw that the next message to pop up was a selfie of the dude that he was cheating on me with. He saved that dude’s number as his dead cousin’s..." Not to judge, but the best-case scenario for this plan was what? To tell your boyfriend you were texting with the ghost of your cousin?