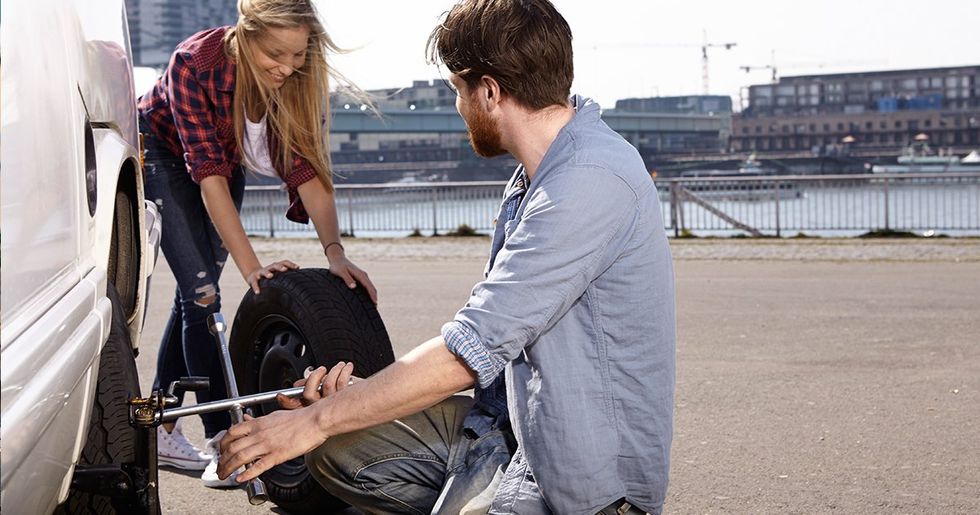 Do you have a story of a stranger doing something nice for you? A random act of kindness for which you were on the receiving end? It is one of the best feelings in the world! Only second to actually being the one to perform the random act of kindness. It is as simple as complimenting a stranger on their scarf or their glasses. But it can also be as complex and selfless as giving up your seat on a plane to a mother and her baby traveling during the holidays.

Twitter master and writer Nicole Cliffe recently asked people to share the nicest thing a stranger has ever done for them, and oh boy the internet delivered. The stories you are about to read will warm your heart in ways you did not even know it could be warmed. They are so wonderful! If you have lost your faith in humanity (and honestly, who hasn't these days), these stories are guaranteed to restore it.

All Nicole Cliffe has to do is ask the internet a simple question.

And the internet pretty much always comes through with incredible answers. Get ready to cry tears of joy!

Nicole started off with a few of her own.

This is amazing. Language barriers didn't matter. Just being there was enough support in a tough situation like this.

This is amazing. The customer clearly heard what was going on and decided to offer her own words of wisdom.

This kind stranger started a trend in the bookstore! All the customers knew what the caller was going through, and so they took time out of their day to lend their support. Tears.

Someone else posted an extremely similar story, only they told their boss they had to miss work for personal reasons and that it would never happen again, and their boss trusted them implicitly.

When I was studying abroad, I was also stranded one night at a bus station in the Netherlands. Luckily, I was with some other people. I wasn't totally alone. But I know the feeling. This is so incredibly nice.

For the first three-quarters of this story, I was terrified! You do not want to be followed by a giant man in a truck after giving him the finger...twice. Glad this story had a happy ending.

OK, this isn't a story about a stranger, but it's great. Men need to stand up to gross behavior by other men. Sometimes it's the only way to stop a situation from getting worse.

I love this story. I'm glad the girls were able to hang out with them for the rest of the day. This stuff warms my heart.

Usually, stories about getting compliments from random dudes in bars are not this wholesome and lovely. I'm glad this one is.

Often, the businessmen in suits are selfishly lost in their own worlds. The "street youths" are the nice ones. You can quote me on that.

This is lovely. If you see someone who looks like they might need someone to notice them, it never hurts to ask if they are OK.

This is way too nice. That had to be a pretty expensive camera! He knew how much it meant to her. Awesome.

@Nicole_Cliffe I was parallel parking and when I got out of the car a homeless guy yelled "HEY... you did a really good job parking"
— Zoe Louisa Lewis (@Zoe Louisa Lewis)1551728222.0

This is so nice! Sometimes, a random compliment from a stranger is just lovely and great, even if you aren't particularly desperate and don't actually need it.

This is really nice if you ignore why the cop has an open bottle of Jameson in the seat pocket of his car. We're going to go with the explanation that he keeps it for moments like these!

@Nicole_Cliffe We ended up sitting around the gate sharing sob stories. One guy was in the army and headed home pos… https://t.co/XgHuxavwfj
— Elizabeth Sampat (@Elizabeth Sampat)1551728564.0

This is a total nightmare situation. Stuck at the airport with a baby, trying to get home for the holidays. And then you don't get on the next flight...

@Nicole_Cliffe I was able to spend Christmas with my family. He didn’t. I’m still choked up about this 15 years later.
— Elizabeth Sampat (@Elizabeth Sampat)1551728804.0

If I was this woman, I would be in tears. In tears from the ordeal, and then in more tears from the kindness of strangers. I'm choked up about it; I can't imagine having it actually happen to me.

Oh man, it sucks that we live in a world where men being nice is an anomaly, but here we are! Catcalling stories turned wholesome are a whole genre of responses to this thread, as you will soon see...

@bananafitz @Nicole_Cliffe I once sneezed while walking past a construction site, and then received a loud chorus o… https://t.co/fUUKEbctee
— Beamish Ghoul (@Beamish Ghoul)1551727238.0

Gotta love a whole legion of polite construction workers blessing you after sneezing! This story made me smile.

I mean, who can resist this face? The answer is no one. No one, not even a bunch of construction workers could resist that face.

This is so sweet! I hope this guy bought this necklace for his wife and that it wasn't just a ploy to talk to a passing stranger. But don't talk to me! I'm a natural cynic about these things!

@Nicole_Cliffe in the late stages of labor and my mom straight up finished delivering her baby in the front seat of… https://t.co/h7DyeTaMi1
— Lydia Albano (@Lydia Albano)1551730930.0

Um, this is legit hero status right here. I could not imagine the poise it took to deliver a frickin' baby on the frickin' side of the road. Holy moly.

@Nicole_Cliffe I fainted on the subway once and a kind, elderly Chinese woman who spoke no English waited with me,… https://t.co/k5rq2mBj5W
— Lauren Rankin (@Lauren Rankin)1551734010.0

Oh man, I wish this woman showed up anytime someone fainted. What a calming, lovely presence! I almost want to faint just so she will show up.

This is so nice! That has got to be scary. I am so glad several people stopped and helped her. Don't worry; they also called an ambulance.

@Nicole_Cliffe Ex and kid and I had just gotten off a red-eye flight during which the baby was overtired, feverish… https://t.co/ohAhFrh4tu
— andi zeisler (@andi zeisler)1551728114.0

Sometimes, a little comment, a little reassurance that you are not a total failure, is all you need. I understand the exhaustion, the helplessness. This is so nice.

Reading this list, I never expected that one of the kind strangers would be a dog! But oh, what pleasant surprises the world affords us!

@Nicole_Cliffe A TA found me hyperventilating and sobbing because I had missed the final. She scheduled a make up a… https://t.co/gCJZ7muy2i
— alicia (@alicia)1551729385.0

This is a really classy move. We all make mistakes sometimes, and we all have dreams about missing a deadline. When it actually happens to you, I hope you have a TA as nice and reasonable as this one.

This is not only really nice, but this is also completely important. The idea that you don't call the cops on people experiencing mental health distress is a matter of public safety.

@Nicole_Cliffe And they gave me water and medicine and let me sit with them and cry. It was Shepard who initially a… https://t.co/B6XoPMxaHV
— Lizzie O'Leary (@Lizzie O'Leary)1551727880.0

This is terrible, I'm so so sorry she went through this, this sounds like an awful ordeal, but also wow it's kind of cool that the people who helped her happened to be Sam Shepard and Jessica Lange. I mean, come on, that's amazing!

@Nicole_Cliffe Saved my life by breaking a window and pulling me out of a burning house when I was 7. Broke his wri… https://t.co/pw1Vo1hcxO
— AWhitneyBrown (@AWhitneyBrown)1551834115.0

This is incredible, and I didn't realize this until just now but the kid in the story is former SNL writer A. Whitney Brown! Amazing! Share this with someone to make their day.