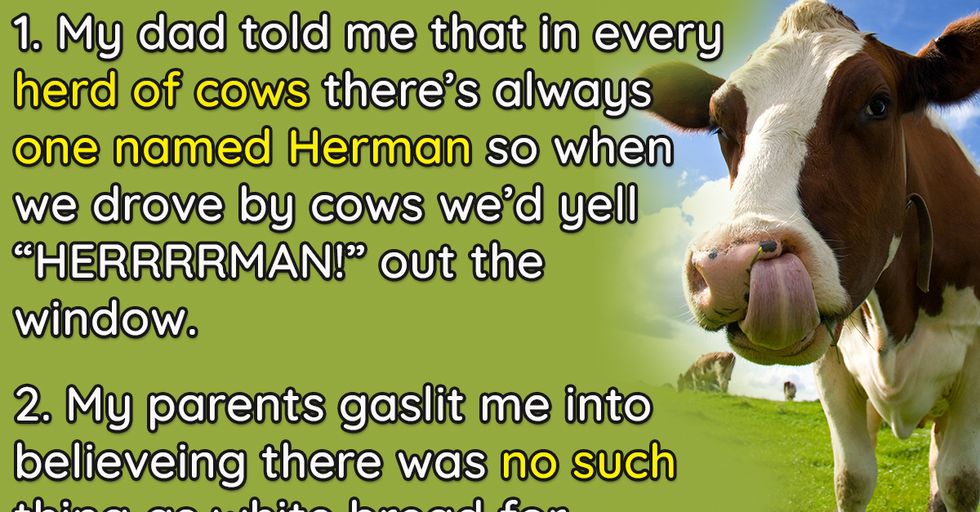 Look, sometimes parents gotta do what they gotta do to maintain peace in their household. And occasionally, that may involve lying to their children. Don't act like you've never done it or that it's never happened to you.

One of my good friends said that when she was little, her dad told her that when she opened her mouth, her face would disappear. For a good long while, she thought she had this neat trick in her pocket that no one else could do. Needless to say, worlds came crashing down when the truth was revealed.

People started sharing all the crazy lies their parents convinced them were true growing up, and they're insane and hilarious. Do you have stories like these?

Nicole Cliffe started it off with the story of how her kids found out that Scooby Snacks weren't plain wheat crackers:

We all felt her pain when she said "the whole system collapsed in under three minutes." Soon, others began sharing stories of how their parents tricked them when they were little, and many of these tales were quite harrowing...

This person's ninja parents convinced him that a burglar snuck into the house and only took the voice box out of his annoying talking Bugs Bunny. Honestly, they deserve a medal.

To be fair, these parents would have probably lived in a nightmare if their kids knew how close they lived to Disneyland. But my oh my is that some commitment to a lie.

@Nicole_Cliffe My parents told me my goldfish ran away to be with his mom and I believed them for years!
— liz charboneau (@liz charboneau)1516673547.0

OK, this is funny but how little was Liz when this happened? Because even as a small child I think I would have figured out that goldfish couldn't run away. They have no legs!

It's impressive that it took three whole years for Andrew to see a cockroach upstairs. But isn't it just the worst when you find out your parent, the person you've trusted to care for you your whole life, has been lying to you?

This is honestly an incredible story and I could see it being a C. S. Lewis-type epic series. However, to let it get so out of hand that your kid tries to do a presentation on it in school...well, that's a bit much.

Sometimes parents are so genius with their falsehoods that you can't even get mad at them because it's just so funny. Why try to convince your child that every herd of cows has one named Herman? Why not? That's the real question we should be asking.

This is actually brilliant. Chances are by the time it's your kid's "turn" to throw his/her tantrum, they're done being mad. Ah, the ever-changing moods of our youth!

Ah, white bread, the white whale of bread for Mr. Sean Lynch. Sean's parents' effort is all for naught though because apparently, wheat bread is no better for you than white bread. Put that in your bread basket and eat it.

This parent is doing quite a job lying to her kid about what juice is, and that child is going to have a rude awakening during his/her first animal cracker and apple juice break in pre-school. Such a young age to lose faith in your parents...