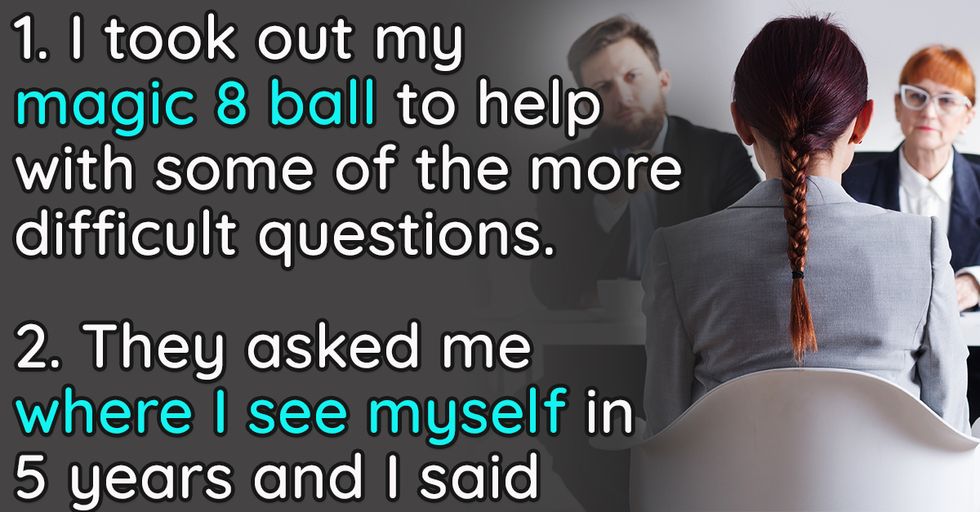 Finding a new job can be tough. Resumes, cover letters, interviews, thank-you notes — it all gets so overwhelming. On the other hand, you kinda need a job. You know, for money. Until we're all back on the barter system, that is. It's only a matter of time, right?

In the meantime, here's a list of things not to do next time you find yourself in a job interview.

Every once in awhile, Twitter users come together over a trending hashtag. You may suddenly find your feed overwhelmed with tweets about the same topic, and it's actually pretty great.

Recently, the hashtag #IBlewTheInterviewWhen started trending. People responded to it with the most hilarious ways that someone could blow an interview, and wow, yes, pretty much all of these would immediately result in no job for you. Maybe ever.

It's good to be honest, but this might be just a little too honest. I can also confirm that when they ask you, "Why do you want to work for us?" you shouldn't say, "Because I need money."

In this person's defense, I also have difficulty differentiating between fantasy and reality. That being said, this person is obviously Batman, and they should get any and every job they apply for.

I actually think this is a great way to get a job. Maybe you could throw in some POWERful POINTS for good measure. And always keep a positive OUTLOOK. That's how you'll gain ACCESS to your next job.

This, on the other hand, is completely inexcusable. And speaking of horrible Twitter-related interviews...

Yeah, anyone asking for payment in the form of retweets is clearly a bad person. That being said, retweets are free. If you're looking for a cheap employee, this may be the way to go.

#IBlewTheInterviewWhen i reenact the audition scene from flashdance. The interviewers from Goldman Sachs were not i… https://t.co/uL9rsDEiy7
— Johan Hulaimi (@Johan Hulaimi)1516725218.0

Listen to me, Johan Hulaimi, and listen well: Don't you ever waste your time on anyone who doesn't appreciate the audition scene from Flashdance. You did a good job. (You just didn't get a good job.)

On the plus side, using the resources available to you is definitely something you could list as one of your strengths. Unfortunately, you might not get that far into the interview after you say "Try again later," for the third time.

Dress for the job you want, huh? What does a billionaire who owns 300 dogs wear? Asking for a friend.

This one is brutal:

#IBlewTheInterviewWhen I couldn't think of any reasons they should hire me https://t.co/7qGuWsoikM
— Hillary Miller (@Hillary Miller)1516723301.0

Yikes. Have you ever bombed a job interview? Tell us your story in the comments!