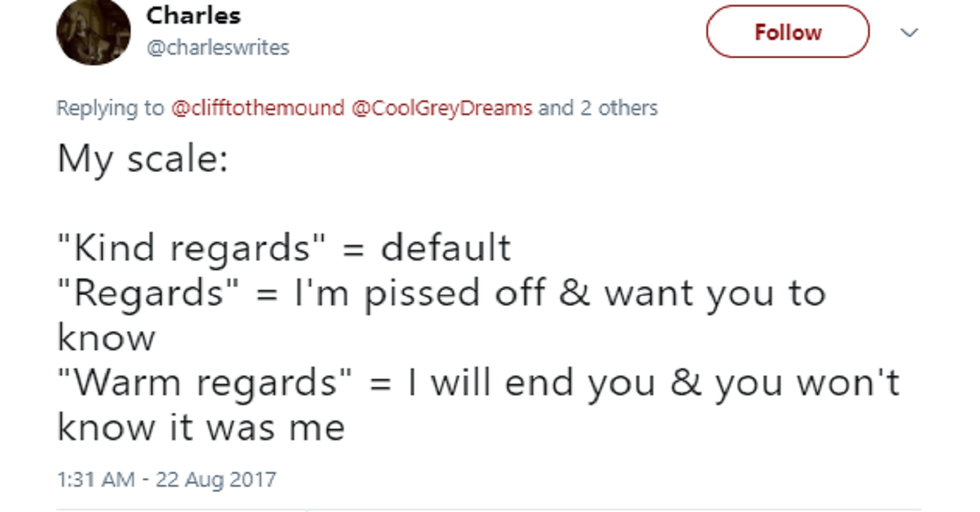 People Are Sharing the Most Petty, Passive Aggressive Phrases They Use in Work Emails and They Are All Too Familiar

Maintaining professionalism at work can be a challenge sometimes, especially if you have to deal with difficult co-workers. So, as much as you might want to berate someone for not replying to your last five emails, you have to keep your cool.

However that doesn't mean there aren't ways you can clap back, you know, professionally.

Unless you have the world's best co-workers, office life can be a serious drag.

And, as great as it would be to tell everyone to screw off and leave you alone, you can't exactly do that without big repercussions.

However, there are some ways you can be a little sassy while still being professional.

If someone ignored or hasn't replied to what you just sent them (which happens too often), you can hit 'em with the "per my last email..."

Somehow maintaining your professionalism can be even sassier than losing your cool.

We all have a little bit of sassy elf Joseph Gordon-Levitt in us. Let him free!

People started chiming in with their own favorite professional clapbacks and they're too good.

Slay them with "an effort to maintain clarity", and they won't know what hit 'em.

Seriously, take notes. These are great.

Why does that cut so deep? The professionalism ratchets up the sass levels tenfold like this next one.

This is the clapbackiest of clapbacks.

"If someone else is better suited for this request please direct me to them," is basically the professional way of saying, "if you can't help me then show me someone who can." They're gonna need some aloe for that burn.

Some of these sass so hard they just make you want to snap your fingers while you say them.

Or some sassy hand claps if you really need to drive it home. Don't send emojis in an email though. Just do it in your head.

It's always great when people just don't reply to your emails.

Very few things are more infuriating than being ignored, but if you keep your cool and passive-aggressively jab at people then you might just get their attention.

Or you could go for a slightly more subtle approach.

"Any updates on this?" NEVER fails to get a response, even if the response is no.

Everyone has their own sassy way of ending emails too.

Some reply with a simple "Best" or "Thanks", but now we're gonna be just a little bit paranoid about how people sign off on emails in the future. But this next email sign off will really get you thinking.

One user shared his very specific sass scale for his responses.

If Charles ever wishes you warm regards, you have messed up.

There's almost nothing more frustrating than having to repeat yourself over and over.

Knock 'em dead with the "as previously stated", and they'll never be able to look you in the eye again.

If something seems especially stupid (but you don't want to outright say it) you can always hit them with this gem.

"Please let me know if I misunderstood" is a surefire way to get someone to repeat what they said out loud and hear how dumb it is first hand.

And the best way to avoid the blame for those dumb ideas, in a professional way of course...

Always save your emails kids. You never know when the chocolate ice cream will hit the fan.

Last but CERTAINLY not least: The ability to deflect responsibilities that aren't yours is the key to a happy job.

And the most professional way to say "that's not my job" is as simple as "that's outside my scope of work." You'll never have to do anyone else's job ever again!