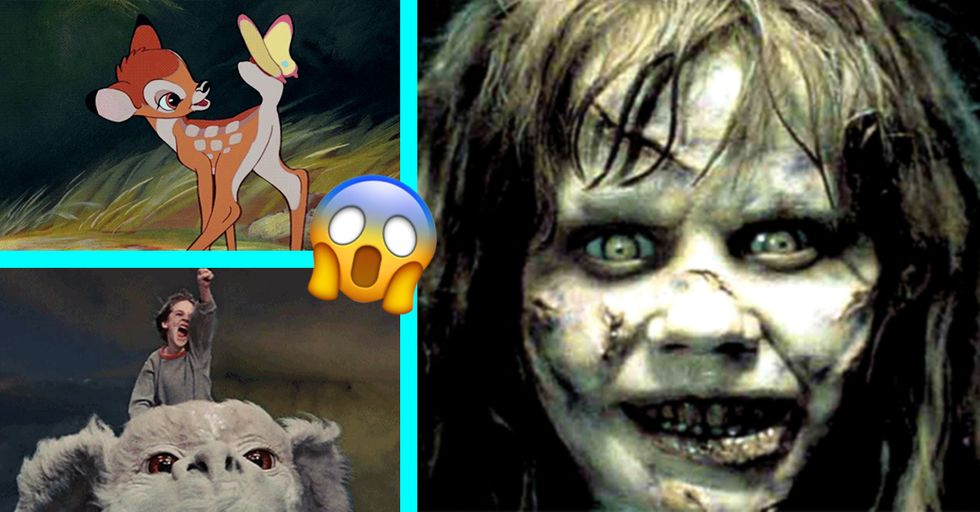 For me, it was the movie Look Who’s Talking Too. No, I’m not talking about what my favorite talking baby movie was, I’m talking about a thing that’s been going around the internet lately: what movie traumatized you as a kid? Sure, Look Who’s Talking Too may seem like an innocent, funny movie about babies who are voiced with adult dialog (the sequel to Look Who’s Talking, another popular movie about babies voiced by adults. We loved talking babies in the '90s, okay?), but there was this one scene: the toilet scene. The kid has to use the big boy potty (or maybe he’s having a nightmare about using the big boy potty? I don’t really remember and truthfully I’m not willing to re-visit it) and right before his eyes it transforms from a regular well-meaning toilet into a monster toilet with fangs, begging for his urine. It was supposed to be funny but that scene terrified me. For years I refused to go to the bathroom at night without supervision.

It probably didn’t help that when I was about five years old my older brother once ran screaming from the bathroom saying that a rat had crawled up the toilet while he peeing, introducing my siblings and I to the idea that toilets are not a strictly one-way contraption. Was there really a rat in the toilet? We never found out, he flushed before anyone could see and the babysitter who was taking care of us at the time poured a half a bottle of Drano down there just to be sure it would not re-emerge. I truly hope my parents paid her a lot of money that night. But between the rat incident and the angry monster toilet from Look Who’s Talking Too, you better believe I was a toilet hover-er for most of my childhood, certain that if my butt touched the rim the whole thing might suddenly grow fangs and swallow me down to wherever that rat went.

Later, I would go on to see much scarier movies (Thanks, Lillian B’s mom for letting us watch The Exorcist at her 12th birthday party, you basically ensured I got no sleep for the entirety of 6th grade), but nothing stuck with me quite like that evil toilet. Sometimes the things that traumatize us most as kids are not actual horror movies, but parts of movies that hit on our specific fears or anxieties in just the perfect way. I’m sure the writers of Look Who’s Talking Too never thought: “wow this toilet scene is really going to mess some kids up”, they probably just thought “haha funny angry toilet.” And yet...

This week on Twitter, people were sharing the movies that traumatized them as kids.

This was thanks to a prompt by Eric Alper, whose tweet thread really took off.

Disney is very into killing off characters’ parents. The Lion King, Finding Nemo, Frozen. But for some reason Bambi is the saddest, because his mom was killed not by a hungry barracuda or a random shipwreck or a jealous brother but just by a regular human. Dark.

Even Netflix had an opinion.

If you don’t know, they are referring to the dinosaur part of Fantasia, which is legitimately terrifying. We all knew as kids that the dinosaurs all died, but seeing it happen was like a realization that life is finite and that everyone you love one day will die. It very heavy content for a children’s movie.

Uggggh the horse scene from The Never-Ending Story.

I tried to watch this movie as an adult and it very quickly became the Ending Right Now Story because I couldn’t get through this tragic horse death.

I didn’t see Alien until I was an adult and I STILL was traumatized by just worrying about the cat.

WHY WAS THERE A CAT ON A SPACESHIP IN THE FIRST PLACE? But also spoiler: the cat is okay in the end.

I will cry just thinking about My Girl.

HE CAN’T SEE WITHOUT HIS GLASSES. Whelp, here we go.

Sometimes it wasn’t the movie so much as... the opening credits?

@ThatEricAlper Any movie that started off with this terrifying horse https://t.co/lHvjAE4X5V
— John Jusino (@John Jusino)1516077593.0

You can’t control what scares you, I guess. Even if that thing is a begin flying horse.

Willy Wonka & the Chocolate Factory is an all-around scary movie.

ALL OF THE KIDS EXCEPT CHARLIE DIE. THEY DIE. I don’t care what Wonka’s excuses are, those kids are not alive anymore.

I did not know this movie was a comedy until I re-watched it as an adult.

I have never thought about Peter Pan’s shadow being scary, but it really is when you think about it.

Why does it have a mind of its own?!

@ThatEricAlper Where The Red Fern Grows. Two beloved dog deaths for the price of one. The second dog dies of sadnes… https://t.co/iD3y5psyGZ
— Jim Butcher (@Jim Butcher)1516118872.0

This was the first book that made cry. I remember lying in my bed just sobbing. I refused to ever watch the movie because once you’ve read in GREAT DETAIL how a dog’s insides were tangled in a bush you pretty much get it.

It is a truth universally acknowledged that every single person on earth saw Poltergeist at too young an age.

Poltergeist. I was way too young to have watched it at the time. Plus I had a giant tree right outside my window an… https://t.co/Fof9iyLDkj
— Josh Walrath (@Josh Walrath)1516033082.0

There may never be an age when that movie is appropriate. I’ll get back to you at 100.