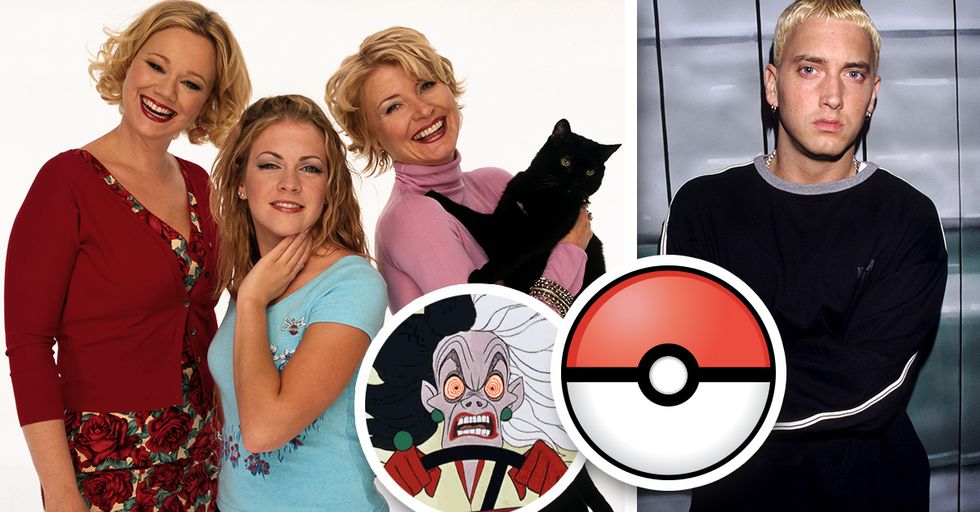 The importance of having parent figures in your life cannot be overstated. They're there to show you right from wrong, teach you all the right words for things, and compliment your art (even when it isn't that good).

They're also there to guard you against harmful influences. But sometimes, they take things a bit too far...

Nick Douglas is a Twitter user who took to the social platform to ask people about the funniest pop culture item their parents had ever banned from their lives.

Speaking as someone who was not allowed to watch Pokémon because it featured evolution (yes, that is a 100-percent true fact about my life), I knew that this was the thread to watch. These are my people.

Apparently, Nick was inspired by this article about Katja Blichfeld, who was not allowed to watch The Smurfs.

Same, Katja. Same. (Although I wasn't allowed to watch The Smurfs because of all the times they used the "Smurf it!" euphemism.)

The answers two Nick's questions quickly started flowing in. Like this poor soul, who wasn't allowed to enjoy Will Smith's album:

I love the detail of the CD being broken in two, but still left in his room. This person's parents knew exactly what they were doing.

This follow-up makes things even sweeter:

There's something so retrospectively delightful about the lack of consistency of parenthood rules. For instance, I wasn't allowed to watch Pocahontas because there was a magical talking tree, but the magical genie from Aladdin was A-OK. I have no idea why. I never brought up the hypocrisy because it would have absolutely resulted in getting Aladdin taken away.

Some parents had huge aversions to witchery:

That is definitely rough. At this rate, you'd think their parents would also have outlawed sandwiches. (Eh? Eh?) But at least there were actual witches in this person's examples. The next responder wasn't quite so lucky...

Their parents just assumed Cruella de Vil was a witch.

@toomuchnick I wasn’t allowed to watch 101 Dalmatians because my parents thought Cruella Deville was a witch.
— KRSTFR (@KRSTFR)1515607725.0

Which (teehee) is just ridiculous. Her name clearly indicates she is a devil.

The worst was when your parents banned something without even fully understanding it:

If you're gonna force your kid to go through the pain of not being able to consume a particular piece of culture, at least do your homework and make sure it's actually bad first, ya know?

This mom went above and beyond on the homework front:

@toomuchnick My mom whited-out the glasses in this poster in my bedroom so it'd look like they were drinking milk i… https://t.co/hpivJZBqnI
— Cole Stryker (@Cole Stryker)1515609190.0

Here's a beautiful tale of redemption:

I feel like this may be the only time in history that the phrase "you'll get it when you're older" actually turned out to be true, and not just something parents say when they don't feel like explaining things.

More often than not, parents' bans end up epically backfiring.

When my brothers were told they couldn't have toy guns, they grabbed slices of bread and bit them into gun shapes. Life, uh, finds a way. (No, we weren't allowed to watch that movie, either.) This next one may be my favorite...

@toomuchnick Wasn’t allowed to watch Hey Dude on Nickelodeon...because they were teens so they must be up to no good.
— Chris Todd (@Chris Todd)1515606182.0

Honestly, this logic is pretty sound. If there's trouble afoot, you can bet teens are somehow involved. (Unless it's actually the babies from Rugrats, who my parents said had bad attitudes.)

Bad influences can be found anywhere. Even from animated beavers.

@toomuchnick I was banned from watching Angry Beavers and Ren and Stimpy because they “taught me how to be mean to my siblings”
— tine (@tine)1515608249.0

Did these parents not realize kids are basically born mean? The cartoons have very little to do with it.

Sometimes, you just need to see the name of something to know it's bad.

Surely the band must have known this would happen when they chose their name, right? Imagine how many kids had to explain that there were no barenaked ladies in the band. Or ladies at all! (Or bears, for that matter.)

Look, kid — I'm with your mom on this one. If your brother couldn't figure out the very simple act of putting his hand up, he got what was comin' to him.

Yep, this one makes sense, too. There are some things parents simply have to ban out of self-preservation. You know, like Caillou.