People Are Sharing Their Dreams on Twitter, and They're, Well... Pretty Bizarre | 22 Words 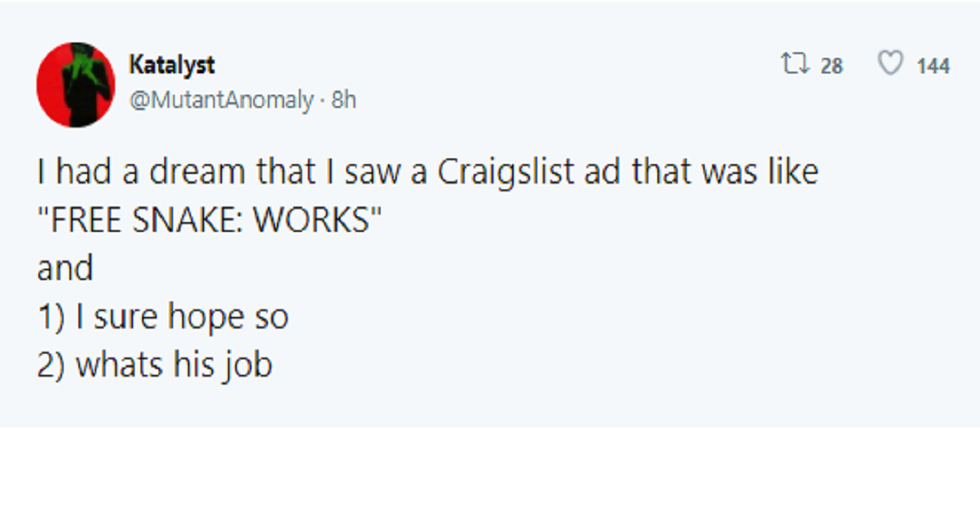 People Are Sharing Their Dreams on Twitter, and They're, Well... Pretty Bizarre

The human mind is a powerful thing. Aside from all the obvious amazing things we've been able to accomplish with our expanded brain capacity, one of the more interesting things for some people is the subconscious, and more specifically, dreams.

Maybe it's because I have such mundane dreams myself, but I've always enjoyed hearing about other people's dreams. When Twitter users shared their dreams, things predictably got weird.

I mean, things are usually weird on Twitter, but these dreams take it to a new level.

I think a lot of people dream that they're back in school, but the Lil' Wayne fruit kebab thing is less common.

I think it's more accurate to call that one a nightmare though.

Maybe something a little more uplifting after that.

If only the world was actually as pure as sharing ice cream with seven golden retriever puppies. Unfortunately, it's more like sharing an empty beer can with a skunk.

A few of these make me glad that my dreams are boring.

It's OK to be afraid of your own mind — and if I dreamt about haunted freezers then I probably would be too.

Sometimes, your shoes are chicken salad.

The only reasonable explanation for most of these dreams is some crazy sleeping medication. Like this next one.

Microwaving your own eyeballs is something one could literally only dream about.

The solution here is to microwave the eyeballs without the contacts, obviously!

This one is more mundane, but equally hilarious.

I liked the Sega Dreamcast though.

Others are a little more bizarre however.

A girl whose sister is actually a cat! Sounds like the plot of a bad 90's TV series.

The only thing I want to know: How did he know she taught English?

Meeting celebrities is something that people often dream about.

But dreaming about being a celebrity is pretty unusual. Stay weird, Twitter.

And stay weird they do! Another common thing that people dream about is having superpowers.

But using those powers to figure out your bar tab beforehand, well that just is ingenuity at it's finest.

The pineapple on pizza debate has never been more heated.

So heated that it's seeped into this girl's subconscious. Pineapples are kind of like golden oranges.

Speaking of oranges, this one was a favorite of mine.

Another celebrity encounter dream, but this one ends with having the police called on them instead. There's always a twist with these dreams.

This is so dumb that it's funny.

But judging by some of the other weird Craiglist ads we've seen, we wouldn't be surprised if there was something like this actually up there.

There is nothing like the imagination of a child though.

Keep that imagination kid! Don't let the world tell you that you can't be a T-Rex!