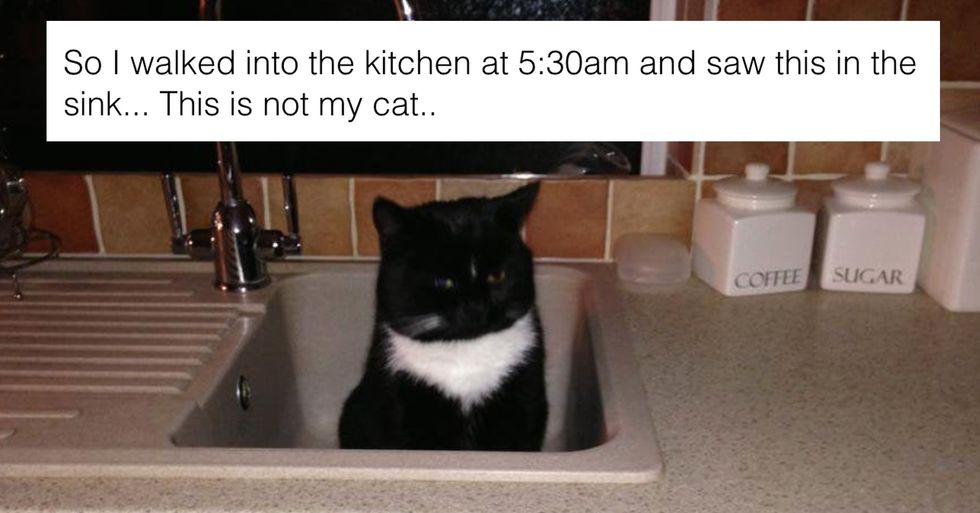 You don't simply own a cat, as some Reddit users have found out when their fury felines picked their masters (or servants) for themselves.

It's definitely an odd way of acquiring a pet, but cat-logic should never be questioned, as you'll find out in the hilarious pictures below...

This is what happens when you feed a stray kitten...

He had no other option but to say yes...

But can they please do it in my yard.

This guy just wanted a smoke...

He ended up with more than he bargained for when he turned back around.

You should really do something about that...

Try putting more catnip down, that should fill the decking out a bit.

You could find a lot worse in your sink.

He looks overfilled with authority.

The only thing in my garden is a plastic deck chair.

The cat now owns you.

It was only a matter of time.

This is indeed how you get a cat.

Another cat found in the garden...

Will somebody please send me the name of those seeds!

Little does he know that he too now has a cat.

Don't you just hate it when someone walks in on you breaking in?

I don't think the cat is the problem...

Everyone else sees the crocodile too, right?

They come in all shapes and sizes.

Rectangle just happens to be on-trend.

Someone woke up to this on their balcony...

Don't feed them after midnight.

Is there anything better to wake up to?

Something caught this guys eye...

When he turned around, he realized he doesn't have a cat... He does now.

It looks like you have a bad case of cat.

You might need some sage to cleanse the area. Just a thought.

Is that an actual question?

Yes, you should keep him!

Oldie but a goldie...

This little guy wouldn't budge, he just had to come along for the ride.

I think I'm in love.

Maybe it's all just a dream.

Prettiest bunch of flowers I ever did see.

You've got to admire his commitment.

All cats were born equally cute...

This guy was visiting his girlfriend when he got woken up...

You guessed it... they don't have a cat.

After working in the office for an hour, this guy thought he'd finally gone mad.

It was just a cat.

This little guy just wanted to steal some hard-earned warmth.

Am I talking about the cat or the guy? You decide.

You're just going to have to move house.

10 cats, there's not much difference.

These little babies were left on the front porch...

Especially now you have a cat.

What a strange rug you have...

Look at that cute little face.

Well, you do now.

On the porch this morning, in your heart forever.

She was fighting off the monsters.

She's right behind you.

He just went to take the garbage out...

One mans junk is another man's treasure.

"Petting, is that what you call it? Ghastly."

His house was completely locked, but when he got up in the middle of the night, this was staring at him.

A cat appeared on this guys sofa...

He looks just as shocked.

It's all or nothing.

Do you have a moment to talk about our lord and savior? If that hasn't satisfied your appetite for cat content, keep scrolling to get seriously jealous of some carefree kitties...