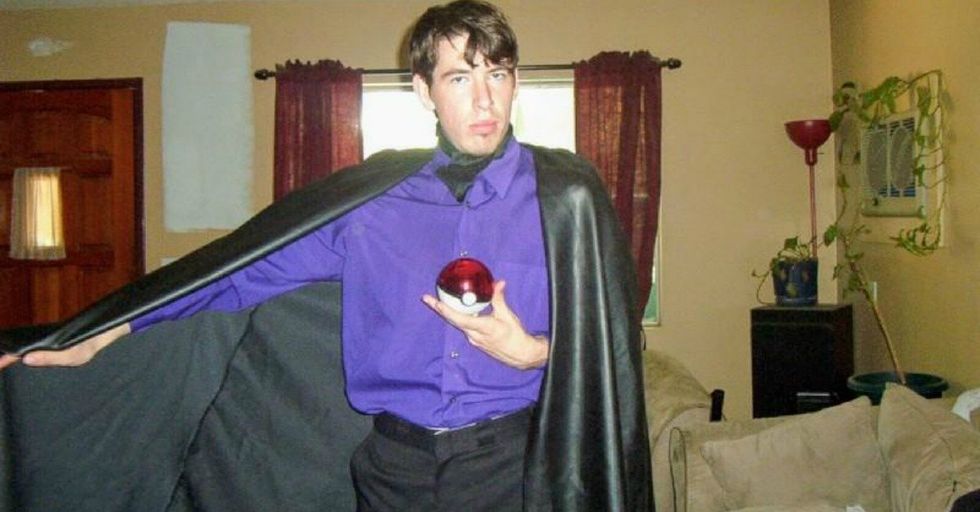 Ah, the awkward teenage years. Most people would qualify their teens as their most uncomfortable and cringe-worthy time, and honestly, those who don't sound pretty darn boring. You need the struggle of painful adolescence to turn you into a funny, interesting person, and the people who coasted through their high school years with their normal, non-ridiculous-looking hair and flawlessly zit-free skin will never know the heartbreak of eating your lunch alone or playing Magic the Gathering at home alone on prom night.

While you might have the urge to burn all evidence of these formative years, luckily, photos still exist that document this difficult time, and we can all experience a collective therapeutic moment by enjoying them. So get ready for a whole lotta awkward with these 30 hilarious childhood photos. They just might make you feel better about your own cringe-worthy years. Although letting go of that shame completely is still probably a few years of therapy away.

My brother had these exact same sai weapons, and I'd venture to bet that a photo almost identical to this one exists somewhere in my parent's house. It's comforting to know that for blackmail purposes.

Looking for a short, buzzed look without sacrificing your beloved bangs? Have I got the hairdo for you!

Any time you're trying to look "cool" in a photo as a teenager is a guaranteed fail. Although to be fair, those goggles are pretty spectacular.

Was the "award" actually just something arbitrary that they give out to kids who will never win an actual award? Because, based on this photo, that makes the most sense to me.

It took me far too long to realize that these two photos were not taken on the exact same day. How has this guy managed to avoid aging for 15 years?! Is he a vampire?!

Myspace is to blame for so many photos exactly like this one. I wonder if he still has this cape and busts it out when he's feeling especially theatrical.

I'm pretty impressed that the photographer didn't make a quick call to child services after taking this photo. At least they didn't go so far as to make their baby goth as well. That would just be downright cruel.

The combination of this amazing vest and the fact that she looks like she's screaming make this photo truly spectacular. Now that I think about it, I'm pretty sure I had a nearly identical vest myself, and would only ever pair it with a turtleneck and my favorite Scrunchie. Because, duh.

The Evanescence CD, the Sketchers sneakers... Honestly, this could have been me in middle school.

I'm dying to know how they achieved the steamy look of this epic pic. Are you telling me that there were fog machines available for my senior photo shoot and I was not made aware of this fact?!

I thought the same thing, but luckily my mother stopped me before I could do too much damage. But hey, baby bangs are in now, right? She was just a little bit ahead of her time!

I would never had guessed that this photo was altered in any way. It looks so natural!

I'm not usually one to body shame babies, but good God, this kid has a massive forehead. Hopefully, he grew into it?

Not only do the hair and glasses scream "middle-aged," but the sucker sticking out of her mouth totally resembles a cigarette. She might as well be screaming at her kids to bring her another Coors.

I didn't know how to smile like a kid either. Luckily, my mom knew this and never forced it upon me. Otherwise, all of my photos would have looked exactly like the one on the right.

What was it about the late '80s/early '90s that forced children to look 30 years older than they actually were? I blame the bangs.

'Ginger hair? Freckles? Pale skin? This kids going to be too popular at school. Can you level the playing field a bit?' - Parents to hairdresser : blunderyears from blunderyears

As a ginger myself, this photo hits home for me. So many bad haircuts....so much teasing from classmates... Excuse me a moment while I compose myself.

This girl's prom date had to have given her a wide birth on the dance floor for fear of losing an eye from that hairstyle. I do admire her determination, though.

How did anyone look in the mirror after frosting their tips and say to themselves, "Man...I look good." It just doesn't make any logical sense to me.

If you photoshopped a two-toned goatee onto this child the resemblance would be uncanny. Is this guy sure he knows who his father is?

As a die-hard Star Trek fan myself, I find nothing wrong with this photo. Which probably says a lot about what my own adolescence was like...

This is the kind of childhood photo that your siblings save and bust out on your wedding day in front of all of your guests.

In the '90s, most pants were under the incorrect assumption that your crotch was 12 inches long and your waist was actually located directly below your ribcage.

This is a bold choice for your senior photo. I really admire the fact that she went so far as to glue hair to her feet. It's all about the details, people.

The pureness of this photo is enough to melt even the coldest of hearts. I would watch a buddy comedy of these two.

This is peak '90s parents right here. That woman's hair is so high that it's barely contained within the photograph.

Again, I really don't make a habit of making fun of baby faces, but...I mean...how can you NOT laugh at this photo?

Nothing says "prom" like silver JNCO jeans. At least he could hide a LOT of contraband alcohol in those massive pockets.

And, finally, I give you the pièce de résistance of awkward teenage pics. If this guy was not an Insane Clown Posse fan I would be seriously surprised.