People Are Sharing Their Worst, Nerdiest School Memories and the Cringe Is Real | 22 Words 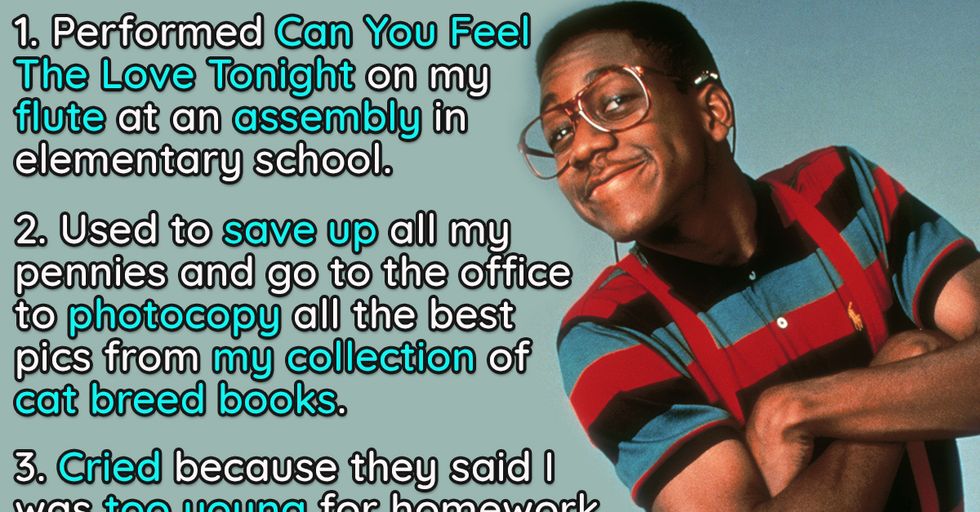 People Are Sharing Their Worst, Nerdiest School Memories and the Cringe Is Real

Everyone is at least a little bit awkward in school. Even the popular kids. But some of us were more awkward than others. Luckily, most people manage to make it to the other side (aka the "real world") at least relatively unscathed. When you're a grown-up adult with a paying job, your embarrassing childhood memories remain almost completely forgotten about. At least until one night when you're trying to fall asleep and suddenly remember every embarrassing thing you've ever done in your whole life in excruciating detail. (Thanks a lot, brain.)

But Twitter user Sarah_Woolley wasn't content to let those memories remain a secret. She decided to ask people about their dweebiest school memories and — holy moly — the Internet delivered.

Sarah started things out with her own dweebiest school memory:

Giving a 15-minute presentation on tiny ceramic animals at the age of 11, but it's not like you created a PowerPoint presentation for your college boyfriend when you started dating. That would be insane and ridiculous, and it is definitely not something that I definitely did. (I did that, actually. But he married me, so joke's on him.)

Sarah was apparently not content to share just one embarrassing memory. She also blessed us with this gem:

One day the teacher asked us to play our favourite songs in class and - much like James Murphy playing Daft Punk to… https://t.co/nlaO7LlznR
— Sarah_Woolley (@Sarah_Woolley)1516968639.0

To be fair, "The Celts" is a verified banger. Although it is no "Orinoco Flow."

People jumped at the chance to share their own dweeby memories. Like this person, who dreadfully misunderstood the point of Show & Tell:

As embarrassing as this may have been in the moment, it's also actually pretty sweet. I bet your grandpa had a wonderful time!

Remember the kid in your school who used a rolling backpack? This is their origin story:

The only thing that redeems this particularly dweeby story is the fact that the child in question was a young Ruby Tandoh, aka one of the best competitors on Great British Bakeoff. If she can live through reciting a poem to her class on a whim and still go on to enjoy success, you can too. Did you like books in school? Probably not as much as this next Twitter user...

Imagine being a master on ancient Rome by third grade. Where do you move onto from there? You're pretty much peak nerd at that point. (Which is nothing to be ashamed of!)

That's nothing. During the summer between fifth and sixth grade, I decided I should start practicing how to write reports. I literally gave myself homework.

This person clearly misunderstood the initial question. You were supposed to answer with dweeby stories; not stories that prove you were 100 percent awesome as a kid.

Maybe they were just jealous and super impressed! Probably not, though. At least you learned a good skill (and a very important lesson about how not to make friends, apparently). If you were a rule follower in school, you're going to sympathize with this next kid who was obsessed with the dress code...

Honestly, in today's world where kids are getting dress coded for all kinds of ridiculous reasons, this may not have been the worst instinct to act on.

And speaking of the way you dressed in school...

There's "fan of Lord of the Rings" level nerdy, and then there's "Treebeard fan club" nerdy. They are two very different things. I would have been your friend either way, though.

I hate to break it to ya, Coleen, but most people do not have a "favorite kind of seaweed." You were an ornithologist! Ask about birds! People like birds!

Finally! Someone else who made PowerPoint presentations for fun. These are my people. And look at us now! We made it through school and can look back on these embarrassing memories and cringe. All those dweeby years were totally worth it.