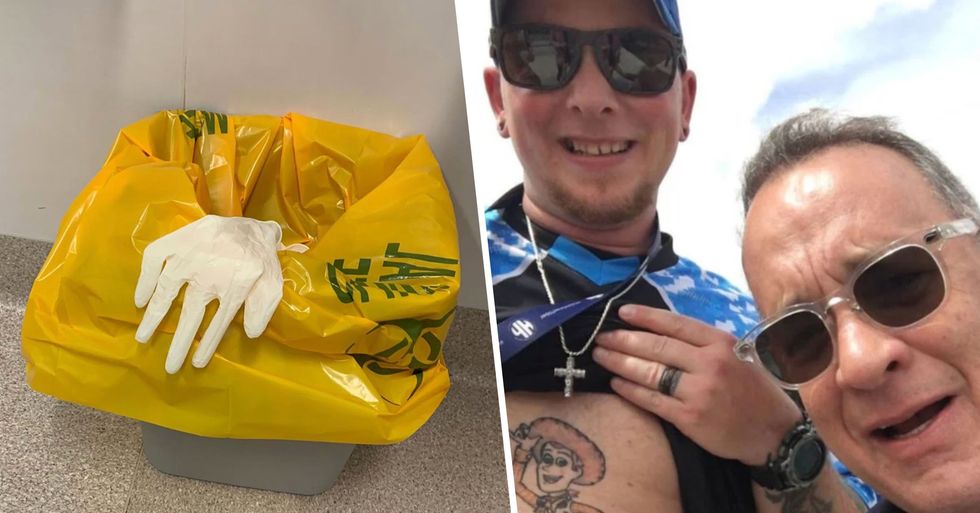 Yesterday, the world was shocked when Hollywood icon, Tom Hanks, revealed that he has been diagnosed with the deadly coronavirus.

Millions of his fans have been sending their well wishes, but others have been sharing their own wholesome stories about the actor.

Keep scrolling to read the best ones...

Hanks has starred in and produced so many timeless productions, and has even been honored with the Lifetime Achievement Award at this year's Golden Globes.

Forrest Gump, which was released in 1994, followed the story of an Alabama man with a low IQ living through some of America’s most iconic and life-changing events, such as presidencies of J.F Kennedy and Johnson, the Vietnam war, and Watergate.

But he's also known as being one of the nicest guys in Hollywood.

So, quite understandably, people were horrified to hear that he had caught the deadly coronavirus over the weekend.

Where he shared an image of a discarded doctor glove with the caption: "Hello, folks. @ritawilson and I are down here in Australia. We felt a bit tired, like we had colds, and some body aches. Rita had some chills that came and went. Slight fevers too. To play things right, as is needed in the world right now, we were tested for the Coronavirus, and were found to be positive. Well, now. What to do next? The Medical Officials have protocols that must be followed. We Hanks’ will be tested, observed, and isolated for as long as public health and safety requires. Not much more to it than a one-day-at-a-time approach, no?"

He and his wife are currently in quarantine.

But he seems to be doing well, and posted a health update yesterday to reassure his fans that the virus hasn't got the better of him just yet.

Because, obviously, people have been completely losing it.

Many social media users have been seriously panicking at the prospect of a Tom Hanks-less world, and have been expressing their dismay over his diagnosis.

Other users have been sharing their own personal stories about the actor.

It turns out that a lot of people have met Tom Hanks...

And, he has proven he is always the gentleman.

28. Someone got a Woody tattoo on their chest...

And showed Tom Hanks. I can't make this stuff up.

Of course, his response was just as great as you'd imagine...

Yep, celebrities drive cars too... But just look at how happy he is. It makes the heart warm.

Imagine how you'd feel when the realization hit...

This is one of the best things we've seen. Like ever.

24. Tom once wrote a beautiful letter to someone whose father had just died...

The actor is known for responding to fan mail using a typewriter but this really tops them all off.

23. Then there's the time he gatecrashed a wedding...

Well, this is something to tell the grandkids.

Of course he would be the one to stop. Would we expect anything less?

21. And Tom has never been a stranger to helping those in need.

Can you get any more wholesome?

20. This guy received a personal thank you letter from the actor.

He seems like he makes so much time for his fans.

19. This beautiful act of generosity.

Our hearts can't handle this.

18. We all know how Tom feels about discarded gloves...

The actor has an infamous obsession with lost gloves, and his Instagram is littered with photos of singular gloves in various locations. Clearly, he was wanting to save one for this woman here.

17. The time he called someone's girlfriend...

16. His kind, yet rather random, coffee machine donation.

Because who doesn't need some fancy coffee in their life?

This woman was clearly gushing over the actor and we can certainly see why.

He's never let his fame get to his head.

13. He is always making time for others.

This is so sweet.

12. The time he gave out free popcorn.

Free popcorn? From Tom Hanks? Count us in.

We wished you'd asked for a picture too...

10. He's such a supportive friend.

There's nothing better than someone who is always there supporting their loved ones, regardless of how hectic your schedule is.

9. "One of the nicest customers I had the pleasure to serve."

After all, manners cost nothing!

He clearly lives up to expectations.

Celebs can fangirl too you know!

6. Yet another act of generosity...

5. "One of the most genuine people I have ever met."

4. Spending time with his fans.

It's so refreshing to see a celebrity be interested in a fans' life in such a big way!

3. The time he walked into someone's guitar lesson...

We wish we could have been a fly on the wall for this.

2. Tom is massively into his charity work.

He's done so much charity work yet never brags about it.

Can you get any more heartwarming? No. No, you can't.