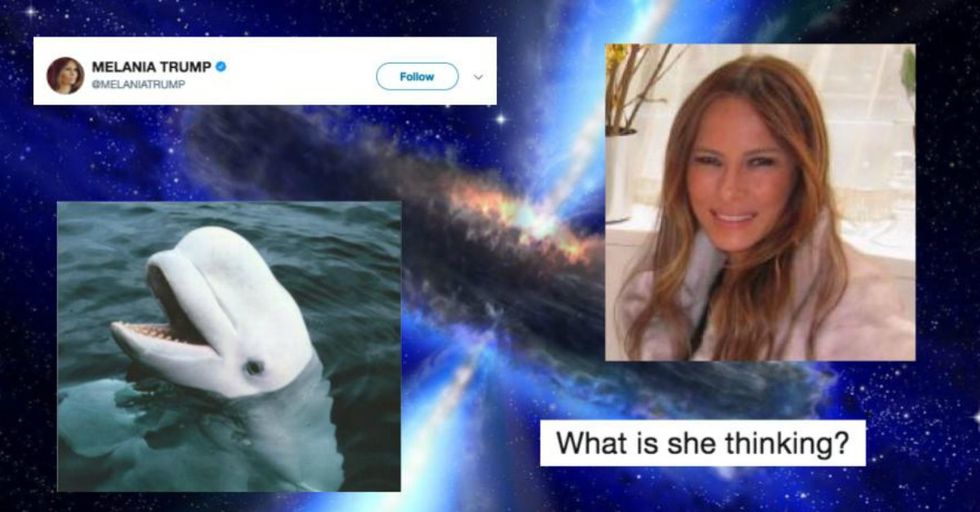 What is Melania Trump thinking?

This is a question a lot of us have surely wondered.

Literally no one else alive knows how it feels to grow up in communist Yugoslavia, become a model, move to the United States, reluctantly begin dating a notoriously rich ladies' man, and then somehow find themselves the first lady of the United States of America.

That's quite a trip. NO ONE ELSE knows what that's like. SNL made a sketch speculating about Melania's inner thoughts.

They joked that Donald iced her out so heavily that the only person she could confide in was a man working at a call center for misplaced deliveries. It's kind of heartwarming and kind of infuriating, but mostly sad.

Back in August of 2012, Melania tweeted a picture of a Beluga whale, this time leaving us speculating about the animal's thoughts.

She wrote, "What is she thinking?" What was Melania thinking in 2012? Why was she looking at this picture of a whale? Does Melania have an ardent love for animals that is suppressed by the toxic masculinity in her home?

Here's a picture of Melania wearing fur in 2012.

So, no, she probably didn't post that picture because she just loves animals. But hey, it's possible she likes the way they look and just doesn't care about their wellbeing. People are made of contradictions.

Even though she posted that tweet years ago, people are still replying.

David Wright responded on the five year anniversary of the tweet, reminding everyone that the question still had not received a formal response from Mrs. Beluga. What's the whale thinking about?

The answers range from casual to serious.

Just 18 hours ago, Twitter user @JamesABarcomb replied, thinking that Melania was repulsed by something the whale had just done instead of curious about the whale's inner monologue. But he wasn't the only one to respond...

"Climate change is real." Even belugas know that. Especially belugas know that our current use of fossil fuels is threatening life as we know it. But hey, let's get upset about Donald's made-up war on coal instead.

She's thinking that as a captive dolphin she has better access to health insurance than most Americans https://t.co/PzRdyx9kUu
— Funny Or Die (@Funny Or Die)1509062961.0

It's a whale, not a dolphin, but the argument behind this tweet is depressingly sound. We live in a time where Funny or Die and Jimmy Kimmel have more sane ideas about healthcare than the first family, y'all. What are they thinking?

Finally, some people thought that the beluga would ask the same of Melania.

Someone took the time to make this beluga whale Twitter account, just so that they could write this tweet about Melania and then mention it in their response to her years-old-tweet. Will we ever get the answer the age-old question? What are they thinking?