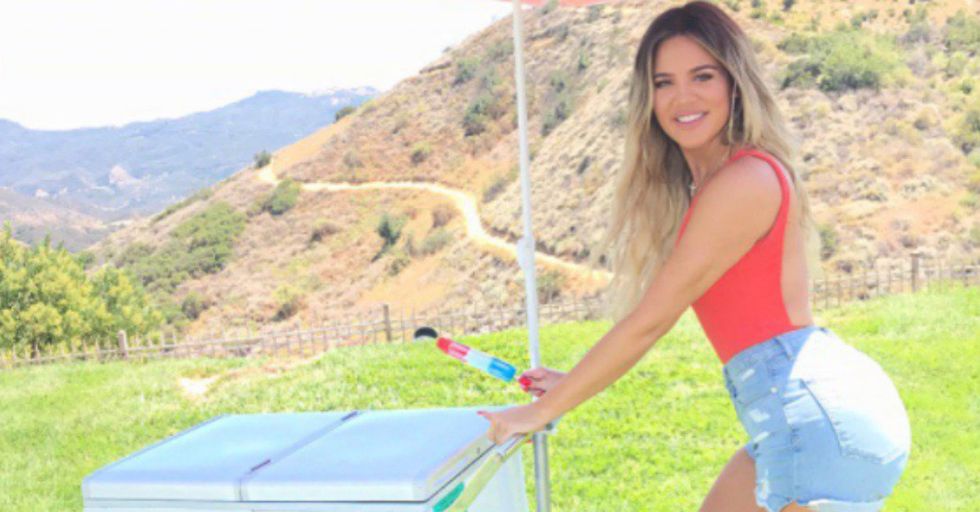 There's some serious s**t going down between Rob Kardashian and Blac Chyna.

But Khloe's recent tweet, sent out amidst the whole mess, seems to reveal that she's living in her own cloudless reality, a private little world full of rainbows and butterflies...and ice cream.

Either that or she's a brilliantly savvy distraction monger serving up tweet-sized smoke screens to pull focus from the disaster surrounding her brother. Either way, we love it.

The Internet went bonkers recently when Rob Kardashian had a bit of a breakdown on Instagram.

Over several posts, Kardashian accused Blac Chyna, the mother of his child, of cheating on him, making him spend exorbitant amounts of money on her, and using drugs in front of their kid. Several of the pictures he reportedly posted were graphic nude photos of Chyna. She allegedly clapped back at him with a Snapchat in which she claimed he physically abused her. The posts have since been deleted, Kardashian was suspended from Instagram, and according to a former federal prosecutor who spoke with BuzzFeed News, he could be facing charges of revenge porn. So what was Rob's sister Khloe doing while this tornado of trouble engulfed her sibling?

She was tweeting about ice cream!

We have three questions for Khloe: What? What?! and WHAT?! No wait, we have more questions: Are you really selling ice cream on the side of a hill? What's in the cooler? (Read this Se7en style while weeping for humanity) Did you know what you were doing? Did you?! Or were you actually just super craving that cold, sweet dairy treat at the same time Rob was having a meltdown (and not the good kind where you get soft-serve all over your hands)? We have to know, Khloe. We have to know.

Needless to say, other people were also upset and confused by this strange move.

I wouldn't go so far as to say, "Delete this," though. Because that ice cream tweet is Internet gold.

I would, however, wholeheartedly agree with this reaction GIF.

It's such a brilliantly baffling tweet. We have to hand it to Khloe. This tweet actually fits into a long line of moves made by the Kardashian family that, whether intentionally manipulative or not, are completely genius.

Some people were straight up not having it.

Counterpoint: What is Khloe supposed to do? Her brother is an adult man who made some bad choices, and ice cream is delicious.

Yes, Rob was "SPAZZING." All the more reason for Khloe to go post an innocent, blown-out Instagram-filtered photo complete with vanilla cone emoji.

Sure, it might have been a PR move orchestrated by Kris. But if that's true, that's incredible. After all, we're writing about this tweet right now!

Forget Stromboli. The Kardashians are master puppeteers. And yes, that was a Pinocchio reference.

So what was Khloe's next move? Did she make a statement about Rob? Did she apologize to her fans?

Nope! She tweeted about workouts you can do with a buddy. You know, for after you finish your ice cream.