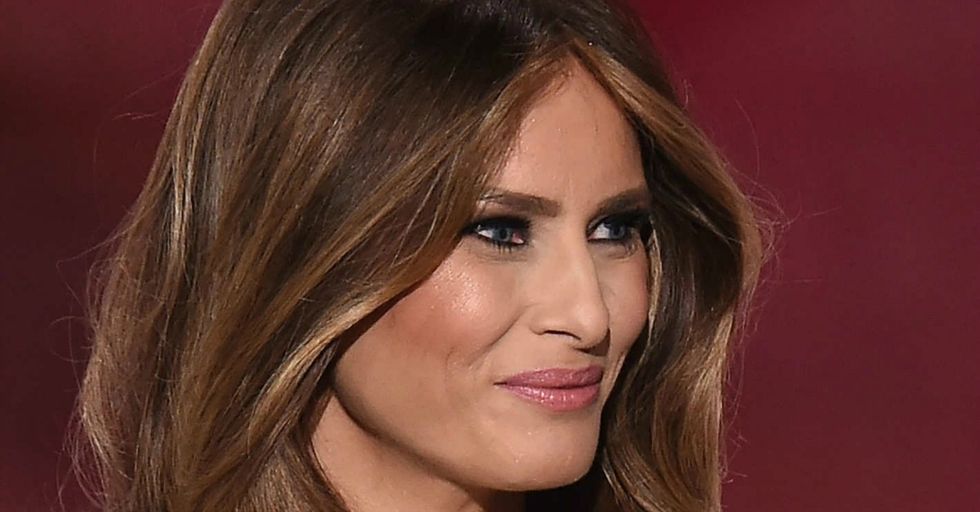 Much has been made of the fact that Melania Trump and her 10-year-old son, Barron, stayed in their Manhattan penthouse until he finished his school year at Columbia Grammar and Preparatory School.

It's kind of hard to blame her though...

Her face says it all. Blink twice if you need help, Melania.

Melania probably had no idea what she was getting into when she married Trump.

It's hard to feel too bad for her though. She can dry her tears with her 100 dollar bills.

But anyway, now that school is done, they're finally packing up and heading to D.C. to join that circus in person for the next three-and-a-half years.

Or however long as this presidency lasts...

But since the Internet can no longer rag on them for that, they needed something else.

It was very timely that her parents also traveled to Washington because it gave Twitter a whole new source of ammunition.

This is Melania's father, Victor Knavs.

Suit? Check. Red tie? Check. You can probably see where this is going...

Uh... Yeah. He bears more than a slight resemblance to someone very close to the First Lady...

We have to admit we're pretty creeped out by this.

The more you look, the worse it gets too.

It's like staring at the sun; don't look too long or you'll damage your eyes. (Or psyche.)

Someone had a pretty hilarious observation.

As gross as that thought is, it's pretty true. We can even see a little bit of Alex Jones in there.

He's also the same age as President Trump at a spry 70 years old.

In an interview with GQ, Melania compared the two, saying, “They’re both hardworking. They’re both very smart and very capable. They grew up in totally different environments, but they have the same values, they have the same tradition. I myself am similar to my husband. Do you understand what I mean? So is my dad; he is a family man, he has tradition, he was hardworking. So is my husband." The comparisons don't end there though...

Look at Knavs and his wife, who we assume is Melania's mother.

That's a pretty damn safe assumption when you see her too. It's like looking into some weird alternate reality where Donald Trump and Melania are the same age.

The resemblances are strong.

Way too strong, to be honest.

Even if there are some scientific reasons behind being subconsciously attracted to people who resemble your parents, this is a little much.

The Independent reports that, "In general, heterosexuals are more attracted to those who resemble their opposite-sex parent than their same-sex parent. What’s more, research has shown that it’s not merely appearance that matters: it’s also about your relationship with that parent."

Regardless, everyone seemed to agree it was pretty weird.

But even with this new comparison, you can bet they still won't lay off her for doing, well, just about anything.

Good luck with that, Melania.