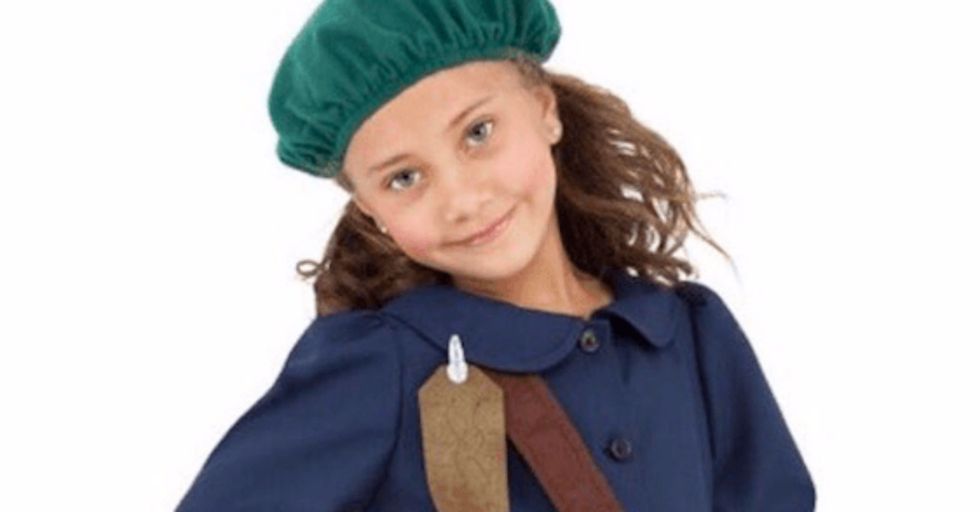 People Are VERY Upset About This Anne Frank Halloween Costume

It's almost Halloween, so you know what that means! It's only a matter of days until we see which famous people are racist cultural appropriators or otherwise offensive "jokesters."

Let's not forget when Julianne Hough donned blackface or Paul Hollywood thought it was a good idea to go as a Nazi officer, complete with a swastika armband.

What a magical s***show Halloween is! And now, one costume company is getting into the offensive kids' getup game with an Anne Frank outfit. A good rule of thumb for Halloween is to dress up as anything in the world that isn't related to Nazis or the Holocaust. There are a lot of things that don't have to do with the Holocaust. Pick one.

The shockingly insensitive description begins, "We can always learn from the struggles of history! Unfortunately, World War II shook the world in a way that no one could have foreseen. It showed us what true and mettle were. It also created some unexpected heroes, where even a young girl like Anne Frank with nothing but a diary and hope could become an inspiration to us all. We can learn from someone like that!" Unfortunately, Anne Frank can only be a girls' costume because she died in a Nazi concentration camp when she was about 13 years old. No number of weirdly-placed exclamation points will make your justification for this costume OK.

"What. The. Actual. Eff?" this Twitter user asked when she came across the Anne Frank Girls Costume in her search.

Any way you slice it, this costume isn't cool. Pumpkins. Penguins. Cats. Ghosts. Be anything for Halloween. Just don't be a Holocaust victim. Especially one that was a little girl.

Carlos Galindo-Elvira, the regional director for the Anti-Defamation League of Arizona responded to the costume with this succinct message:

@JerodMacEvoy There r better ways 2 commemorate Anne Frank. This is not one. We should not trivialize her memory as a costume.
— CarlosgeADL (@CarlosgeADL)1508113865.0

Indeed, there are much better ways to commemorate Anne Frank. Much more respectful ways to show your reverence for the hero she was. "This is not one" of them.

According to her, "it's clearly a British evacuee costume, not uncommon as part of our schooling actually." Still, HalloweenCostumes.com chose to sell it as specifically an Anne Frank costume. There's no getting around that.

Finally, someone reached out to Ross Walker Smith, a PR specialist for HalloweenCostumes.com, and he replied with this note:

"We sell costumes not only for Halloween, but for many uses outside of the Halloween season, such as school projects and plays." ...yeah, but your company's name is HalloweenCostumes.com, so that argument doesn't really fly. Since the backlash, the costume appears to have been removed from several sites that were selling it, so that's a step. Now go forth and please please please know that you don't have to be edgy or "politically incorrect" in order to get candy this Halloween. In fact, I'll give you a Snickers if you don't dress up at all.