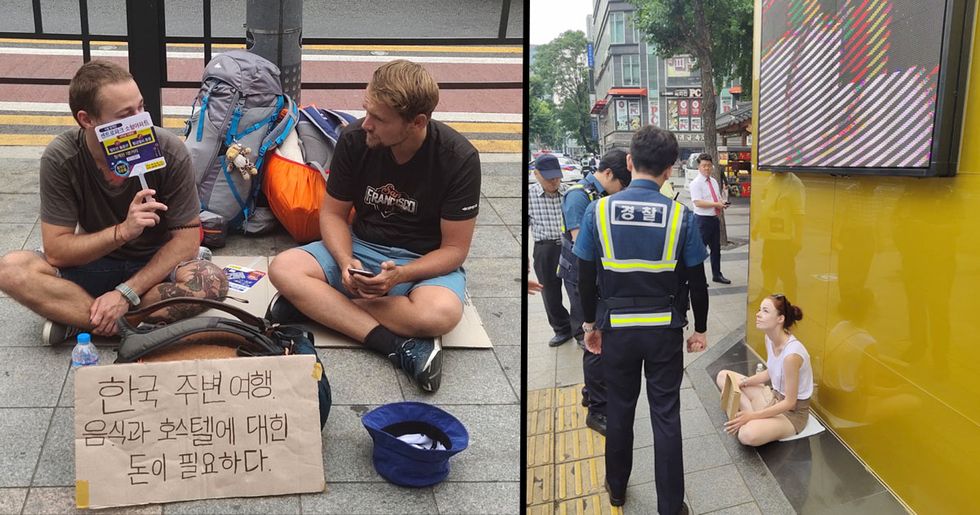 Traveling the world is one of life's greatest pleasures. There is nothing more satisfying than crossing into a new country, ready to breathe fresh air into your life. However, the privilege is only possible if you've got a bit of cash to spare. Often, people have to save for months in order to travel.

Not these people though.

They are literally begging for money from people in Asia and now the locals are sick and tired of it. Seeing primarily Europeans sitting in the streets, people on Twitter have clapped back at these "tourists," sending them a blunt message: If you're strapped for cash, stay home!

You would never believe the audacity of some of these people. Try to stay calm as we take you through some of the most shocking "begpacker" antics that we've ever heard.

People have taken to all social media platforms to express their rage and disgust at "begpackers."

We can't seem to fathom how these people have the audacity to beg for money, even in poor neighborhoods, all around Asia.

Thailand, Malaysia, and Korea have seen a rise in these kinds of people, who offer little to nothing, in exchange for money.

Authorities have had enough. Some countries such as Indonesia have employed extra immigration workers to send these idiots to their respective embassies so they can be sorted out. And apparently, the most common "begpackers" come from Australia, Russia, and the United Kingdom.

Ton (@TonsTweetings) posted these two photos when he saw a tourist sat in the streets of Thailand begging for money. The worst thing about this is the fact that she was sat right next to a woman who was collecting "junk" to re-sell so that she could make just enough to eat. Insensitive isn't even the word!

The oldest trick in the book. Seoul in South Korea has seen an increase in "begpackers" who are ultimately conning the locals there for their own selfish goals. Nice watch you've got on there, babe.

Here's another idiot sat in the streets of Seoul, strapped for cash because, apparently, he'd lost his money and all of his cards, too. Poor guy. Not. The police were called and they ushered him off.

This man is begging for money in a working-class neighborhood that had recently been struck by a typhoon. Yes. You read that right. This guy had the nerve to beg for money to fund his little travels in a poor and devastated town.

This just brings me back to one thing: Why are you traveling the whole continent without money? Why don't you just save up like the rest of us and then go on your little vacation?

There are even couples sat in the streets of Asia, begging for double the money to fund their travels. Shameless.

Some argue that, despite the fact that he was selling photographs for money, this man from Ukraine still falls under the bracket of a "begpacker," though he's one step up from the lot that we've seen so far.

Sorry, but if you think to offer hugs in exchange for hard-earned money from the locals in Asia, you're an idiot. @CHIMCHAMS95 captioned this: "White people who galavant throughout Asia [without] needing a visa and then beg for money on the street don't deserve rights." I agree.

This has clearly become a trend now. Jill (@jilli_bee) writes: "They literally would create such a gimmick of putting blindfolds and offer "free hugs" with a donation box asking for help to fund their travels. We can clearly see how privileged these guys are because a lot of Asian girls got so giddy about them to the point that one of them wept with joy while being bear-hugged by one of them."

The trend has already evolved. You can't get free hugs from white boys, you now have to pay. Wow.

This "begpacker" is asking for money for his travels right next to a grandfather who is picking up trash to make a living. Reports state that he was also there the week before with his little guitar.

"If you can actively decide to leave everything behind, take a backpack and wander the world, it is because you have a social structure that allows you to do it. You do it because most likely your family does not need your workforce to be sustained, you do it because even after months or years of travel, you can go back to a safe place were your "struggles" as a backpacker will only be a nice memory of the times when you decided to get out of your comfort zone and 'live'." Perfectly explained by Quique León (@elquiqueleon).

Do you know how we all achieve our dreams? By working hard. Not living off the backs of Asian locals in order to live a luxurious life. Pretty simple, if you ask me.

"Begpacker," a page on Facebook, is dedicated to exposing frauds like this. It warns to not believe these manipulative tourists. Do you need a ticket home? Work a job until you can afford one!

One person commented saying: "at least he had the basic decency to translate the sign." That doesn't earn him any more brownie points in my books.

If you're thinking about going traveling around Asia, or any part of the world, make sure you have one thing...

And if you want to read more about traveling, then keep scrolling...