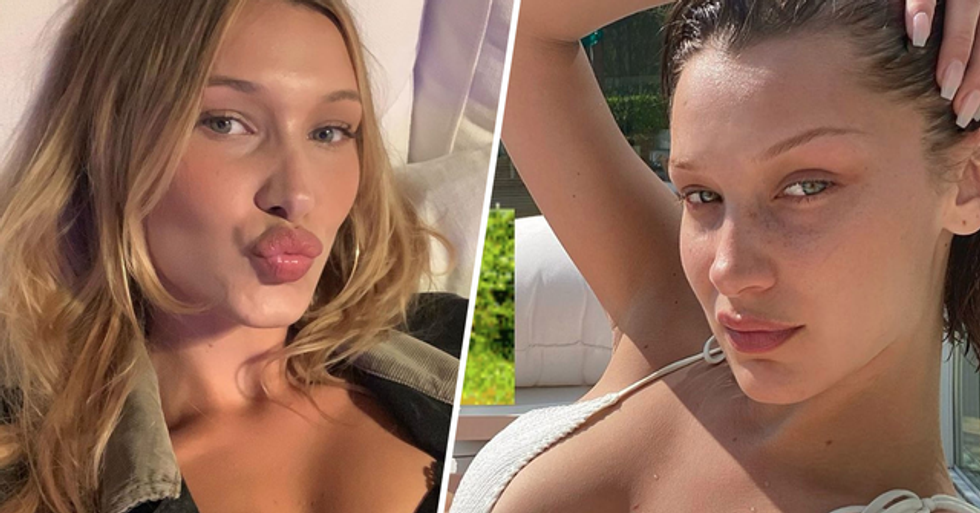 Supermodel, Bella Hadid, has been spectacularly roasted online after she apparently attempted to photoshop one of her selfies... With very little success, obviously.

Keep scrolling to hear what people had to say about the blunder, and to see the selfie for yourself...

Unless you've been living under a rock, you'll know who Bella Hadid is.

Part of the infamous Hadid clan, the supermodel began posing for the camera as a child along with sister, Gigi.

Yolanda Hadid and her daughters make for a pretty iconic trio...

And, though Gigi was initially the most popular out of the siblings, Bella has been gaining popularity significantly in the last couple of years.

The twenty-three-year-old fashion mogul has skyrocketed in the modeling ranks.

And she's now up there with the elite in the industry.

Including Alexandre Vaulthier, Fendi, and Maison Margiela which, writing on her Instagram, she dubbed as "a dream come true."

It could also help that she has a pretty A-list set of friends.

The model is incredibly close to KUWTK star and fellow model, Kendal Jenner. Speaking to Testino, Jenner explained: "Bella and I were actually really good friends since high school, and hung out every day in school before either of us started working. "It’s just funny because a lot of people don’t know that Bella and I have been friends for like 5 or 6 years."

The pair are always turning heads.

Last year, a video surfaced of Bella kissing her bestie, which was captioned by Jenner with, "happy birthday sexy."

The clip, posted to Jenner's Instagram story, stirred a lot of attention.

Because it wasn't just a peck, it was a proper kiss. And Kendall can be seen straddling her fellow supermodel bestie. It's an Instagram recipe for disaster, isn't it?

Because the video was only shared to Instagram Stories, it wasn't saved permanently on the model's profile.

But, as Instagram users always do, someone hastily saved the video and posted it online.

But, even without her best friend by her side...

Bella generates a lot of fuss and attention.

The supermodel is simply stunning, and she receives a lot of clamor and praise for her unusual, yet beautiful appearance.

And each of her Instagram selfies rake in at least a million likes... Not that we're counting.

But, with all this attention comes a tremendous amount of pressure.

It can't be easy having millions of people scrutinizing your every selfie... Hell, even I get stressed posting a selfie to my measly 300-strong Instagram following.

So these supermodels may be forgiven for slightly tweaking their Instagram snaps...

A tiny bit of photoshopping never killed anyone, right?

Well, Bella was recently caught out photoshopping one of her casual sunbathing selfies...

And has been spectacularly roasted for making a huge, and rather embarrassing, photoshop blunder.

People have been taking to Twitter to point out the model's editing hiccup.

Bella has apparently attempted to edit more plants into her back garden...

But had accidentally matted them over her lounging chair instead. Oops. It's lucky that she's pretty though, right?

Because people seem too distracted by her good looks to even notice.

Oh, to be that beautiful...

Though some people had other theories...

Who are you trying to hide, Bella?!

You can see Bella's photoshop fail for yourself here. But, if you're more interested in that Kendal Jenner kiss, you can read more about it below...