Sweet Moments of People Being Kind to One Another | 22 Words 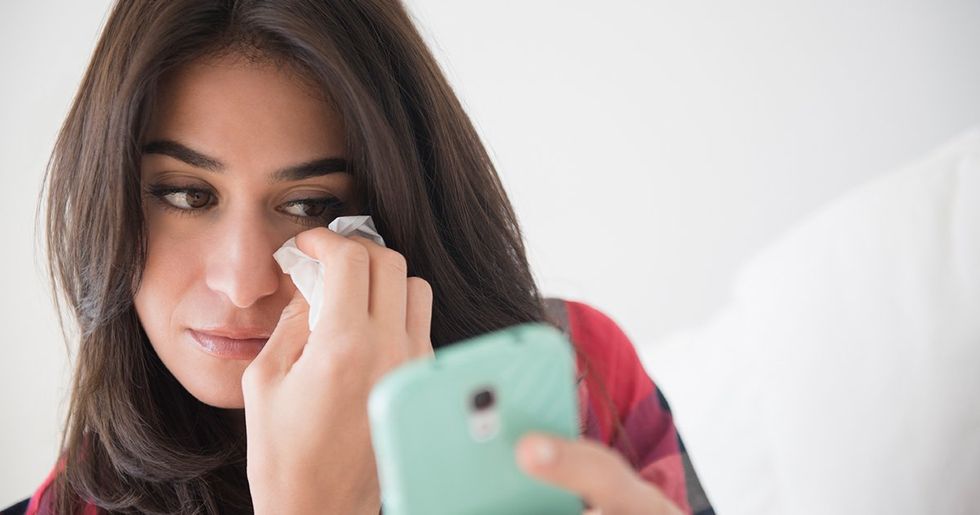 Sweet Moments of People Being Kind to One Another

I know the internet gets a lot of (well-deserved) negative press, but remember, the internet's just a massive collection of people, and a lot of people — maybe even more than you'd think — are good. And I'm not just talking about "I don't create egg accounts on Twitter to spew hate at people" kind of goodness. I'm talking about the legitimately good, "I'm going to go out of my way to perform a random act of kindness without even a hint of an ulterior motive" kind of goodness.

The subreddit /r/HumansBeingBros collects a bunch of humans being, well, bros — helping out people they come across for no other reason than the realization that it's the right thing to do.

So check out these photos of kindness encapsulated; pictures that will make you feel so good deep down in your bones that you might actually let yourself start to believe people are inherently good again.

Hopefully the manager comp'd their meal.

My wife and I couldn’t get our newborn baby to stop crying at the restaurant, so we embarrassingly started to pack up to go home when the couple sitting next to us offered to hold him so we could enjoy a night out. Our baby slept on this kind stranger's shoulder the entire evening! - humansof

Look out for the next guy.

In Norway you get a small amount of money for recycling bottles/cans. They're often collected by poor people, homeless, etc. A lot of our trash cans has these holders around them so people don't have to search through the trash to collect them. - idunnomysex

Another text thread, this time between a recently-unemployed person and their dog-walker: RECENTLY UNEMPLOYED GUY: I unfortunately just found out I was laid off from my job today. So after today we would like to cancel Calli's walks for the upcoming future until I land a new gig. DOG WALKER: Oh no!! I'm sorry to hear that. Calli always has a spot with us. RECENTLY UNEMPLOYED GUY: Thanks so much. DOG WALKER: Do you mind if we take Calli out the rest of the week? Free of course, and while you're job hunting if we have room we'd love to have her out too. We have to come there anyway and we love Calli! - bigmouthstrikesaga1n

Should old acquaintance be forgot? Yes.

I came out to my very religious family a few years back and haven’t been allowed home since. I just got this text from one of my professors: "Hi Flynn! It's professor Jones. I was informed by a few sources you don't have anywhere to be for the holidays, so I'd like to invite you to our family's New Years party! Please let me know if you can attend, we'd love to have you!" - snooppii

Some dogs are both smelly and lovable.

Nobody wanted to go near her because of the smell, but this woman didn't care. Since then, she follows and waits outside her place everyday until she decides she needs to do something. - vosszaa

Good people will show up.

What a blood donation center looks like in El Paso after police said there was an urgent need for blood. - xman1314

This one act made three people better.

Was watching the Michigan game at Roosters today when I noticed this man was looking for a seat to watch the game. There were none available so I told him he could sit with me and my son. After introducing ourselves, we ended up having a great conversation about his life. He is a vet with the Navy that served our country in the Vietnam war, said he is the only one left from his immediate family besides his sister and they all live in Alabama. Turned out he just came up to Roosters because he felt lonely and wanted someone to watch the game with. It was pretty cool to have this experience today, even cooler for my son to see how an act of kindness can impact people. - TrevBales

But do they come with all the accessories?

I put some action figures on eBay, a mom bought two but not the other 28 I had. She messaged to say her autistic son was excited to get them. She wished she could have bought more. I sent her all 30 of them, got a phone call, she thanked me and cried. We're all friends to this day. - gangbangkang

Wrapping the present is the funnest part.

I was the poor kid growing up. My mom used to send me to birthday parties with no present, just so I could eat. I definitely got to a point where I understood and was embarrassed as hell. In fifth grade, my friend's mom invited me to sleep over the night before the actual birthday party. When her daughter was in the shower, the mom laid out the toys she had bought her daughter for her birthday. She let me pick one to wrap and put my name on. I'm 37 now. I am still grateful to that mom. - jackzilla1123

Now she can go crusin.'

A text exchange after Person B listed their car for sale: PERSON A: I know you are asking $1200 and that seems like a good price. Would you be willing to hold it until next week? PERSON A: I really need a car but I have to wait until my taxes come. PERSON B: Sorry, I already told someone I wouldn't hold it. PERSON A: That's fine. I've had a hard time finding something reliable in my price range. I'm borrowing my mom's car now, but it's tough to get me and her to work and my kids to preschool but we're making it work. Hopefully I'll get my taxes back next week, PERSON B: No prob. I actually just want the car to go to someone who needs it. If you need it, you can have it. PERSON A: Thanks so much! I'll let you know as soon as the direct deposits come through. PERSON A: So excited! PERSON B: No, I mean do you want the car for free? I actually wanted to make sure whoever got it actually needed it, so I didn't list it as free, because everyone would have "needed" it, but probably just resold it. PERSON A: What?? Are you serious? You don't have to do that, the price is fine. PERSON B: No, seriously. I want to give it to someone who needs it, and you seem to genuinely need it. It's yours. No money needed. - JeffTrav

You can even be considerate at concerts.

Daughter signs for her hearing impaired father at a rock concert so that he can enjoy the music too. - commonvanilla

And the beat goes on.

A year ago my little sister left this world. This weekend her heart recipient met my mom and shared her heart beat. - Necoya

I'm at the mall and a little boy comes into Champs asking if they have any basketball shoes under $75. The worker said no and the little boy's face DROPS. I ask the boy his name and what he needs the shoes for. Turns out he's on a basketball team and is dying for new shoes so I told him if he sends me a picture of him at his game I'll buy him whatever he wants. His dad damn near breaks down. YOU ARE VERY WELCOME JORDAN, ENJOY YOUR NEW LEBRONS AND GOOD LUCK. - prettypettypeople

Firefighters climbing 110 stories in full gear in remembrance of the first responders who died on 9/11. - Cup-of-Noodle

Hope these guys are around when I get a flat.

I got a flat, and although my boyfriend was on the phone trying to help, I was struggling to loosen the lug nuts. Then these guys came up. They spoke limited English but gestured toward the tire. They put my spare on and I was back on the road in no time. I thanked them and tried to offer them money to no avail. - kdbice

Sitting in my car in front of the post office because they're closed for lunch. This woman tried to get in, I told her they were closed. She started chatting, and I jokingly said "hop in, let's go for a spin to kill the 10 minute wait." She did. Friends, meet Beverly. - 5or3n

My quick math says that comes out to... a lot of money.

Florida man bought over 100 generators, around $450 apiece, to send to the Bahamas after Hurricane Dorian. - chuckchicken11

During his wedding photoshoot a groom saves a boy from drowning. - hootersbutwithcats

Because of the 1968 Girl Scouts, we can all breathe.

You gonna finish that?

There's a channel on YouTube called Grandpa Kitchen and it's a happy old man cooking giant meals that he then shares with a bunch of kids. It funds a bunch of food and literacy programs too. - Baldberd

About as heroic as it gets.

This is Anthony Borges. He saved the lives of 20 of his Parkland classmates by using his body to keep the shooter from coming in to kill them. In the process, he was shot five times. - greek_stallion

Please teach them how to tie ties too. It is very difficult.

A teacher at an elementary school in South Carolina wanted to help little boys with no dad at home so he started a "Gentleman's Club" where these little guys dress up and learn to shake hands, make eye contact, etc. He even has extra jackets and ties for boys who can't afford them. - MrWp

Thankfully, the note was found by a rowing coach.

This note was left on the gate at the water this afternoon. No name or number left but whoever you are, rest assured your rose is in place in the middle of the lake. - jossfun

My guy Ice Cube is expanding his mind.

I accidentally left my favorite doll Ice Cube the Penguin at my sister’s college after I stayed with her for the weekend. She decided to take the opportunity to pictures of her and Ice Cube doing college stuff together, such as this! - Galaxena7

That's enough cookies to get you through an entire re-watch of The Sopranos.

This man purchased seven packs of cookies. Gave the girls 40 dollars and told them to keep the change. Then he came back to the table and said "pack up all your cookies. I'm taking them all so y'all can get out of this cold." $540 he spent on cookies. - HourlyAlbert

My sister is in Egypt for work and had no mates to see the pyramids with so she took her Uber driver instead. - FearmyBeard21

When William Kamkwamba was 15, he built a windmill out of scrap and bicycle parts that provided power to his farm in Malawi. He then built a solar-powered water pump that provided drinking water to his village. - herdcollege

This guy's a real snikt.

Hugh Jackman bringing his absolute best to his fan. - fancyfruit

Bonus dogs are the best dogs.

All I said was "the usual, two corn dogs and a small drink." She said “I threw in a another one just for ya." All right, thanks Arthina. - AGF2098

He can do what every other kid can do.