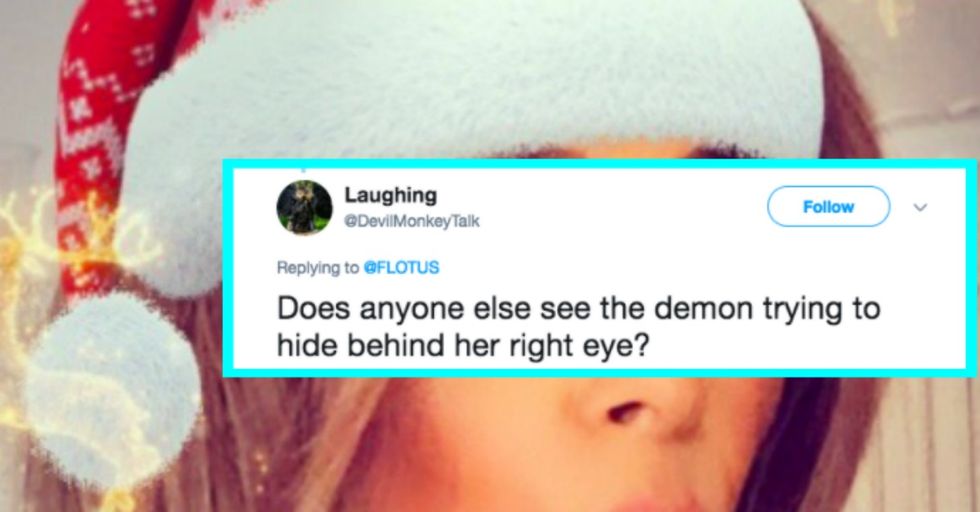 Let us count the ways in which the Trump family has ruined Christmas this year, pa rum pum pum pum.

No wait, there are too many — let us sum up (shout out to Inigo Montoya for the idea). First, no one came to the tree lighting ceremony. Later, after they messed up a whole bunch of other stuff, Christmas in Jesus' actual hometown was canceled because of something Trump said. And yet, Donald has purported over and over that he is the one who has saved Christmas.

Now Christmas is over, but people cannot seem to stop talking about how the Trumps handled it. Specifically, people are interested in the Snapchat selfie that Melania posted on Twitter on Christmas Day. There are so many questions and very few answers. It's clear that Melania Trump tried really hard to make it seem like she was enjoying the Christmas holiday. Did she succeed? Only you can be the judge.

From Inauguration Day, it was clear that Melania Trump was less than thrilled with her position as the first lady.

It also seemed like she simply wasn't too keen on being married to Donald Trump. And frankly, we can't blame her.

Vanity Fair even published an article about how much Melania hates her job.

In the article, sources said that Melania didn't want this first lady job "come hell or high water." Melania's spokeswoman was quick to deny this claim, but the evidence is just too clear.

In nearly every photograph of her taken while she's first lady, Melania looks...

...Well, she looks like the rest of the world. Like all of us. Like her world is constantly crumbling down around her and she's paralyzed with fear.

The shadowy cold branches, the soulless twirling ballerinas, it was all like a scene out of Disney's Fantasia, and not like a fun one like the ostriches and the hippos eating food. It's like one of the scary ones like the one with the giant winged demon thing with fire eyes.

The Vanity Fair article and the swirling rumors of Melania's distaste for the first ladyship prompted Donald Trump himself to tweet out a desperate plea for us to believe that Melania enjoys her life:

And while that tweet did nothing and it is still monumentally clear to us all that Melania Trump longs to escape her predicament, she tried so hard to show us she was having fun when she posted her very own Christmas selfie on Twitter...

The #MerryChristmas hashtag and the on-theme emojis were a nice touch. They almost made it seem as if she was having a good time.

Obviously, Twitter had a lot of strong reactions to Melania's selfie.

Perhaps unsurprisingly, none of them were, "Wow girl, you've totally convinced us you love your job!"

Some took Melania's Christmas selfie as an opportunity to provide critical feedback to the first lady...

Although we doubt that Melania (or any person or thing that has ever lived) could convince Donald Trump to do something he doesn't want to do, it's a noble effort.

Others may have looked a little too deeply into the photo...

We're pretty sure that phenomenon is called "contact lenses," but it's a nice try. We wouldn't put it past Donald Trump to make a deal with the devil and for that devil to possess his wife and oh god we believe this person now.

Perhaps our favorite response came in the form of another altered photo:

Treason's Greetings to the whole Trump family! With any luck, they'll all be in jail in 2018 and Melania will finally get her wish to be alone with her thoughts and her piles of diamonds. Here's hoping.