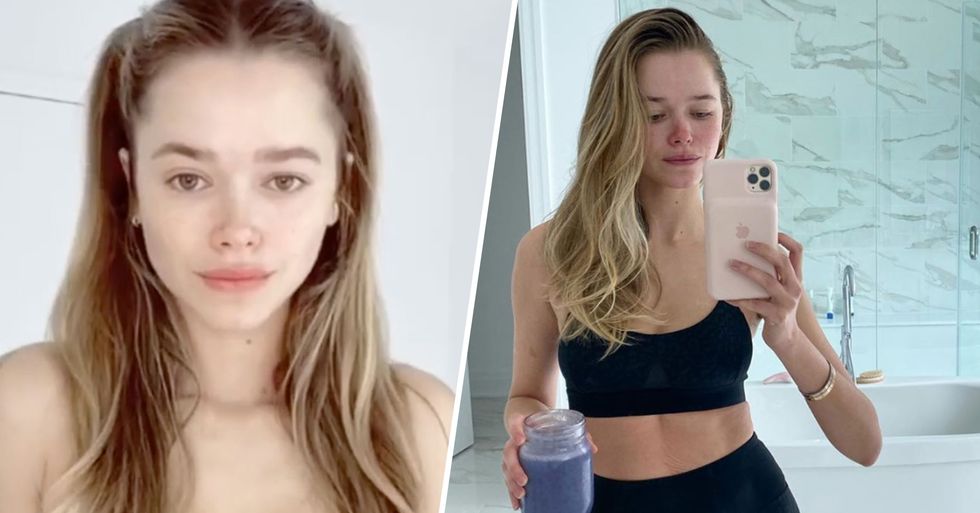 For many women, trying to live up to societal beauty standards is just not realistic. This toxic social norm means women are in a constant battle to appear perfectly polished at all times.

That means one thing... you are not allowed to age!

However, one mom from Russia seems to have cracked the code, and she's willing to give all her secrets away... you won't believe how old she really is.

But one mom from Russia seems to have conquered the aging process altogether.

Sending the internet into a frenzy when they found out how old she actually is...

This is Valeria Lipovetsky.

It's not difficult to see why people are so shocked to learn she's a mom of three, but that's not the only shocking revelation.

These are her sons...

Which most people confuse for her brothers!

Valeria is constantly being mistaken for a teenager by her fans.

Which for most women is the ultimate compliment, I mean who doesn't get a little buzz when someone asks for your I.D?

The Russian model seems to have the world at her feet.

Not only has she done a complete 180 when it comes to aging, which is a miracle in itself with three young sons, aged 7, 5, and eighteen months!

But she is now living the dream with her husband in Canada...

Fans just can't wrap their head around her recent reveal.

The model has finally shared her own elixir of life with fans.

While genetics have to play a huge part, it's got to be worth a try...

As well as dowsing herself in cold water after her shower, Valeria revealed in a series of videos her rather extensive skincare regime, which she swears by.

Routine is so important, especially when you're stuck at home all day.

Straight after getting out of bed, she applies a Vitimin C serum to her face, which she says helps give her a bit of a glow. Although, it doesn't look like she needs it.

Everyone needs a little trick to help banish that cellulite...

The mom uses a dry-brushing technique, which not only helps to exfoliate the skin but aids circulation and helps with digestion. And apparently helps get rid of her cellulite... What cellulite?

This is the cherry on a very well preserved cake...

Valeria then uses retinol, an anti-aging ingredient in creams that she swears by.

It doesn't stop there...

She also uses Rose Quartz gua sha stone on her face to help with her circulation, which she has shared a video on how to use correctly.

The influencer has gained a massive following by sharing videos giving advice on beauty tips.

But it was when she came clean about her age that boosted her popularity massively, many of her fans just couldn't believe how old she actually was.

When she revealed she was actually a fully-grown-adult, her social media blew up.

She was flooded with comments, one person commented: "I mean seriously is there even any human being out there who didn't think that you are their sister as first impression!?"

We just couldn't believe it...

A second stunned fan wrote: "Saw your TikToks and then started following you on Instagram and almost fell when I read they were your kids. I swore you were a teenager. I hope that isn't offensive because it shouldn't be. Sooooooo lucky!!!! So beautiful."

But how old is she?

The youthful-looking mom is, in fact, thirty years young! And with people saying she looks "fourteen" that is a pretty amazing compliment. One mom that just can't get to grips with aging gracefully, has done the craziest thing with her daughter. Keep scrolling for some controversial content... How could anyone do that with their mom!