"I believe deep down that God put me on this journey for a reason." | 22 Words 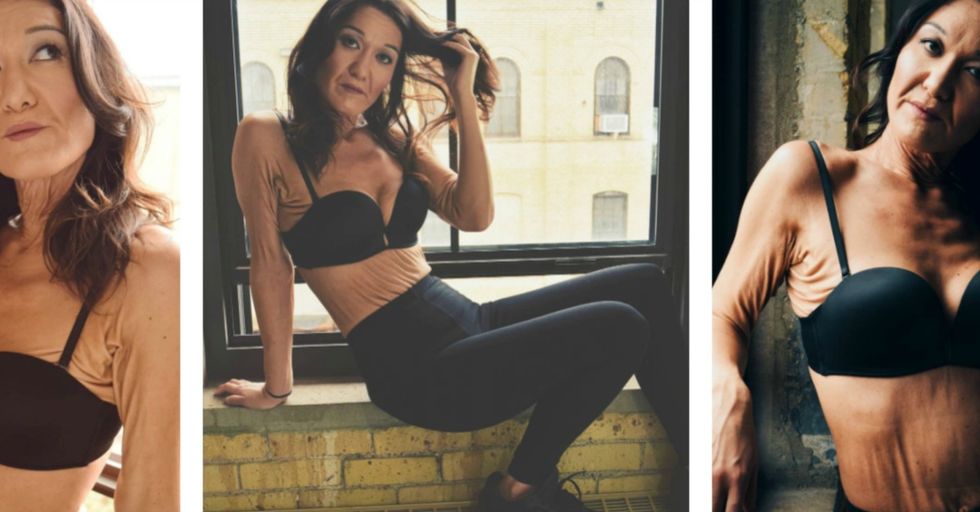 Learning to love yourself and your looks is rarely a walk in the park.

Some, though, fight trickier body-positivity battles that others on the quest toward conquering self-love. Model Sara Geurts, for one, has spent years learning to feel comfortable and confident in her own skin.

Mostly because her skin is, well, a bit different...

26-year-old model Sara Geurts is quickly becoming the fashion world's new body-positive hero. Mostly because she does not look like your "average" 26-year-old.

Geurts suffers from a rare form of Ehlers-Danlos syndrome. Among other symptoms, the disorder has caused her skin to prematurely lose its elasticity. She was diagnosed at age ten, but started noticing her skin sag around age seven.

For years, Geurts obsessed over ways to hide her saggy skin.

When she didn't hide it well and people noticed, they often just thought she had endured some sort of huge weight fluctuation. Any way she sliced it, Geurts felt totally insecure amidst peoples' constant confusion and scrutiny.

Before long, Geurt's insecurities started creeping into other areas of her life. Relationship-y areas.

By age 23, a relationship she'd been exploring fizzled. She credited the break-up to her resistance toward conquering her shame. She had to find a way to love her body.

Little did she know that break-up would change her life forever.

As Geurts detailed in her personal essay on The Mighty, post-break-up self reflection taught her one of the most important lessons she'd ever learn. She didn't have any confidence. And confidence? That's the key.

She wrote, "I promised myself from then on I was going to be true to myself, love my body, love my disorder and most importantly, love myself."

But how? That's when Geurts discovered photography and modeling. "After acknowledging the parts of myself I hated and shunned," she wrote, "my mentality slowly began to change, and the beauty within my flaws slowly began to appear. Not only did I recognize change within myself, but I started to think more and more about photography and art. How could I use my story and revelation to help others?" Turns out, by telling it. Geurts finally summoned the courage to submit her story to The Love Your Lines Campaign and the campaign decided to publish her. That day she finally bore her soul to the world on their social media page will be forever etched in her psyche!

Since that moment, Geurts has been baring her skin on social media and attracting quite a following.

Over 11,000 Instagram followers later, Geurts is a bonafide body-positive social media star! So what's next? This model is doing all she can to become the face of EDS. She wants that spotlight in order to not only help others better understand the disorder itself, but to also pave the way for models with disorders in general to break into the regular everyday commercial circuit!

"My goal is to shed light on the unhealthy mindsets we currently have within the fashion and modeling industry today."

"I believe the scars and discrepancies we have are reminders to the world of what we have been through as individuals. We should not be urged to 'cover them up' or 'remove them' but instead glorify them!" Here, here!

"Each line holds beauty," she wrote, "and is beautiful in its own way. No one else carries the exact lines I have, and this is what I consider to be truly beautiful." With each pose, each photo, Geurts further shatters the cultural stigmas keeping so many unconventionally-beautiful people trapped in a constant state of shame.

Each of us is born beautiful, and this body image warrior isn't backing down until society's vision of beauty reflects that truth.

And with boss confidence like that? We know she can do it! By sharing her photos and her story, Geurts inspires countless other people just like her to see themselves in a whole new, positive way. Who wouldn't want to sign this girl? Her newfound self-love is utterly radiant.

"I believe deep down that God put me on this journey for a reason."

"I will not stop until my voice and the voices of the EDS community are heard, and I will continue in my efforts to change society’s visions of perfection within our fashion industries in the U.S. and around the world." "Wear your stripes with pride, my loves. Our community may be small, but we are all here to support one another." Preach, girl. Preach!