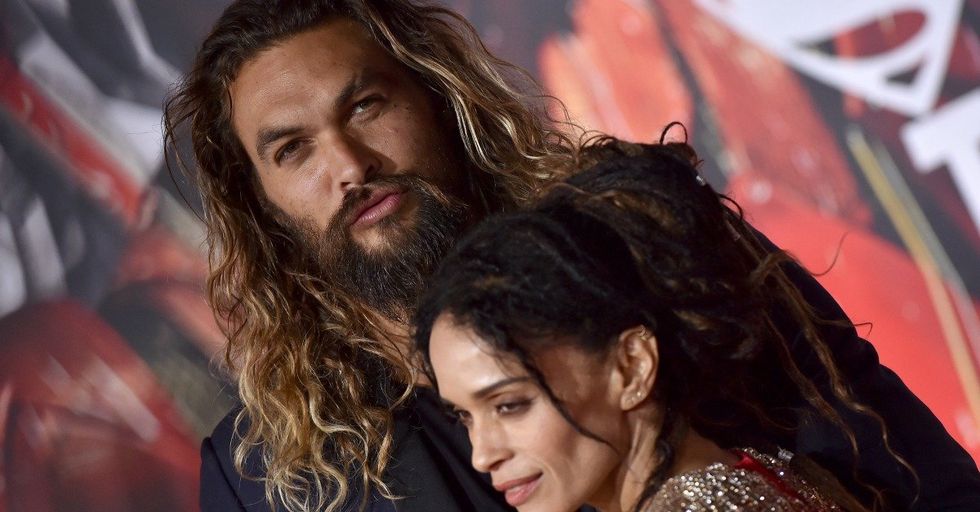 But did you know Momoa has loved Lisa Bonet for much, much longer?

Jason Momoa has been having a banner year.

The world finally got to see him as Aquaman, the trident-carrying superhero of The Justice League. He also secretly tied the knot to longtime girlfriend, Lisa Bonet.

There were a couple of bumps in the road, however...

A video of him making rape jokes at ComicCon surfaced earlier this year. In an interview, the actor said that one of the great things about the sci-fi fantasy genre is being able to "rip someone's throat out... and rape beautiful women."

If there's one thing all the scandals involving the Weinsteins and Tobacks and Spaceys and Moores and Trumps, etc, have taught us, it's that seemingly innocuous things like jokes or rumors can have darker underpinnings.

Ever since he played Khal Drogo on Game Of Thrones, Momoa has become a verified heartthrob, although he's had literally years of sexiness.

But for all those ladies interested in Momoa, his heart has been taken almost his entire life.. by Lisa Bonet.

Momoa recently sat down with James Corden on The Late Late Show and spoke about when he first saw Lisa Bonet. “I was 8-years-old and I saw her on the TV and I was like, ‘Mommy, I want that one,’" he said to Corden.

He then went into greater detail about his desire for Bonet.

“I was like, ‘I’m going to stalk you for the rest of my life, and I’m going to get you.’ I’m a full-fledged stalker." Maybe not the most appropriate thing to say, you know, considering the previous rape comments and it being 2017 and all...

Also, here's the thing, stalking – literally not a joke.

Years ago Jason Mamoa said he enjoyed his 'Game of Thrones' role because he got to 'rape beautiful women'. Recently… https://t.co/2dDL89MqON
— YellowGlassDragon (@YellowGlassDragon)1510897462.0

According to victimsofcrime.org, "Stalking is a pattern of behavior that makes you feel afraid, nervous, harassed, or in danger. It is when someone repeatedly contacts you, follows you, sends you things, talks to you when you don’t want them to, or threatens you."

In fact, Corden says as much during the interview.

"It's never a great in with the ladies – I've been stalking you," the talk show host said with a nervous laugh.

What Momoa was actually describing (very poorly) during the interview was his infatuation for Bonet.

He nearly jumps out his chair and giggles as he describes his giddiness when they first met. "I literally turn around, I’m with my best friend, and I see her and she goes, ‘Hi, I’m Lisa.’ And I turn around to my friend and I’m like, ‘Ahhh!!! F**king fireworks going off inside me."

Lisa further won his heart – which, again, she'd already had for years – when they went out later that night.

Momoa, of course, didn't tell Bonet of his infatuation at first.

"I didn’t tell her that until we had two babies otherwise it would have been creepy and weird. I’ve always wanted to meet her. She was the queen always." Aww...