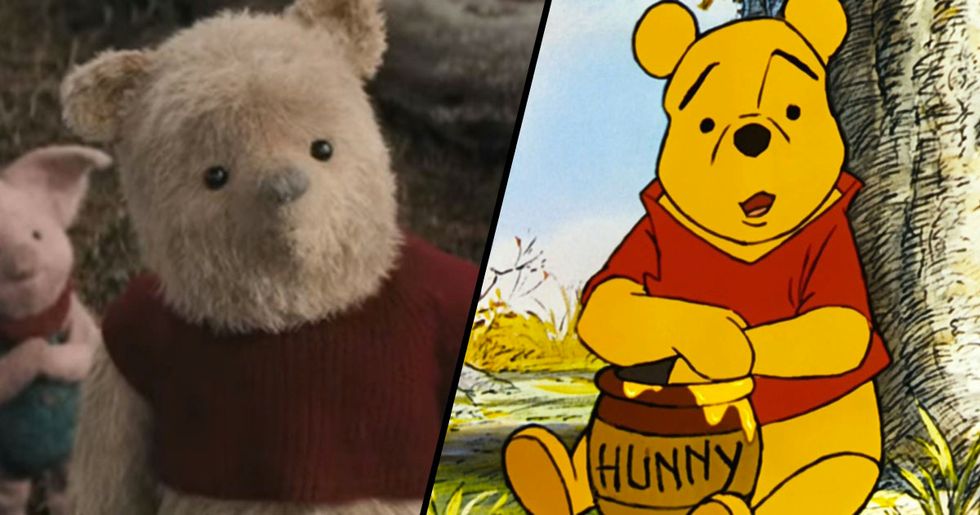 Right - I'm going to be honest here - I always thought of Winnie the Pooh, universally loved ursine creation of A.A. Milne, as a boy. And it was an obvious assumption to make; in the 90s cartoons that documented the lives of the inhabitants of the Hundred Acre Wood, Pooh was always voiced by a Jim Cummings - who voices various cartoon characters from Rat Capone to Humphrey the Bear, and is (don't hold your breath) a man.

However, in a recent book titled Finding Winnie, author Lindsay Mattick uncovers the true identity of everyone's favourite cartoon bear (suck it, Paddington!). Turns out Winnie the Pooh takes his name from a female bear brought over from Canada to London Zoo after World War One. The story of the original Winnie is fascinating.

Everyone loves Winnie the Pooh. Since his creation in 1926, everyone's favourite Pooh-Bear has firmly planted his honey-jar flag in the earth. He is beloved and recognised by all manner of people all over the world...

Here's Winnie receiving a star on the Hollywood 'Walk of Fame'.

Winnie received his star back in 2002.

Winnie was personally invited by The Palace in 2006.

Here's an original illustration of Winnie on sale at Sotheby's.

Some illustrations from that sale went for over £400,000.

Here's a Japanese free-skating fan throwing Winnie into the air in celebration.

And a sinister Daffy Duck under the barrel...

So have all these people around the world been getting Winnie wrong this whole time? A new book seems to say so... in a way...

The story is explained in a book called Finding Winnie, by Lindsay Mattick. The book is available on Amazon.

Apparently it all started with the First World War.

The story begins when a Canadian soldier called Harry Colebourn bought a bear cub for $20 from a trapper on his way to war, and called it Winnie.

Colebourn, having bonded with the bear cub, took her with him on the long trip across the Atlantic to Belgium where he was to be stationed.

But soon, Colebourn was called upon to move up to the front lines and could no longer look after the little bear.

So, Colebourn decided to sell Winnie to London Zoo, who raised Winnie in captivity.

And it was at London Zoo that she met...

At London Zoo, Winnie was visited by writer A.A. Milne and his young son... Christopher Robin - who subsequently named his favourite teddy after the bear.

Almost a century later and Winnie is household name all over the world. And an estate valued by Forbes at 3 - 6 billion dollars... that's a lot of honey.

Here's a picture of an old Christopher Robin Milne, immortalising little Winnie as a statue at London Zoo.

So Winnie's a girl then?

Biologically, yes, the gender of the bear found by Colbourn was indeed female.

The signs were there.

Of course, there were signs that Winnie was actually a girl, which we all seemed to have missed.

Winnie does tend to skip about the Hundred Acre Wood dressed only in a crop top... just saying...

Winnie does tend to be a girl's name - short for Winnifred, like Winnie Mandela or Winnie Harlow.

In the case of our favourite Pooh-Bear, 'Winnie' is actually short for Winnipeg, because that's the area in which Colbourn bought the bear.

But it's no big deal, right?

So Winnie's a girl, it's not a big deal though right? It's a cartoon, you can ascribe whatever you want to it. No one actually cares do they?

Wrong! So wrong! People are really upset about this. Taking to Facebook to disavow Mattick's revelation.

Here's the main argument, that Pooh is described with a masculine pronoun in the book and no one can change that now.

This is the last straw! I'm sick of the marxist radical left taking everything I loved as a child and defiling it with new gender norms! I give up!

Goes to show how wide-reaching a debate about a cartoon animal can be.

At least one of us seems to have the right idea about this whole thing.

What to take away from this.

Honestly, not that much. It's just an interesting story, I don't think you have to look at Pooh any different than you already did. Although I wonder who'll be next?