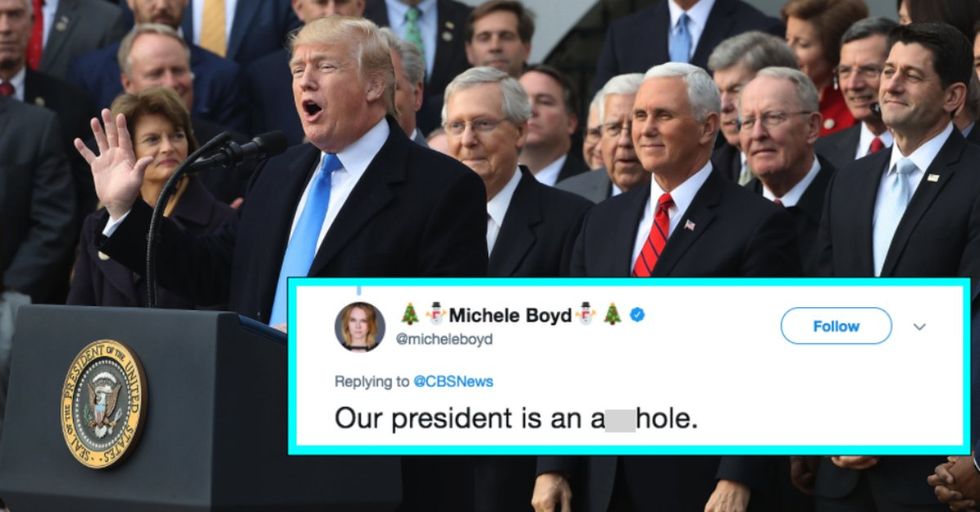 We think it's safe to say that Trump does a lot of dumb things. Regardless of your politics, he makes mistakes like all the time. He constantly lies and contradicts himself and mocks people who aren't like him. Sometimes he tweets about the wrong mass shooting or uses racial slurs. The guy is a walking bundle of narcissism, pathological falsehoods, and unprecedented unawareness about how he comes across to people. It would be amazing to watch Donald Trump move through the world if he didn't wield any real power and couldn't destroy centuries of democracy-building work.

In the first two-thirds of December alone, Trump has made some of his most iconic mistakes, like when he drank water with two hands like a toddler.

It wasn't the first time he's done it, either. The man who is in charge of our entire nation can't take a sip of water without looking like a small, incapable child. How confidence-inducing!

It was only after he politicized a tragedy that he sent his "thoughts and prayers" tweet. Whatta guy.

But we're not remotely done yet!

.@realDonaldTrump claims he 'never met' accusers like PEOPLE's Natasha Stoynoff, but we have the photo… https://t.co/Aoh8VeBfVx
— People (@People)1513107861.0

Trump claimed in a tweet that he'd never met the women who have accused him of sexual harassment, assault, and rape. But there's photographic evidence that indeed he has met these women! Trump tried to lie to the American people (again) and was instantly caught and called out for his falsehoods (again). Obviously, in true Trump fashion, there was no acknowledgment of or (god forbid) apology for his lies.

We're just warming up, people! Remember when Trump gave a speech and everyone thought he was literally dying?

That's right. Trump slurred his speech so badly that many thought he was actually having a stroke or a heart attack. Turns out it was probably just his dentures coming loose, but c'mon, man! The President of the United States doesn't make 100 percent sure his teeth are in place before he speaks on national TV?

Oh yeah, and then there was that moment when Donald Trump admitted to a crime via tweet:

The man is an unstoppable force! Of grave errors! That's right: Way back in the day, two-and-a-half-weeks ago, Trump sent out a tweet that said, "I had to fire General Flynn because he lied to the Vice President and the FBI." If Trump fired Flynn knowing that he lied to the FBI, that would be obstruction of justice. Trump's constant stream of f***ups means that even this insane admission of guilt got swept under the rug. And Trump returned on Wednesday with another ridiculous moment to add to the pile...

Back in June, Congressman Steve Scalise was shot in the hip at a baseball practice in Virginia. He's slowly recovering from his life-threatening and traumatizing injuries, so obviously Trump thought it'd be a good idea to point out that getting shot helped Scalise lose a lot of weight.

"Steve Scalise, he's braver than all of us," Trump said. "Oh boy, I don't know. He had a rougher year than most of us, but it's a hell of a way to lose weight, Steve. You said you lost. Not a good way. We love you, Steve, great job." What. What what what.

Reporter for the Washington Post, Paul Kane, offered a somewhat sort of explanation for why Trump could have possibly thought that was an appropriate joke to make:

It's one thing if Scalise wants to joke about that himself...in private. It's another thing for the President of the United States to say it weirdly at a speech in front of people who have no context for it. Let's just say that Trump is not a comedian.

But it was more than just an awkward joke for many. Trump joked about getting shot while making it easier for people to get guns and commit atrocities like the Vegas shooting, which happened mere months ago.

In short, Trump's joke? Not funny. Not appropriate. Not OK.

Oh yeah, there are also a bunch of other relevant social and economic issues tied to Steve Scalise's incident that we definitely shouldn't be joking about:

It's not by any means a good thing that Steve Scalise got shot, especially because almost losing his life somehow "fortified" his position against gun control. What a world!

But there are only 10 more days in December, which means two things: First, Trump will probably only have time to make between 5 and 5,923,239 mistakes before the month is over. Second, the garbage year that was 2017 is almost over, and 2018 promises to be a year full of resistance, old white men getting what's coming to 'em, and fingers crossed, an impeachment.