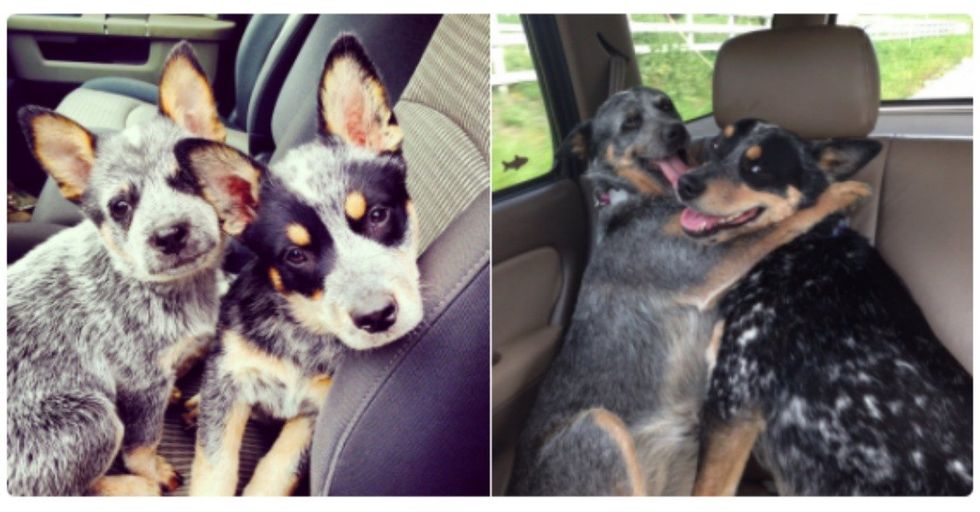 The state of current events has made Twitter a generally unpleasant place to visit, with threads upon threads of angry people weaving a giant tapestry of rage-inducing noise.

But every once in a while, a shimmering thread stands out. It catches the light and glows for a second, and if you're lucky enough, you see it in your timeline, and it makes you smile and believe in something again.

This is one of those threads.

It all started when Twitter user, Ally Campagne Stone, tweeted, "REPLY UR DOGS TRANSFORMATION FROM PUPPER TO DOGGO," and followed it up with this adorable side-by-side of her Brussels Griffon as a one pound puppy and a seven pound grown-up dog.

That tweet sparked a veritable deluge of precious pup photos. They will make your heart explode.

This is a pooper in progress. Started out small, bigger now, soon to be XL. If you ask me, when it comes to dogs, the bigger the better.

This Australian Shepherd started out as a ball of fluff. Now, he's a handsome blue- and brown-eyed grown-up doggo.

They grow up so fast. One day it's, "I peed on the rug because I don't know any better!" and the next day it's, "I know you're going to give me that treat eventually, so let's cut out the middle man, shall we?"

Some things change a lot. And some, like this dog's love for stuffed toys, do not.

According to the poster, this is only a six-month transition from hand-holdable Doberman Pinscher pup to actual horse.

If there's anything that warms my heart more than a pupper's transition to a doggo, it's a sad shelter dog's transformation to a happy-go-lucky smiley pup with a furever home.

From day one, this blue-eyed hunk knew he was a model. Now, you can see him at New York Fashion Week walking the runway for famous designer, Dogatella Versace.

Forgive me, but "Flash" must be a misnomer. There's no way that pup is running fast with those giant sails for ears.

Looks like this little pup grew up to be one giant mushball. If there's one thing you hope when you adopt a mushy puppy, it's that they grow up to be mushy adults.

In a world full of conflict and unrest, this worried-looking pug has the ability to express exactly how we feel with a few little forehead crinkles.

Guaranteed this big baby pupper doesn't know his own size and will try to sit on your lap on the couch. And while you won't be able to feel your legs, you will be able to feel what unconditional love feels like.

PSA: Pit bulls, aside from not being a real dog breed, are precious, loving family dogs who just want to cuddle and be cuddled. Any violence associated with them was manufactured by the monsters who use them for fighting. Also, look at that faaaaace. End PSA.

This dog is finally old enough to ride in the front seat, and he is not taking that responsibility lightly. This is a big deal.

As this little pup grew bigger, his curls got bigger too! He's giving '90s Sarah Jessica Parker a run for her money.

Some pups don't stay as fluffy when they grow up. Good thing this little one did.

Sing it with me (to the tune of the Folgers jingle): The best part of getting pups is watching them grow up! Man, someone should pay me the big bucks for this straight gold I'm spewing.

Dalmatians can develop spots as they get older. It's scientifically proven they get one spot for every cute face they make. (OK, that's not true, but it should be!)

This guy still loves romping in the grass, and now he's got seventy-four extra pounds to do it with!

Baby Beagles are probably the cutest organisms on the planet (I may or may not have a Beagle mix at home), and adult Beagles have the silliest, sweetest faces. Luna is no exception.

Bernese mountain dogs are bred to herd cattle and pull carts, not sit in them and get pushed around! But this guy knows exactly what he's doing. You get a lot of treats for being so adorable.

Time flies when you're having fluff! I mean, fun. This is just one funny dog. I mean, fluffy! But also probably funny.

Newfoundlands are the best giant puppers on the planet (and I'm not just saying that because I grew up with them), but boy do they grow up fast. It's like in horror movies from the '50s where a bunch of radiation spills and makes bugs mutate into giant man-eating monsters, only Newfies just turn into giant man-slobbering monsters. Much better.

With pugs, it's hard to say, "Don't worry. She won't look like that forever," because she kind of will. But that's OK because their smushy faces are the best.

Rocco, huh? That's a tough name. I bet Rocco's compensating for something, and that something is his poofy, ridiculous haircut!

This handsome Husky has that smize down pat. Now, all he needs to do is learn how to turn left, and he'll be the premiere doggy model in all the land.

Winnifred's little face with her little smile and her Dobby ears is too much to handle. I'll be in the corner squealing for the rest of the day if anyone needs me.

This Boxer boy went from a happy smiling pup to a super macho mugging doggo. He's serious now, mom. Don't call him your "little poopy" anymore. It's "Mister Poopy" to you now.

Some things change, like this guy's white-haired snout and dark-tipped ears. But some things stay the same, like his perpetually confused expression.