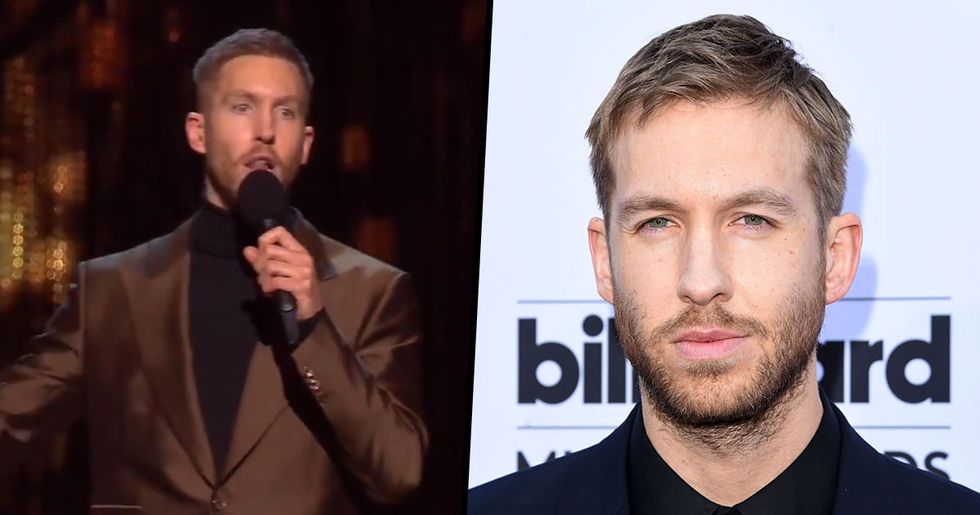 Award season continues with the Brit Awards that took place just a couple of days ago.

Calvin Harris finally won two titles, which he definitely deserves. You know what they say: fifteenth time's a charm.

We all know Harris for his legendary collaborations, such as "We Found Love" which she wrote together with Rihanna. Never forget.

But it was "One Kiss" that won him a Brit this year. To celebrate it, Harris spent more than $100,000 on his and Dua Lipa's performance at the Brit Awards on Wednesday.

But that's not what shocked viewers that night. Just hours after the show, social media was flooded with people sharing two surprising facts they had noticed for the first time about the DJ.

They gushed about the impressive change in his looks over the past decade, and his... voice. That's right.

That night, no single performer truly dominated. However, Beyoncé and Jay-Z made a truly memorable acceptance speech.

They filmed a video in which they replicated a scene from their music video “Apeshit", posing in front of a portrait of “Queen Meghan Markle."

It was meant to be “an emphatic show of support" for Meghan who’s been dealing with so much unwanted attention from the press lately.

Calvin Harris is one of the most-paid DJs in the world.

He made close to fifty million dollars last year, and collaborated with plenty of music industry A-listers, including Katy Perry, Ariana Grande, and Rihanna.

Yet, somehow, he hasn't had much success at the Brit Awards.

Calvin has been nominated 14 times without success! His bad luck turned around this year as he claimed Best British Producer and Best British Single for his collab song with Dua Lipa, "One Kiss."

He was presented by Jack Whitehall, and followed Dua Lipa, Sam Smith, and Rag’n’Bone Man's performance.

In 2018, Dua Lipa won a Brit for Best British Female Artist and Best Breakthrough Artist. "One Kiss" only proved she deserved the titles.

Calvin Harris' career started with a shelf-stacker's job at Marks & Spencer. His first Top 10 hit didn't happen until 2006, when he was 25.

Even though he won a Brit for his production talents, he's actually a songwriter and performer too.

For the Brit Awards performance, The Sun reports, he spent over $100,000 on the dancing animals alone.

He wanted to have a dancing crab and a dragon (similar to those in the "One Kiss" music video) on-stage that night, even though he was only going to spend around 4 minutes up there.

Their performance also had "snow, raining rose petals, a forest, 100 dancers, a giant glitter ball, a mountain and pyrotechnics." It's as if Calvin knew he would win.

Some folk wish for money, fame or world peace I wish for a transformation like Calvin Harris https://t.co/MHz77gnHMM
— Gareth Waugh (@Gareth Waugh)1550698849.0

The first one was people realizing that Calvin Harris is one of those mysteriously impossible and shockingly incredible celebrity transformation cases.

Liam wrote on Twitter: "Here I am convinced Calvin Harris has been taken away by the Illuminati & replaced with who ever the fuck this massively handsome guy is."

He then added, "No chance that’s the same person in both pictures, they’ve not even got the same ears."

Steph Bannister wrote, "Can we all just agree that at some point Calvin Harris has died and been replaced by someone completely different."

Rebecca Chase said, "I wonder if anyone saw the first video of Calvin Harris and didn’t know who it was."

She added, "The man has transformed! He had a certain sparkle in those days though #Brits2019."

"2012 was really the year he began to shape up." It was a hell of a year for his career. "He released hits like Bounce, Drinking From The Bottle, We'll Be Coming Back, Feel So Close, I Need Your Love with Ellie Goulding, and Sweet Nothing." I guess, that's why he decided to step up his hottie game.

And they figured out what made Harris' change seem so "over-night" and what it was that he did wrong all those “before" years, and what was right in the “after."

What did he do wrong?

Paul McGregor says "paying little attention to your hairstyle and skincare is of course a huge mistake […] It’s amazing what a decent haircut and simple grooming routine can do for you in the long run." Then it was his style, or the lack of it, that is: “t-shirts, printed hoodies, baggy jeans and sneakers."

But it wasn't an over-night transformation.

The change consisted "of consistent reinvention, self discovery and probably a lot of help along the way. He started to do a different hairstyle, something [smarter and more elegant]." "He also started to wear smarter clothes, often opting for a shirt and jeans in a slimmer fit rather than baggy t-shirts and jeans which didn’t complement his tall frame at all." And don't forget the results of an intense workout routine and improved posture.

The second shocker on the Brit Awards night was... the fact that Calvin Harris is Scottish.

Harris was at the show to perform "One Kiss" and accept his two awards, LADbible reports. But what made the headlines was the viewers' reaction to his thick Scottish accent.

His acceptance speech was long so people had a good listen to his real accent.

"I want to thank anyone that's ever bought a tune, streamed a tune, come to a show, listened to the song by accident and gone, 'What's this?'"

"I want to thank all of you, people. This means a lot. So thank you very much, indeed," he added.

Even his fans were taken aback by the mystery.

soph wrote on Twitter, "I’m sorry but since when the f*ck was Calvin Harris Scottish??????"

One viewer shared, "What the f**k, Calvin Harris is Scottish? And such a broad accent. Shook."

Another fan was "shook" too: "Genuinely didn't know Calvin Harris was Scottish."

Neve Palmer said, "Am I the only person who had no clue Calvin Harris was Scottish?"

Fay: "I was today years old when I found out that Calvin Harris is Scottish #BritAwards2019"

"I don't think I've heard Calvin Harris speak and it's really freaked me out," someone else said.

But not everyone was happy with the discovery. One viewer shared, "I had no f**king idea Calvin Harris was Scottish and now his accent ruins how attractive he is."

Die-hard Calvin fans, who knew he is a Scot, found people's reactions hilarious.

Matt Paddock: "Calvin Harris started trending in America because they didn’t realise he was Scottish ? ?"

Meanwhile, some fans were reminded of the curious fact.

Danielle Peazer: "It always blows my mind that Calvin Harris is Scottish. Like, I know. But it always surprises me. What a lovely accent he has ?" Pernille Juhl: "Same I always forget that he's Scottish."

But they also noticed that he’s now got a bit of a mid-Atlantic sound going on too.

MrsHTomlinstan wrote, "I’m Scottish and there was an LA twang or something in there too."

So the secret is finally out: Calvin Harris is Scottish.

He was born and raised in Dumfries. Now he lives in LA.

Oh, and here's another secret: Calvin Harris is not his real name.

Scotsman and former Marks & Spencer employee, Adam Wiles is the guy behind that stage name.