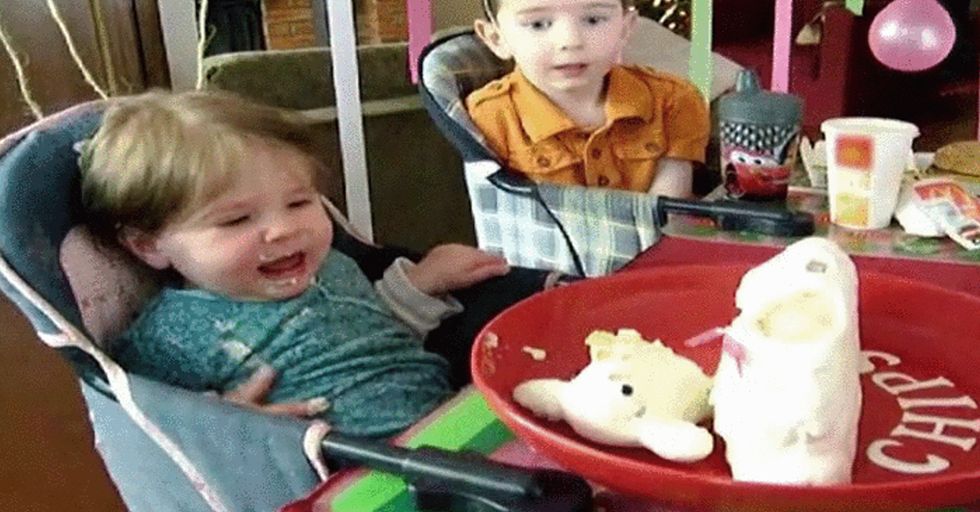 This child just wants to give this dog a hug.

You can see the look on his face as harsh reality sets in and he comes to the realization we all must face: everything we love could one day abandon us. Pro tip: come prepared with treats next time.

Watch as this wedding officiant drops the rings into a pond mid-ceremony.

The entire wedding party freezes when they realize that those rings are sleeping with the fishes. Don't worry, it's not a metaphor for their impending nuptials, right? Everything is fine.

She just wanted to boop its' nose.

Instead she learned all things will eventually crumble and everything and everyone you love will one day turn to dust.

Whelp, bye. He is at the mercy of the almighty ice now and will go where the ice demands.

When someone says you can't have a bite of their food and you think they're joking but then they actually eat it all.

This baby had no idea people could be so cruel.

This man's spirit is broken when his chip flies away.

There's no shame in forming a deep emotional attachment with a Pringle.

Look, we've all dropped a flaming torch, it happens to everyone, it's not a big deal.

The look on his face when he realizes she doesn't want to be seen with him is heartbreaking.

Remember your mom's advice: Never go on a date with someone you wouldn't be willing to be on a Jumbotron with.

The look of realizing you took the wrong girl to prom.

Hope somebody spiked the punch at least.

Watch as this man experiences the panicked realization that he looked like an idiot on live TV.

Most of us only get to do it in real life!

Going to guess this text isn't about all the things his girlfriend is planning on getting him for his birthday.

There is no audio in this video, but pretty sure this man said, "Goodbye, soul. It has been nice having you inside of my body."

This cat experiences the flop of defeat.

Why even go on?

This one is almost too heartbreaking.

He is such a good boy and he tried so, so, so hard!

Watch as this man realizes his car is feral now.

"Mother, I've made a huge mistake."

Whelp, so much for potty training. This kid is going to be wearing diapers for the rest of his life.

This dalmatian has had a terrible realization.

Motherhood is never what you expect no matter what species you are.

This son starts off excited but with every new dance move he realizes more and more people from his high school are seeing this.

The dad, however, finally achieved top honors in Being a Dad.

Well, this is grounds for divorce.

It's been nice knowing you, Carol.

The moment he realizes a tragedy has befallen him.

Did...did anyone else see that?

This poor dog doesn't understand physics and it's not his fault.

There is no good way out of this situation and this man knows it.

Options include: waiting outside your hotel room door until a housekeeper takes pity on you, walking to the lobby in the buff, or, most likely, just dying right there.

This guy just realized not only did he lose his beer, he's going to have to walk around looking like he wet his pants all night.

Guess this Wheel of Fortune contestant is not a film buff.

You never see his face, but you can hear Pat Sajak die inside for him.

Does anyone have any bleach?

Just think how many people's pee he just got on his hands.

Nobody wants an empty cone! That's barely even food!

Never will she ever trust anyone again.

A man dies inside but a sea lion gets the prize of his life.

Maybe we shouldn't have been holding it over such a hungry sea lion.

This baby thinks he is a master stacker.

Only to find his greatest weakness is his own over-confidence.

Oh, to have the confidence of a college aged white man celebrating his own victory before it even happens.

So much that you completely forget you are racing against other people.

When you just know you will never be the best.

This poor kid got all dressed up to be the fifth wheel.

Maybe next Valentine's Day...if he's not completely dead inside by then.