First Date Stories That Show How Chivalry Is Dead | 22 Words 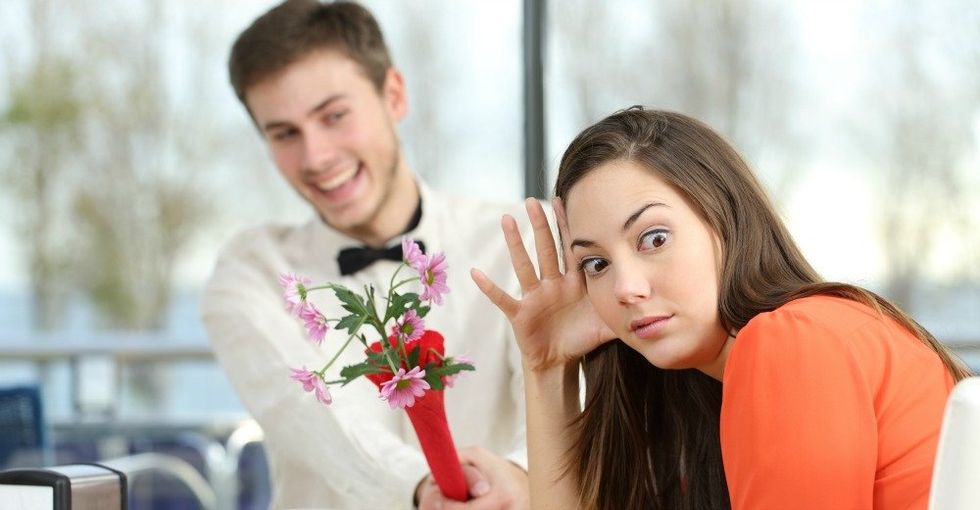 First Date Stories That Show How Chivalry Is Dead

First dates are pretty much always awkward. You have to get all dressed up, think of some trending topics of conversation in order to appear much smarter and more interesting than you actually are, and somehow convince the other person that they'd like to see you a second time. This is not an easy task, and even if you somehow manage to come off as a normal person, often times the person you're on the date with is anything but normal. But, compared to the idea of remaining forever alone, sometimes it's necessary.

From ridiculously creepy comments to rude waiter interactions to HUGE red flags (#28 should have never even gotten in the car with that guy), the following 30 tweets will make you realize just how brutal first dates can be. And, if you're single, they just might make you feel more than okay about your current romantic situation.

my worst non-sexual-assault related date was the guy who talked about himself for 45 minutes straight and didnt ask… https://t.co/tufT1Pofuq
— Talia Lavin (@Talia Lavin)1554135923.0

Here it is: The tweet that started it all. She was also kind enough to throw in her own terrible first date story. And it's a doozy.

So much is wrong with this story. Just when you think it couldn't possibly get any worse, it somehow does.

I totally get this reaction. I always get extremely offended whenever my husband asks my opinion on anything. What do I look like, a hairy-legged hippie with my own thoughts and feelings?!

I can see how an invitation to come over "for dinner" might be confusing. But hold on to your hats, she's not done...

Everyone knows that the majority of a vegetarian's diet consists of potato chips and plain iceberg lettuce. The fact that she expected any more than this is on her, honestly.

Sure, this sounds bad. But just imagine how much worse it could have been had she waited one more second to close the cab door. Or if the window was down.

What a great Mom! Not only does she have an unnecessary hatred for deaf people, but she also clearly still controls every aspect of her adult son's life. So precious!

First of all, how can anyone not like hot dogs? Secondly, this wasn't the end of the story.

...that just keeps getting worse

The perfect end to a perfect date. ...wait, is this not how kissing is supposed to work?

See? Even superstar models like Tess Holliday has the occasional bad date every now and then. Doesn't that make you feel better about your own love life?

Everything about this sounds like all sorts of bad. This ancient creeper should have known better.

Anyone who tells you that their main passion in life is their own body is someone you should not waste your time on. Also, I'd rather not know my current body fat percentage, thank you very much.

So, not only is this guy a blatant racist, he also has a violent temper and has the nerve to waste perfectly good wine. What a winner.

Is it just me, or am I sensing some serious Game of Thrones vibes going on here? Not a good sign. Run far, far away.

Well, that escalated quickly. At least situations like this make you realize who your true friends are. Spoiler alert: They're not the ones who make out with your boyfriend right in front of you.

If someone is rude to a waiter during a date, it pretty much tells you everything you need to know about them. Who gets that angry over a single slice of lemon?!

Thirty minutes into a first date is a bit fast to whip out the cocaine, don't you think? I mean, did he even offer her any?

Who does this? Oh, that's right. Serial killers.

Look, I'm all for men being allowed to freely express their emotions, but crying at your own terrible poetry just makes you a narcissist.

This user later revealed that this was sent to her during the date. While he was at the snack bar. Grabbing a burger for himself without even asking her if she wanted anything.

Um, excuse me, but Garlic Breath sounds like a blast to hang out with. Apparently, this guy just couldn't handle her awesomeness.

So, not only was this woman, in fact, a teenager, but she also had a strange hatred for her deceased grandmother. Rude.

@chick_in_kiev The one where the guy described a recent “religious epiphany” in which he tried to drown his girlfri… https://t.co/KADUBGgQgP
— Soraya Chemaly (@Soraya Chemaly)1554155423.0

Right, because the person you'd trust most to get you home safe is the same one who tried to literally MURDER his ex-girlfriend. How is this man not in jail?!

@chick_in_kiev once on a date that was already going terribly, the restaurant where we were literally caught on fir… https://t.co/5IlzrMmstC
— rachie scare (@rachie scare)1554139541.0

Hey, at least it was a mutual decision. Sometimes, being an adult means seeing what the right path is, taking it, and never looking back.

This Twitter user went on to add that he also peed all over himself and the couch that he had already desecrated. And that her Mom was the one who set them up.

This guy obviously thinks he's better than the "junkies" who buy his drugs. What a gem.

When you're on a first date, you want to present the best version of yourself so you make a great first impression. So dressing as Patrick Bateman, a literal serial killer, is probably not the best idea.

@chick_in_kiev went out with a dj. he brought a kitchen timer to keep himself from rambling. i assured him that it… https://t.co/mfyuVry9HD
— Kathleen Regrets (@Kathleen Regrets)1554142824.0

While part of me appreciates this guy's willingness to curb his blabbering, the execution is all wrong. And weird. So very weird.