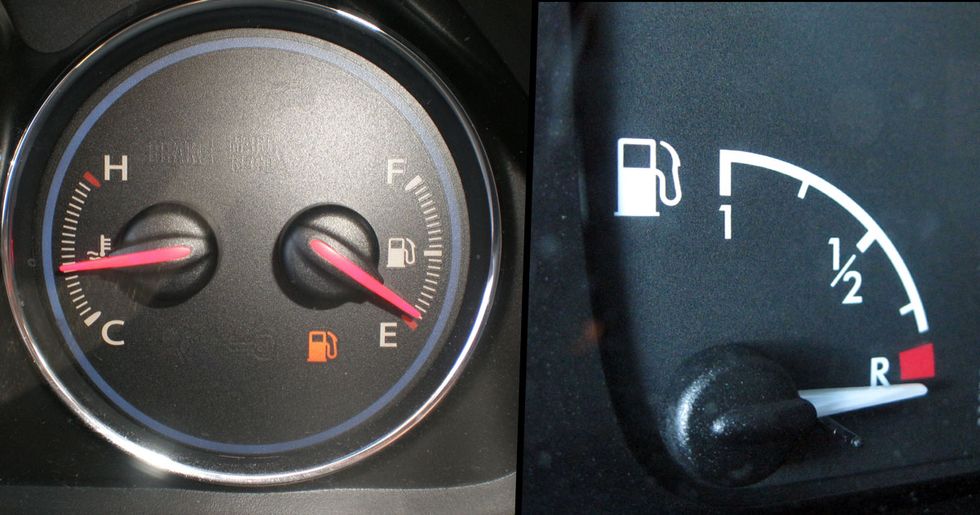 Ever driven into the forecourt of a petrol station, pulled up to the pump and got out of your car only to realise that your fuel cap was actually on the other side of the car, then had to disrupt the queue as you awkwardly circle and reverse into the right lane? Wouldn't it be great if you had something that could tell you which side of the car the fuel cap was on? Well there is, and there always has been.

In the opening weeks of 2019, one man took to Twitter to educate the motorised masses about one particular little thing on the fuel gauge which could save the driver countless embarrassing situations.

How familiar are you with the following story?

It seems that this story is familiar to almost anyone who drives a car, it's one of frustration and stupidity, and it has a very simple solution.

You're driving to your destination.  You've got the radio on, you're in a good mood, enjoying the sensation of the world rolling by under your wheels.

You realise that you're low on petrol. Your gauge starts to signal and you decide to pull in to the nearest petrol station, which is luckily not too far up the road.

The station's fuller than you expected, so you take your place in the queue at the forecourt, wait your turn and eventually pull up to the pumps.

You realise you've pulled up on the wrong side, and that your fuel cap is actually on the other side of the car.

You now have to circle back around to fit on the right side of the queue, but your circling disrupts the other drivers who all start screaming at you.

You're so frustrated and stressed by the situation, that you spill your hot coffee, that's been precariously tilting out of your cupholder, all over your new trousers.

You're upset, slightly shaken, your day's ruined and it's all because of that dam fuel cap. Why me! Why does this always have to happen to me! Stupid! Now I'm late!

Turns out you missed something.

There's actually a solution to your suffering that's recently been pointed out on social media, and the sudden epiphany has taken the car-driving community by storm.

Take another look at that fuel gauge.

Notice the little arrow next to the picture of the pumps - that's the side of the car your fuel cap is on.  Yeah I know, it's been there this whole time.

Here's the tweet from Bethany Black that made relaxed the lives of ignorant car drivers everywhere.

Bethany's tweet received responses from all over twitter, some had driven for most of their lives without realising what that little arrow on the fuel gauge meant.

@BeffernieBlack What! God that’s a great pressure off. I have to hesitate every time I enter a forcourt. So 71! Thanks
— Vivian Horsley (@Vivian Horsley)1547315618.0

This elderly driver had reached the tender age of 71 without finding out about the little arrow.

This tweet highlights a recurring motif in the conversation, that younger people are more aware of the shortcut than their parents.

Here's another parent who found out about the fuel gauge arrow from their child.  Again, a child that's too young to drive.

It's there for an important reason.

There's an important reason for the arrow, according to AAA, there's no agreement between manufacturers dictating which side of the car the fuel cap is on.  So the arrow does an important job.

The side with the fuel cap should be mandated by law, right?

Of course it should, and it would be easy. We have to drive on a certain side of the road and cars are built to account for that - so why not this?

This tweeter wondered if the fuel gauge arrow was unilaterally mandated by law by the European Union a decade ago.  But there's no evidence for that, and many cars manufactured in the EU after 2008 don't use the arrow.

Jim Moylan was a designer who worked for Ford during the 1980s. He conceived of the idea of the fuel gauge arrow in 1986, one rainy day.

One rainy day in 1986, Jim was driving the company car and when he got out to fill the tank, he realised that he was on the wrong side and became soaked.

Jim sent a memo up to management concerning the idea. The bosses loved the cheap idea, and in 1989, the Ford Escort and Mercury Tracer became the first cars to have the little arrow.

Not the only life hack.

Here's one life hack, posted in the comment section, concerning the design of the bathtub plug. Turns out you don't have to dangle it over the tap.

Here's another life hack posted in the comment section. This time concerning toasters, and how to get your toast perfect.

Yeah, they're the minutes!

This tweeter tells the community that the number on the dials of the toaster, actually represent minutes. I know, I had no idea either.

Although it may be good thing that the fuel gauge arrow isn't widely recognised, because it paves the way for some hilarious Youtube videos of people getting the wrong side of the pump. And, don't worry, of course I'm going to show you the top three.

The commentary probably makes this one. And that perhaps these failings are better shared with other sad heroes.

I love this one. It's the moment she realises that the pump is definitely not going to fit.

And first place goes to...

This one wins, hands down. Just watch. It's how long it goes on for, if this doesn't put forward a profound argument for implementing Moylan's arrow, I don't know what does.
65%