But when you think about the enormity of the universe, perhaps there's some potential. | 22 Words 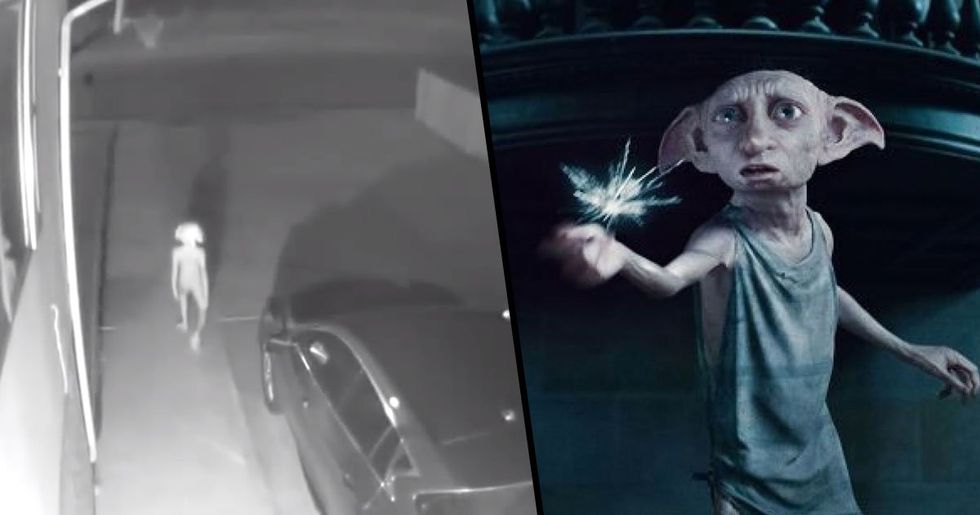 People Are Freaking out About 'Dobby-Like' Creature Caught on Camera

Everyone remembers Dobby, right? The cute (yet somehow also hideous) creature is a favorite from the Harry Potter universe. And, until this week, it looked as if that was where Dobby was going to stay.

But now, there's been a mysterious twist in Dobby's tale. From helping Harry to fight the Dark Lord, it seems like he's taken on a more low-key environment, wandering the streets of suburban USA. Facebook-user, Vivian Gomez, shared a video that appeared to show the house elf walking on her driveway in the middle of the night this week - and, needless to say, the internet has gone mad for this freaky sighting.

When it comes to life within this universe, many of us are hopeful about aliens.

The idea that we aren't totally alone out here is strangely comforting - albeit a little scary, too.

But, for many of us, the likely truth is difficult to accept.

Thinking logically, the idea of little green men invading our planet just seems too close to something out of a science fiction movie to be logically believable.

But when you think about the enormity of the universe, perhaps there's some potential.

If the concept of infinity stands up, then, by the same note, there will probably be other life forms out there - just too far away for us to ever reach them.

Which does mean one thing.

The vast majority of "alien sightings" out there are likely to be a result of a combination of self-delusion and attempts to hoax the general public.

But the most recent sighting deviates somewhat from this norm.

Because there's been a new "alien sighting" in the USA, which doesn't quite look like your regular little green man - in fact, it rather resembles something else.

And the internet has had one overriding reaction.

The video of the mystery creature (shared on Facebook) has got everyone saying "WTF?". Want to judge for yourself? We've got the original recording down below.

People have had a few different reactions.

The primary one seems to be total fear - which makes sense, as the video is incredibly weird, and seems to avoid easy explanation.

The way that the creature walks (and appears to partake in a little celebratory dance) has got a lot of people asking questions, and feeling freaked out.

And some have gone quite a different way.

Many have expressed their desire to fight this frightening little creature. Well, whatever makes you feel better, guys!

Many made this comparison.

The weird little creature in the video bore more than just a passing resemblance to Dobby, a character from the Harry Potter universe.

Dobby is one of the most loved Harry Potter characters.

He's incredibly loyal (sometimes to a fault) and managed to save the lives of Harry, Ron, and Hermione on more than one occasion.

But that wasn't the only similarity that the internet noticed.

Some Twitter-users compared the clip to this viral video of a young boy doing a robotic dance in his driveway.

Others saw this resemblance.

There is certainly a similarity between the creature captured on tape and Roger, the smart-talking alien from sitcom, American Dad!

And that's not the only comparison.

Some internet-users reckon that the creature in the video looks most like the alien from 1988 sci-fi cult classic, Mac and Me.

But the internet has one overriding opinion.

BREAKING: Footage of #dobby minutes before he was sighted on someone's driveway, at around 3am EST this Sunday. https://t.co/JeQKeUo7ke
— Pedro Pimentel (@Pedro Pimentel)1560093133.0

And that is that the "alien" in the video most resembles Dobby. So much so, in fact, that people have been making jokes about how the creature limbered up, ready for his starring performance.

People pointed out one fact.

Dobby has the innate ability to disappear at will - which he uses to his advantage many times in the Harry Potter books and films.

But Potterheads point out one contrary argument.

Dobby actually tragically dies in the seventh installment of Harry Potter. He dies doing what he loves, though, protecting his friends (and the wizarding universe) from evil.

Although others have offered a different explanation.

Many think that it's just a trick of the camera, and the (admittedly weird looking) figure is actually just a small child wearing something on their head. We're not quite convinced, though.

Here's the full original video. Once you watch, you'll probably understand why it's captured the internet's attention so fully - because it is incredibly creepy!