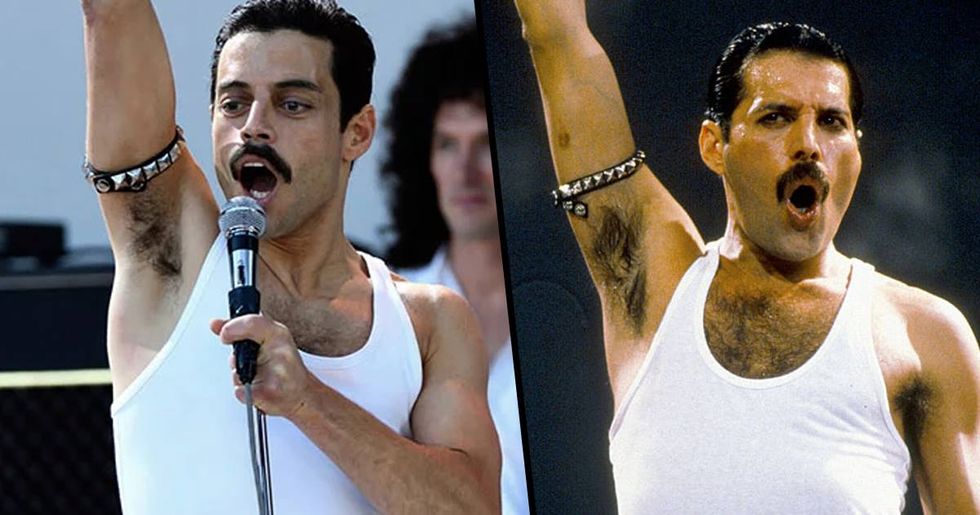 Unless you've been living under a rock for the past month, you've probably watched Rami Malek transform into the role of Freddie Mercury in the Bohemian Rhapsody biopic. The film, that hit US cinemas on the 2nd of November, shows the years leading up to Queen's iconic Live Aid performance, including the band's brief split.

But if you were too busy crying during Queen's reunion in the last scene of the film, you may have missed just how identical Malek's performance was to Freddie Mercury's 1985 Live Aid Performance. In fact, it was so similar some people took to Twitter to express their confusion as to which was the original.

Which, isn't really surprising, considering the 37-year-old actor is said to have watched Freddie's performance over 1,500 times to perfect the reenactment. In an interview with news.co.au, Malek said the Live Aid performance was "something we tried to get move for move, even just gesture for gesture perfectly."

And boy did he do that.

Have a look for yourself.

Looks like those 1,500 views of the original performance really did pay off; Malek's attention to detail is actually faultless. Get this guy an Oscar!

Malek told news news.co.au: "it felt like I had it in my bones and I didn't want to keep going back to it. It felt like sometimes you would lose a little bit of the authenticity if you tried to nail it so perfectly."

No, this isn't the actual crowd of 1985. It's a result of CGI, and strategic crane shots to recreate that iconic moment Queen reunited at Wembley.

And this is the original.

No, this isn't the same picture. This is Freddie Mercury the day Live Aid helped raise £30m for charities in Africa.

People are freaking out.

Twitter exploded with confusion after side-by-side videos of the two performances were uploaded, causing some people to get confused which one is which.

And some people were just impressed.

“Every day we did a song. Day one, Bohemian. Day two, Radio Gaga. Day three, Hammer To Fall and the Day-O. Four we did Crazy Little Thing Called Love. Five, We Will Rock You and We Are The Champions and on the sixth day we rested," he told news.co.au.

Agreed. Malek should get an Oscar for having to wear teeth prosthetics for the entire film alone - that's serious dedication.

An avid fan tweeted: "can y'all please SHUT UP for a moment and give RAMI MALEK the recognition and love he deserves for recreating and bringing the MOST ICONIC PERFORMANCE EVER PERFORMED IN MUSIC HISTORY to life again. I'm telling you, Rami Malek is THAT bitch, and he's getting an Oscar. Thank you."

To think Malek didn't originally get the role.

Freddie Mercury was originally going to be played by Sacha Baron Cohen, but he left the film due to 'creative differences' in 2010 and was replaced by Malek.

But thank God he did.

Because Malek's electric performance was scarily accurate. And the internet seems to think so too.

No wonder his performance was so precise.

Malek reportedly had a recording of the original Live Aid performance on set with him at all times and used it for back-up every now and then. Even after he'd watched it over a thousand times.

Even Queen themselves approve

And the rest of the cast did a pretty good job.

Malek described the Live Aid performance as 'daunting', but his confidence radiates as much as Freddie Mercury's on screen.

Fans are still picking up on the small details

One fan tweeted: "Saw this earlier today, so awesome. First thing I did after the movie was check out how accurate the Pepsi and beer were on the piano... spot on."

Because there are seriously so many.

It's not just accurate; it's emotional.

If you didn't leave the cinemas with tears rushing down your face: you have no heart. Not only was the Live Aid performance realistic - it was emotional.

Which reduced people to floods of tears.

"Rami Malek was PHENOMENAL as Freddie Mercury! Found myself crying a few times, then Live Aid final scene began and both me and mum was in floods of tears throughout (with a couple of other people reaching for tissues)." tweeted one fan.

Even parents were crying.

The biopic ends with real-life images of Freddie, his family, and the members of Queen. And it's only then when you realise how accurate the casting really is.

And when you're not crying - you'll be laughing.

All of the tremendous detail that went into Malek's performance, has allowed Freddie Mercury's flamboyant energy to be preserved.

And it wasn't just the Live Aid performance that was precise.

The costumes, oh the costumes. Everything about this film felt authentic, even when Queen go on their first American tour.

The tears will start rolling the second Freddie comes out as bisexual to his girlfriend Mary: a relationship that beautifully develops throughout the biopic.

And his AIDS diagnosis.

Malek responded to concerns that the film wouldn't deal with Freddie's AIDS diagnosis before the biopic was released, saying it doesn't avoid the singer's battle with the illness.

It's the perfect tribute to Freddie Mercury.

The film even exposes the racism and homophobia Freddie received when Queen was just starting out.

So if you haven't watched it.

Go and watch it. Seriously. There's still time to go and see this absolute masterpiece on the big screen.

And if you do watch it.

You can see for yourself how scarily precise the biopic is - especially the Live Aid performance.

Because it really is chillingly spot on.

And if you don't cry, know that we will be judging you. Even non-Queen fans got emotional during the last scene.

Oh, and they also recreate the I Want To Break Free music video

If seeing Malek is women's clothing isn't enough to buy a cinema ticket: I don't know what would.

And people loved it.

Because not only is it one of the most iconic Queen music videos - it was also banned in the US following its release.

What are you waiting for?

It won't be in cinemas forever, so hurry up and see it on the big screen while you have the chance. And if you already have watched it, you can put the DVD on your Christmas list.