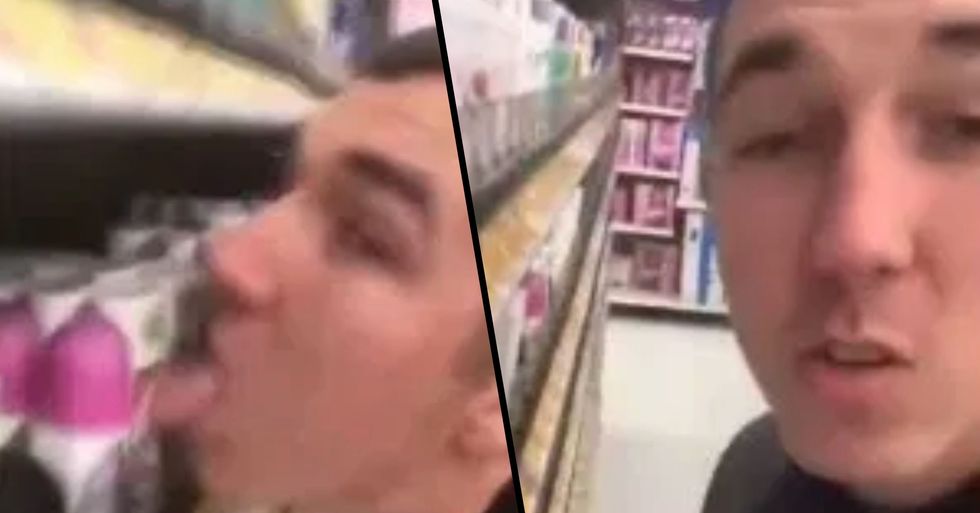 As the death rate rapidly rises amidst COVID-19, more and more people are beginning to panic, self-isolate, and most importantly, take care of their hygiene.

But one man has decided to disrespect this completely and he filmed himself doing the unimaginable...licking toiletries in a supermarket.

Now, it seems some sense of justice has been served. Keep scrolling to find out more...

The spread of coronavirus has been unprecedented.

Originating from the Chinese city of Wuhan, it is now present in many countries all over the world, and has seen countries like Italy, Spain and the U.K. go into lockdown to try to flatten the curve of infection.

Primarily, coronavirus is spread via saliva.

It has been confirmed by Worldometer that 15,433 people have now died globally. A further 358,803 people have been found to carry the virus and be infected.

The man, who is believed to be from Missouri, has remained anonymous, however, the video went viral online over the weekend.

The video has the caption, "I'm a nasty motherf*****" and he is heard saying, "Who's scared of coronavirus" before licking the toiletries on the shelf.

Even though his identity is currently unknown...

The man is now facing calls for arrest after the now-deleted video was shared on Twitter.

"He should be arrested. Family have young children that are poorly. Adults that's are fighting their own fight with health. Pregnant women. Elderly vulnerable people. He should absolutely be arrested," one user wrote.

"The world has too many idiots and it will always be the same situation. It's absolutely nothing we can do about it," another wrote.

Sadly, this isn't the first time someone has done something foolish like this.

This appalling video comes just weeks after a man was arrested in Belgium for licking his fingers and wiping them on a handrail on public transport.

And for more on the pandemic, keep scrolling to learn why Kylie Jenner was slammed for her response to COVID-19...