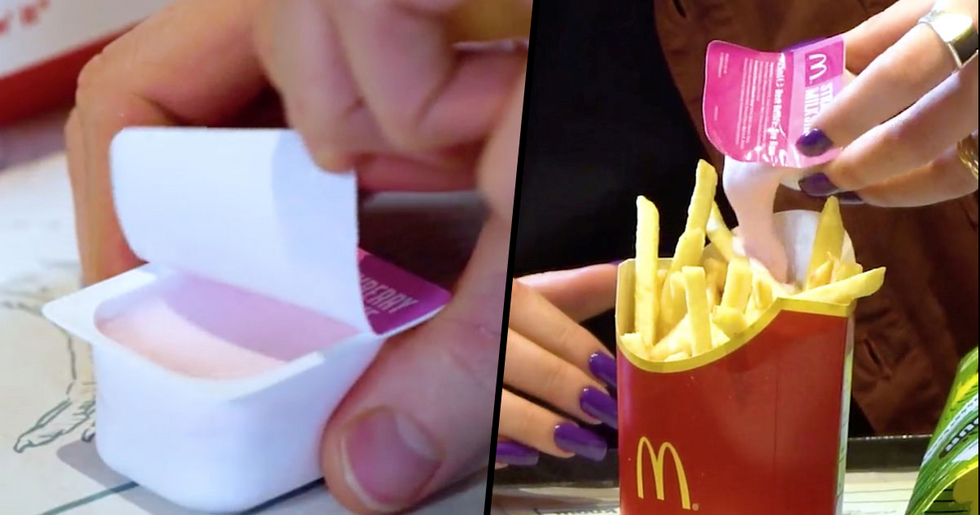 Ahh, April Fools. You either love it or you hate it.

The one day of the year when petty pranks and jovial jinxes are not frowned upon, but actively encouraged.

And what we look forward to more than anything is the multitude of mischievousness that our favorite brands unleash upon their poor, gullible customers.

And food retailers in particular just love to trick us with new additions that we truly want to believe are real. Today, McDonalds has announced that they are now selling "Milkshake Sauce Pots". How long have we been wishing and waiting for these bad boys to be on the menu? How could they do this to us?

And don't even get us started on the April Fool's prank played by McDonald's Australia. It's even more devastating.

Want to know what it is? Check it out at the bottom of the page.

April Fool's Day is upon us once again.

Taking place on April 1st, this fun-filled day gives people the chance to prank their friends, family and even work colleagues.

The first ever April Fool's prank took place in 1627. Unfortunately, we don't have a video of this for obvious reasons but we imagine it was a bit like this.

The prankster in question was Irish. His name was Edmund O'Neely. He invited his friend to go on a carriage ride and asked him to take the reins. Little did his poor unsuspecting pal know that Edmund had unhitched the horses from the carriage and Timothy soared off his seat and went hurtling to the ground.

But it's not members of the public whose pranks we really enjoy.

Big brands love getting in on the action and seeing who can fool their customers the most. Google Nose was just brilliant. And you just know there were people who believed this!

The secret is in making the prank product seem just realistic enough to actually be a possibility.

For example, when Heinz revealed that they had created chocolate mayonnaise! Yes, many were repulsed, but some were actually quite looking forward to trying this unusual combination.

And we will never forget the year that The Metro newspaper in the UK said it had been made with edible paper.

The number of people travelling during rush hour whilst trying to surreptitiously lick their paper will stay imprinted in our minds forever. Again, a prank that is just enough within the realms of possibility to make people wonder, could it really be true?

But some take it too far.

Kit-Kat soap was never going to be believed, now was it? A chocolate bar that can be used for both cleaning purposes and as a tasty snack? Come on, you can do better than that!

Others seem to have made no effort at all.

"The Chocolate Whopper" from Burger King springs to mind. We wonder how long it took their marketing team to come up with that brilliant idea. But believe us it gets worse . . .

Pizza Express' pathetic attempt at a prank a few years back barely raised a smile.

The popular chain told customers that they had "banned cutlery" and they uploaded a hilarious (eye roll) video of four unlucky diners trying to eat their Italian dinner without knives or forks. All they achieved with this "prank" was getting us sprinting for the nearest Pizza Hut. Pronto. And seriously, what was with the annoying voiceover dude?

KFC's offering a few years back was just plain bizarre.

KFC flavored lip balm!!! You can't make it up. Well, obviously they did, but you know what we mean. Why would anyone in their right mind want to kiss someone who tasted like mustard?? We just don't know what to think about this strange and incredibly unbelievable prank.

But fast food giant, McDonald's, have always loved this annual tradition and they are surprisingly good at it.

Each year, customers never fail to fall for one of their fabricated marketing campaigns or bogus new products. McSoup! LMAO! But just wait until you see what McDonald's Australia came up with...

The Micro Mac certainly had us giggling into our french fries.

It seems unbelievable, but in today's ultra health-conscious society, you could possibly see how this new edition would make it on to their menu. We'd have to order at least eight of them though!

Do you remember the year that they launched a fake subscription service?

Called the catchy MmmBox, it was available with three different options: The Ribster, The Minimalist and The Artisan and was created as a way for McDonald's to make fun of the many retailers that had suddenly started to offer subscription services to their customers. We actually quite liked the look of them!!! Especially The Artisan.

Not to mention this epic drive-through prank that McDonald's Australia pulled on their unsuspecting customers.

Hungry customers were faced with an onslaught of weird and wonderful employees serving them their food. There was an opera singer, a wrestler, and even an astronaut. The customers' faces! Priceless.

But McDonald's Japan had to take it one step further.

They revealed a whole new set of menu items for April Fool's Day in 2016. Options included the XXXS fry box that only contained one sad lonely french fry and the Russian Roulette McNuggets. We don't even want to know what those were supposed to be made of!

And this year is no different.

True to form, McDonald's have toyed with their loyal customers by making up a new addition to the menu that they just know their fast food fans will love!

Available in vanilla, strawberry, chocolate, and banana, McDonald's announced that they were releasing these deliciously decadent looking sauces, perfect for those who love dipping their french fries into their milkshake. And yes, we do do that. But just wait until you see what one lady wants to do with hers...

At first, people were really excited.

Yes. This is exactly what we have been waiting for. Now we can enjoy our fries dipped in milkshake without having to actually dip them in our drinks. Result!

But the realization soon hit.

@McDonaldsUK @HydanFlynn I was so buzzing about this and then mid tweet I realised the date n now my heart is shattered
— jess (@jess)1554080660.0

One look at the date on your phone and your dreams are shattered into a million pieces. The truth has hit home and milkshake sauce pots are snatched away from your grasp. We feel your pain.

We really feel for this girl when she realized it was a prank.

Her heart was filled with so much happiness and hope, only to have it all taken away only moments later. We bet she's no longer a fan of April Fool's Day.

Why can't they be real?

But that is the beauty of a great April Fool's prank. People want to believe so much that it is real that they start to doubt themselves, even though it is April Fool's Day and, deep down, they know it is a trick.

Others simply have no words to express their disappointment.

McDonald's! How could you do this to us? Your faithful fast food aficionados. We are so disappointed in you. But seriously, if you think this is bad, wait to see the other cruel trick they had up their sleeve...

Although we're kind of glad that these are fictional after reading this tweet...

WTF is wrong with you? Tuna and milkshake??!!! Not even on our most awful, grease-craving, alcohol-induced comatose days would we want to pour milkshake sauce pots onto tuna pasta. That is just nasty.

April Fools or not, there are some that just can't stomach the thought of milkshake as a dipping sauce for french fries.

We admit that it is a somewhat acquired taste but seriously, don't knock it until you've tried it. The combination of a salty, greasy french fry and the cool, creamy milkshake is actually a match made in heaven.

And no, it's not just for pregnant ladies.

Although this dude may be onto something as one of their other April Fool's Day pranks this year does involve an ingredient that pregnant women often crave... Can you guess what it is?

Here is a clue.

Have you seen this new McDonald's challenge on Facebook? It is hilarious!

Yes, the mystery ingredient is the beloved pickle.

It's a firm favorite as a topping on many of McDonald's burgers, and it's very popular with pregnant women too. It's the salt content that makes pregnant ladies crave them btw... But what have McDonald's done with pickles this April Fools?

They've teased pickle lovers across the nation with the Pickle Burger.

Check it out in slow motion.

You can see the alluring steam coming off the toasted-to-perfection bun. The pickles look plump and juicy. And oh, there are just so many of them! Would it be so hard to make this fantasy a reality?

But once again McDonald's lovers are left devastated.

Why couldn't they think up an April Fool's burger that's disgusting? Not one that we have all been secretly praying for! It's just plain mean.

We wonder what they'll have in store for us next year...

Maybe they will tell us that we can now buy a beer in every McDonald's in the world. But no, that would be too cruel, wouldn't it?