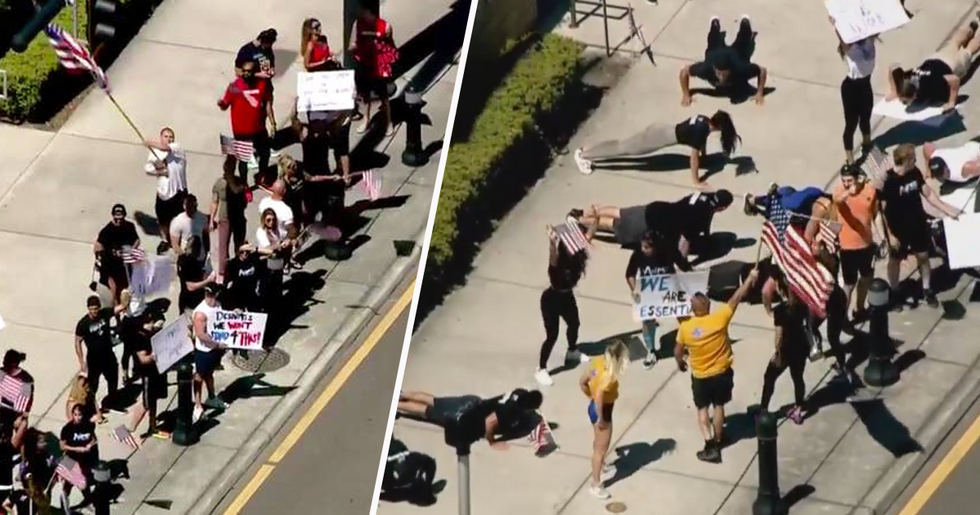 Around thirty people in Florida gathered to protest for the reopening of gyms by exercising outdoors... without social distancing.

Keep scrolling to witness the shocking footage and to see why people have been left furious over these reckless acts...

It seems that residents in Florida have simply had enough of the lockdown...

And they have been taking to the streets to protest for the reopening of gyms... by exercising outside.

Things are simply getting worse and worse by the day...

Scenes at the Clearwater Beach in Florida in March showed a lot of people completely disregarding these global warnings.

1,735 people in the state have now died, showing exactly what happens when people congregate in mass gatherings.

However, alongside those protesting against the reopening of public spaces...

There are those protesting for the reopening... and for their "freedom."

It seems that a lot of people have now simply "had enough" of living in lockdown...

And they believe that things will just go back to normal if everything in their community is reopened, including restaurants, hair salons, and gyms. What a world we are living in.

The protests have been endless...

And the most recent protest is certainly an unusual - and very stupid - one!

WFLA News spotted a protest being held outside of the Clearwater Court House yesterday...

And the protestors were demanding the reopening of gyms in the community.

Of course, there was no social distancing being practiced at all between the thirty protestors.

These people seem to think that by holding mass gatherings during a deadly pandemic, they will get what they want... which most certainly isn't the case.

But then things took a weird turn...

The protestors began to do push-ups and squats. Okay then...

It is extremely contradictory that the protestors started working out...

Because they have just proven that we don't necessarily need gyms to be able to maintain our fitness.

People aren't at all impressed with the protestor's antics...

And many have been calling out these individuals for being selfish and reckless.

Some were furious with WFLA News for broadcasting the protest...

As this is exactly what the protestors want.

@WFLA So many people want to have the right to die and take others down into their selfish quicksand. This is what… https://t.co/b8tfrv0CJ7
— Marc Murphy (@Marc Murphy)1589215980.0

The protesters have been branded as selfish for putting so many other lives at risk.

Watch the footage for yourself here...

GYM PROTEST: A group of protesters has gathered outside the courthouse in Clearwater, calling for gyms to reopen in… https://t.co/6YjAIJns5c
— WFLA NEWS (@WFLA NEWS)1589210446.0

And keep scrolling to read about how President Trump's valet has tested positive for the deadly virus...