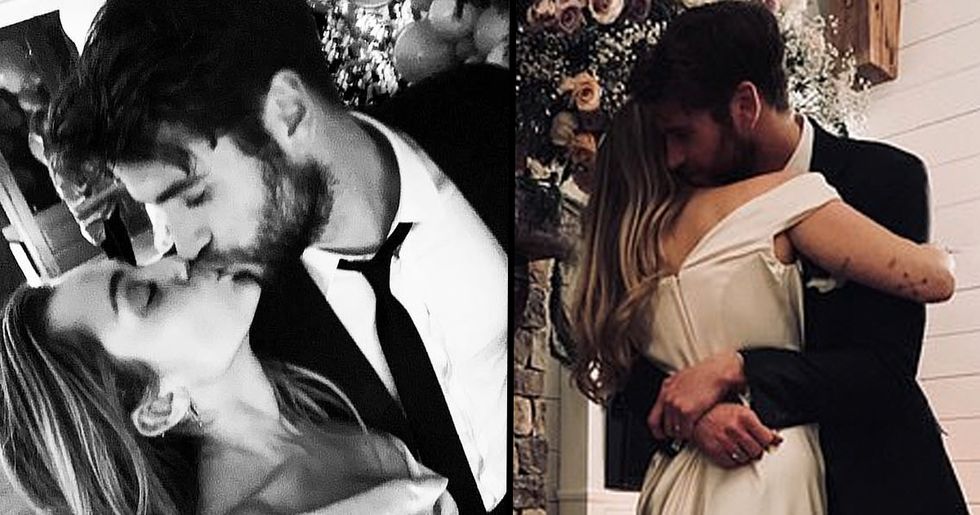 Often in our world, celebrity weddings and marriages are met with scrutiny, admiration and controversy – so you can imagine how the world reacts when the wedding in question was a secret to begin with. It was recently announced by Hollywood sweethearts, Miley Cyrus and Liam Hemsworth, that they decided to finally tie the knot at a secret ceremony at their home in Tennessee. The couple, who first met while filming 2009’s The Last Song, decided it was finally time to take the next step and make that commitment as a couple, and we couldn't be happier for them. The wedding pictures are absolutely beautiful, with many noticing one thing about them that make the day even more special.

The couple met a decade ago.

The couple first met ten years ago, when they played a loved up couple of teens in the film The Last Song.

And they soon fell in love.

The film was based on the Nicholas Sparks book of the same name and has since become a rom-com favourite.

Cyrus knew the moment she met him.

Cyrus was only seventeen when making the film and admits to harbouring feelings for Hemsworth the moment that they met.

Looking back at the film, Hemsworth, now a seasoned 26 year-old actor, admits that he found the kissing scenes difficult.

You want to be professional.

Hemsworth had wanted to be professional with the kissing, but found it hard to pretend to love Cyrus when he knew how deeply he cared for her.

Hemsworth even said, ‘When you're filming those scenes with someone and pretending to love them, you're not human if you don't feel something.

This just shows what a great guy Hemsworth is, and how much he truly loves his partner in crime.

It was a shock to fans of the couple, when it was revealed that they had married in secret.

But they didn’t care.

However, the fans moved on quickly when Cyrus revealed the first photos of her special day.

Cyrus shared the photos of Instagram, captioning this particular image with ‘This is probably our one millionth kiss.’ But that doesn’t mean it’s not a special one.

But it was the next pic that hit us in the feels.

The next photo was a black and white image of Hemsworth and Cyrus holding each other in a loving embrace.

And the caption was perfect!

Cyrus captioned the image as ‘Ten years later’ – alluding to how long the couple have been together.

But not only that!

The image even paid homage to the couple’s famous kiss in The Last Song – showing just how much they have grown and changed over the course of their decade together.

I’m sure we can wish the happy couple congratulations!

However it hasn’t always been smooth sailing.

Although the couple have now been going strong since 2016, their relationship did meet some obstacles along the way.

Cyrus met Hemsworth when she was going through a dark patch in her life – having just broken up with childhood sweetheart, Nick Jonas.

Liam was there for her.

During the filming of their movie, Liam became Miley’s best friend. Cyrus often cites his Australian nationality as the reason for his ability to see pass her celebrity status.

As Cyrus herself stated.

‘He really respects me for who I am because coming from Australia, he really didn't know me as the celebrity I am here. I got to tell him about myself on my own terms and my own way. He had no preconceived notion of who I was supposed to be.'

But they still had issues.

Although this is all very romantic, the couple has faced issues in the past.

Over the years, their relationship has been on and off, sometimes ending in heated and emotional bursts.

And Cyrus conveyed this through her work.

Some have even cited Cyrus’s continuous splits from Hemsworth as being the inspiration for her 2013 album Bangerz.

The lyrics do seem sketchy.

For example, the lyrics of the song ‘FU’, seems to be aimed at someone who has hurt Cyrus and someone who needs to ‘get a clue’.

But all that has blown over.

However the couple have been strong since 2016.

And they’ve only gotten stronger.

And now with their recent marriage, I’m sure this relationship will stand the test of time.

But their relationship will endure.

What started ten years ago on a Hollywood film set has bloomed into a beautiful commitment.

Liam and Miley we applaud you.

They carried on no matter what – showing just how much they need each other.

Who knows what the future will bring.

Now that the couple is married, does this mean that they’ve had their happy ending?

Or will there be more?

Or will their future hold many more happy endings?

This may not be the last time we hear of Cyrus and Hemsworth relationship, showing that this song is not truly the last.