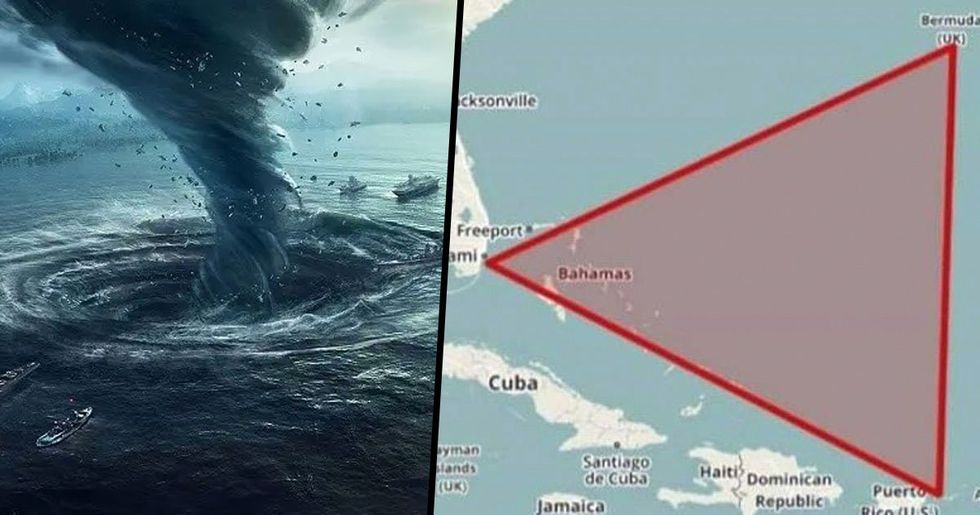 What on Earth would we do without the internet?

The internet gives us so many opportunities: finding jobs, shopping, connecting with loved ones... oh, and also helping to organize worldwide raids against government-protected areas.

Unless you've been living under a rock for the last few weeks, you'll have noticed that the internet has exploded with enthusiastic individuals wanting to group together to storm Area 51 - the most secretive and highly-protected area in the United States.

The Bermuda Triangle is the most recent secretive hotspot that people want to tackle and it seems like there are folk out there who aren't afraid of anything.

Keep scrolling to learn of the Bermuda plan and to find out if they'll actually follow through or not...

It all started with a headline that caught the attention of the entire world:

It's all that everyone's been talking about.

The "genius" idea came from a Facebook page titled, "Storm Area 51, they can't stop all of us." It was basically a plan to meet at Area 51, coordinate their entry, and then break in to "see those aliens."

It is believed that the group began initially as a joke.

But its popularity grew worldwide, with it now holding 1.4 million members who have all ticked the "I am going" box on the Facebook page. The raid is due to take place on the 20th of September, so it is unknown as to whether or not it will actually happen - but people seem pretty keen.

Many have joined in for a joke...

The internet is going wild at the moment for all things Area 51 related, with countless memes and people royally trolling the group such as this user on Facebook, who happens to be the group's creator who admitted to pitching the raid for viral purposes. The Naruto Runner references are endless...

But some have been deadly serious about the whole thing...

Many people online seem super serious about taking part in the raid, and some have even been pricing up flights and accommodation to get them to the Nevada desert.

The American government are not happy about this growing idea...

The Facebook group is gaining more and more followers each day, and it's becoming apparent that the likelihood of this event taking place in September is pretty high. Even if 6 people turn up out of the 1.4 million... the government will go to extreme lengths to protect Area 51.

The US Air Force has been made aware of the group.

In a statement to The Washington Post, a spokeswoman said: "Area 51 is an open training range for the US air force, and we would discourage anyone from trying to come into the area where we train American armed forces. "The US air force always stands ready to protect America and its assets."

Good luck to those attempting to get in...

It seems like the whole idea is going to be one big dud. But obviously, there has to be somewhere for these people - who clearly have nothing else better to do - to raid?

It's all about the Bermuda Triangle. But what exactly is this triangle?

It is nicknamed "The Devil's Triangle."

The Bermuda Triangle is a region in the Western part of the North Atlantic Ocean wherein a number of aircrafts and ships have mysteriously vanished. The majority of reputable sources dismiss the idea of the mystery behind these disappearances.

These mysterious events have made the Triangle a global phenomenon...

Popular culture has linked the Triangle to extraterrestrial or paranormal activity, and there is worldwide speculation about the region. Due to the fact that it has taken over 1,000 lives over the past century and there has been literally no explanation, people have turned the region into a conspiracy.

The mysterious area makes the perfect place for a raid... right?

Well, according to a recent Facebook group, it does! The "Storm The Bermuda Triangle, It Can't Swallow All Of Us" was created recently, inviting people to join together and storm the region of the North Atlantic Ocean. It seems easy, right?

People have very quickly jumped on board...

Over thirty thousand people worldwide have shown their interest in the Facebook group, and it has to be said that many don't seem that serious about taking on the infamous Triangle - it's pretty likely the group was intended as a joke, similarly to the Area 51 raid.

The group has been discussing how to "strategize" their search for the lost pilots and the hidden islands within the triangle - careful not to forget to "clap sea monster cheeks."

People are eager to set off on the life-risking trip...

Like it's that easy to go to the Bermuda Triangle...

Perhaps the Triangle isn't so scary after all...

According to some users on the group, the Bermuda Triangle is just a really awesome place and people simply don't want to leave. I think those who do venture to the region will be in for a nasty shock...

Of course, Keanu Reeves was mentioned...

I'm really questioning the authenticity of this post, but hey! Our beloved Keanu may well, in fact, be storming the Triangle with the rest of them...

Many have taken a pass on the mission for one reason...

It's all getting a little weird...

This is probably the most bizarre viral trend of the year so far and people are fully embracing their inner keyboard-warriors; it's certainly apparent that the majority of the groups' members are just jumping on the bandwagon for the laughs.

Time will tell if the group will tackle the notorious Triangle...

Let's be real for a minute. It's more than likely that the group will never embark on their fateful journey to the Bermuda Triangle. They don't have the funds and they most certainly don't have the guts to face the mysterious vortex that resides in the middle of the North Atlantic Ocean. For now, let's just let people have fun and just try to enjoy the tsunami of Area 51 memes that have been amusing us of late.