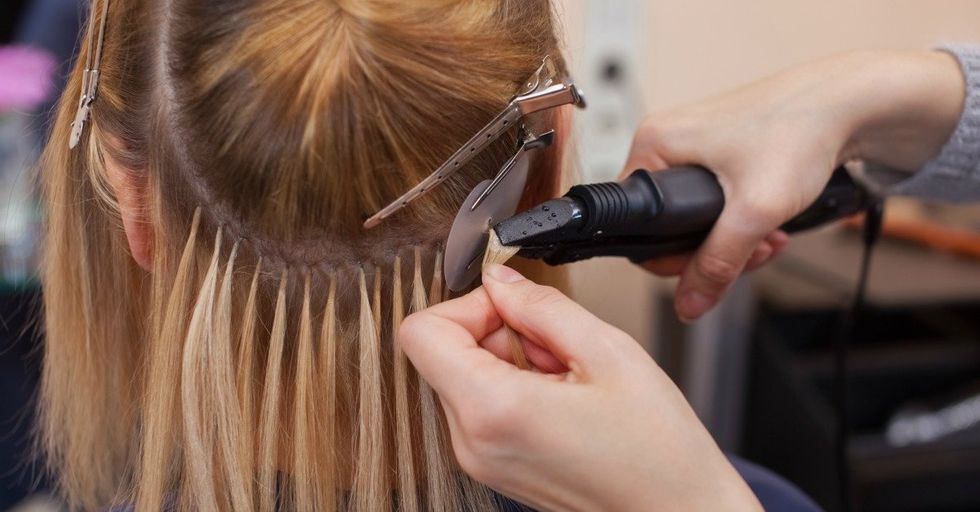 Your Hair Extensions Probably Come From a Fairly Gross Place

Extensions can be wildly expensive, apparently in more ways than you might think. Depending on the kind of fake hair you buy, you could be getting a number of things you don't expect.

If you've ever wondered what the secret to beauty is, it's fake hair. It's long been a celebrity beauty secret, but now, even normal civilians are forking over their hard-earned cash for luscious locks.

The extensions are (supposedly) real hair that you clip in, sew in, or tape in to the roots of your own, natural hair.

Year after year, more and more people shell out thousands of dollars to add length and volume to their tresses.

Some extensions can be clipped in at home, and some must be installed by a professional in a salon.

Ah, the things we do for beauty.

While there are definitely way weirder things done in the name of glamour, the people shelling out for thick, beautiful hair might want to think twice after hearing this new information about extensions.

It turns out there's almost no regulation in the hair extension industry.

And thanks to a recent BBC investigation, an organization called Fair Hair Care is calling for change.

Apparently labels like "100% Human Hair" can often be misleading.

As Fair Hair Care told Metro, "As the industry is not regulated, factory practices are unethical and are not regulated so when demand outstrips supply, factories end up cutting corners and mixing human hair with synthetic hair or animal hair." Wait, so you're telling us we could be unknowingly clipping animal hair into our scalps? What else don't we know?!

As we've learned, even if you shell out for fancy, luxurious, high-end hair, you could end up sharing your locks with a goat.

At least you can say it's all natural?

The problem with mixing animal, synthetic, and human hair is that it makes the extensions almost impossible to care for properly. Plastic hair, animal hair and human hair all react differently to heat styling, so you have no idea if your extensions will hold up or be able to withstand regular wear and tear. Also, it's just weird to know that you might be wearing goat hair on your head.

Unfortunately, even if your extensions are human, it doesn't exactly get better.

Sadly, girls in developing countries as young as two years old have their heads shaved to make extensions. In many cultures, these helpless children are told the hair removal process is actually religious ceremony, though they're rarely even aware of what's happening to them and why. Fair Hair says, "Some beauty supply stores bring Chinese hair and call it Indian hair because it is an easier way to sell it. Whenever they exhaust one name they tag on another name. So, at the moment they have Brazilian hair, they have Peruvian hair, Indonesian hair, they have Malaysian hair, Italian and French too."

Yes, corpse hair. That's hair from a dead person. That you might be paying to have put on your head. "Some extensions could be taken from corpses or could be from girls as young as who have cut off their hair to sell for just a few pounds. This is despite the fact that in the UK, a full head of extensions of the best quality European hair would set you back £2,000," continued Fair Hair.

There's a lot of money to be made from hair, apparently.

And people will do just about anything, including steal hair from babies and corpses, to make it.

Although some people are compensated for their hair, it's usually a very small percentage of what is later made off of it.

Making the whole system just one big rip off for basically everyone but the person selling it.

But there's more you can do than just offer up a big "nope" next time you're in the salon.

Fair Hair Care have a petition you can sign to try and compel the hair extension industry to submit to regulations. You can find out more and join the fight here.