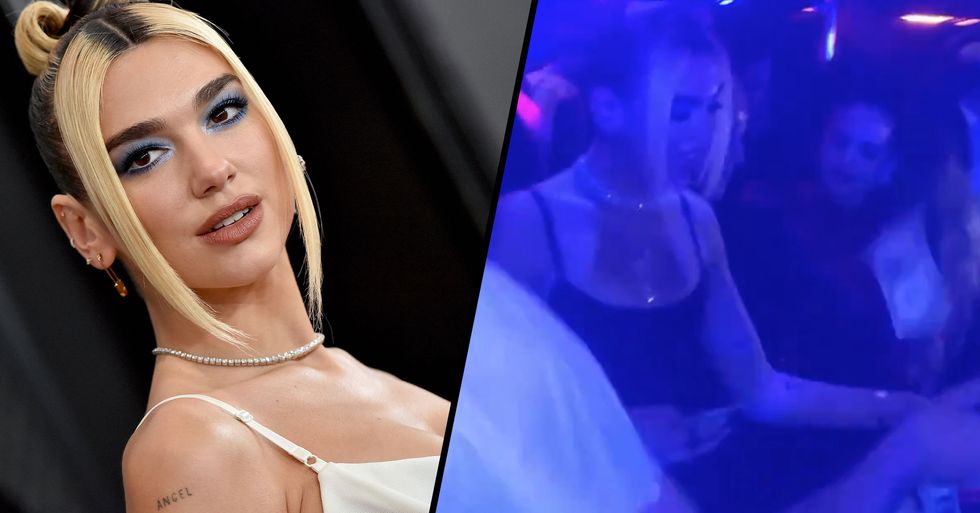 People on Twitter Are Canceling Dua Lipa for Video With Stripper

Cancel culture has now become a crucial part of our society. Ever since hashtags became a tool to raise awareness about different issues, it seems as if we've now manipulated them in order to tear people down. From minute details to actual questionable behavior, celebrities have been thrown under a microscope for our judging pleasure.

The latest victim of cancel culture is none other than new-girl-on-the-block, Dua Lipa. After her appearance at the Grammy's, she decided to celebrate the night's victories at a strip club with her famous friends. But the reason why she's getting canceled may be darker than what we thought...

Keep reading to discover the real reason behind it.

For those of you that don't know, this is Dua Lipa.

An English singer who is currently dominating the pop world.

Born and raised in London, this female artist quickly found her feet in the industry.

After deciding to pursue a career in music at the age of fifteen, she started living alone and working on honing her craft.

And within the next few months, she was picked up by Lana Del Rey's management.

in 2012, after releasing a few demos, she quickly attracted the attention of record labels who were eager to sign a fresh, new talent.

Lipa then went on to release her debut single New Love...

And that was quickly followed by Be The One, which managed to rank at number nine on the official Billboard Music Charts.

However, it was her single Hotter Than Hell which really secured her place in the industry.

In 2016, the singer released the breakthrough song titled Hotter Than Hell which earned her a spot on BBC's prestigious list of music for the year.

It got better for her the following year as she broke British records...

In 2017 she earned the accolade of having three simultaneously charting singles in the U.K. Top 15 starting with "Be the One," then, "Scared to Be Lonely" (with Martin Garrix), and "No Lie" (with Sean Paul).

But her most famous song has to be One Kiss.

Teaming up with Calvin Harris to deliver one of the most iconic summer anthems, One Kiss received global recognition and quickly became the track to bring life to every party.

And in 2019, her efforts in the music industry were rewarded with her first Grammy wins.

Lipa went on to win a Grammy for "Best New Artist" and "Best Dance Recording" for Electricity (along with Mark Ronson and Diplo) at the 61st Grammy Awards Ceremony. She was twenty-three at the time.

Fast forward one year and Dua Lipa made the headlines at the Grammys again, but for completely different reasons.

The 62nd Grammy Awards saw an all-star line up strut their stuff on the red carpet as we all watched in awe. Amongst them was Lipa, wearing a stunning silk two piece.

True to her 90's glam vibe, she had her hair pulled back with a parted fringe hanging loose...

She, along with her boyfriend Anwar Hadid, showed everyone how a true power couple slays the paparazzi. This year was much more relaxing for the star as she didn't have to sit in anticipation.

Instead, all she had to do was a little bit of presenting...

However, the aftermath of the event was what really got people talking.

Lipa and her celebrity besties Lizzo, Lil Nas X and Rosalía decided to celebrate the Good as Hell singer's triple Grammy win the way they wanted to: at a strip club.

An insider told Page Six this:

"Lizzo made it rain for sure. All of the celebs were making it rain and dancing all night with her. She also had some male strippers come in to celebrate her manager Kevin Beisler's birthday."

The thirteen-second clip showed Lipa with a stripper, who has bent over and is shaking her butt against the artist while she tucks loose dollars into her undergarments.

People around her are cheering as she continues to "make it rain."

As this video went viral online, it seems as though Twitter users weren't happy with her behavior. Within a matter of hours, the hashtag #DuaLipaIsOverParty started trending on the social media platform.

"What a good example dua lipa, lizzo, rosalia sexualizing women and then later they announce they're feminists."

And that's all it took for a war on feminist ideologies to break out.

Some people thought that the artists were "bad feminists" for engaging in such inappropriate behavior while others thought people were only criticizing them because they (meaning the users) don't respect sex workers, so attack anyone who uses them.

But surely that goes against the values of feminism?

The adult entertainment industry is one that constantly raises debates surrounding the idea of empowerment. While not all men/women in the industry necessarily want to be there, those that do are happy and proud of their work. It's people who don't respect their line of work as "a real job" who strip back the title of feminism for them.

But "feminism" isn't about burning bras and hating men...

It's about unconditionally supporting women who are doing whatever they want to do in life, whether it be dancing on a pole or single-handedly running a business.

However, another theory about the growth of the hashtag blew everything out of the water.

Y’all are so fucking funny claiming Dua is anti-feminism as you continue to degrade both her and the women WORKING.… https://t.co/OtFdBckeT4
— piss♡⁷ (@piss♡⁷)1580222913.0

According to Twitter and TooFab, the culprit of trending this hashtag is none other than the K-Pop community who have been known online as quite problematic.

"Why would they want to do that?" I hear you ask.

Apparently it's because they like to share gifs and videos of their beloved K-Pop idols in order to promote fancams and new music, so it's constantly trending with other news.

Many took to the platform to condemn Korean Pop fans.

One user wrote this: "Don't mind this hashtag just a bunch of wh*ck kpop stans all over." And another claimed: "These 'over party' hashtags are just excuses to post more kpop vids."

Despite all this backlash, Dua Lipa's fans had her back.

At least make it make sense.

While others agreed with this:

The Grammy's saw some of the best outfits on the red carpet, including Dua Lipa's, but they also saw some of the worst. Keep scrolling to have a little look at the fashion faux pas of the 62nd ceremony.