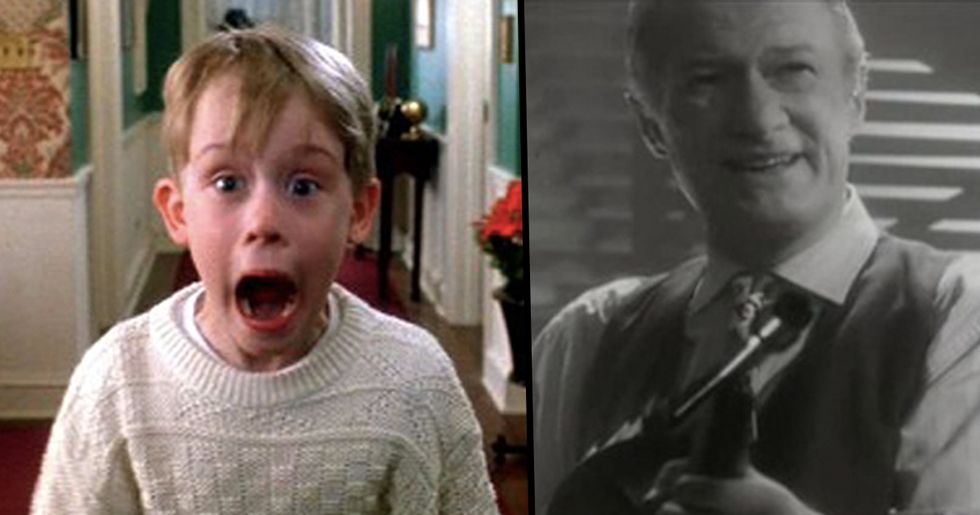 People Are Re-Watching 'Home Alone' And Realizing Something Shocking

Merry Christmas you filthy animals. Sure the holiday is over, but judging by the stretch marks on my stomach, the implications of the holiday aren't going to leave us any time soon. So we're just going to keep writing about it, gosh darn it. And honestly, this one is a doozy. This one is like learning that your parents had to have sex in order for you to be born, or that putting a fork in the wall socket isn't a fun way to spend a Saturday afternoon, or that brain freeze is the leading cause of cancer in men over 50. Bottom line: it hurts.

This is the day that I learned everything from the hit 1990 movie Home Alone is a lie. Not like your average "movie magic" lie. This is like a "your dad telling you he's going out for a pack of cigarettes and only comes back with one so you can't have any" kind of lie. Maybe that's a singular experience. Don't smoke.

We know everyone's favorite Christmas movie of all time is Die Hard.

It's got everything: drama, action, divorce, Bruce Willis in a tank top. What more could you want?

It's got everything: drama, action, home invasion, Macaulay Culkin in a Christmas sweater.

But what it also has is this dope old black and white movie called Angels with Filthy Souls.

What an insane title! Who names a movie like that??

It gave us so many classic lines.

Seriously, this movie is amazing.

It inspires Kevin McAlister in the movie to repeat those great lines.

Nothing like old movies leaving bad impressions on kids...

But you see, dear reader. There's a problem. During our annual Home Alone rewatch this year, this IMDb loving writer thought, "hey, I should finally get around to watching this movie". Well imagine my horror when I found out THE MOVIE ISN'T REAL.

Other people are apparently coming to this realization too!

At least Seth found out before he reached adulthood. I was shook.

And so was Chris Evans!

Ah, finally, we have something in common.

But to be fair to Christ, Captain America is like 100 years old, so what do you expect?

No Chris, no. You didn't understand that reference.

Alright Seth, no need to be rude to my new best friend Chris Evans. Come on.

And apparently, Chris and I weren't the only ones totally shocked by this revelation.

Thousands of Twitterers crawled out of their grandmas' hand-knit sweaters and back online where they belong to point out that they too were surprised to learn that it wasn't a real movie.

WHY DON'T YOU GO NARRATE THIS STORY, THOMAS. If you're not in the know, here's a Vine compilation to cure your sadness. But don't watch it until we're done here. You filthy animal.

People want it to be a real thing.

But I'm still getting over the fact that it's not.

Except I'm cuter than this bear/monkey/puppet. I know.

And then finally... a breakthrough.

@Sethrogen It's not real. But if you wanted to watch a REAL movie that is similar to the fake one watch "Angels wit… https://t.co/rVMFUeaRW8
— Jeniece Roman🇵🇷 (@Jeniece Roman🇵🇷)1545831040.0

And then we have this.

@Sethrogen sure it is. i was watching it over at @iamsteelberg's place the other night https://t.co/XqjYgPJWhE
— regular gem (@regular gem)1545940546.0

A super cool convincing fake VHS mockup of the movie. I want this. Now. Whoever made this -- it's the only thing that can cure my sadness.

And there's a poster!

Not quite of the same era, but I'll take it, too!

Apparently we all should have known better.

Though to be fair, no one remembers anything from Curly Sue. Way worse title than Angels with Filthy Souls.

I'm also on board with this idea.

And honestly, it sounds right up their alley. Perfect for like a Netflix Christmas special, 2019.

Oh, and by the way, Seth is a big fan of these fake-movies-within-movies.

Here he is in Into the Spider-Verse. HOW TOPICAL, SETH. Sorry, I should stop yelling. It's how I convey sarcasm.

Especially because my heart still feels like this guy's glasses.

Any excuse to use this GIF and I will. Only my editor can stop me, and she's on vacation.

Oh and guess what else. There are two fake movies.

@ChrisEvans In Home Alone 2 there was a sequel called Angels With Even Filthier Souls...
— AmplitudeUSA (@AmplitudeUSA)1545792361.0

Two lies I was lead to believe! Will Hollywood ever be honest? Who will answer for this?

Today, we are all in a glass case of emotion.

@Sethrogen @ChrisEvans Nooooooooo! I only watched it the other day and thought I must check that movie out! Not to… https://t.co/6Ah3tmTPpW
— Lindsey Sharp (@Lindsey Sharp)1545791788.0

Please tell me that Anchorman is still a real movie. My heart can't take it.

People haven't given up. But they are losing hope.

I guess we'll just have to wait for the 30th Anniversary Special Addition 4K UHD 3D Blu-Ray with commentary from cast, crew, fans, people that hate the movie, and that dog from the Wizard of Oz for some reason. $299.

Some people are hiding it from their loved ones.

This is grounds for a divorce btw. Actually, I'm pretty sure this is why John McClain and his wife split up in Die Hard. FULL CIRCLE.

Oof. Life spoiler right there. Kids, if you're reading, first of all, why? And second of all, Santa is real, old people just like to joke that he isn't to make him feel bad.

A journalist with the Minesoda Vikings was live-tweeting her watchthrough and hit us with this factoid.

7. They made Angels with Filthy Souls specifically for Home Alone. They literally shot a movie to be played within… https://t.co/U812VP2es8
— Courtney Cronin (@Courtney Cronin)1545759764.0

Shoutout to the real journalists out there doing the hard work. She is what my mom only wishes I could be.

And then Seth just gets on with his day. Like he didn't just hurt all of his 7.79m followers.

Talk about Hollywood Elite right there. Dagger to the heart.

So I'm curious, did you know?

And if so, why did you keep this from me?! Let us know when you found out in the comments, or if this is the first you're hearing about it!