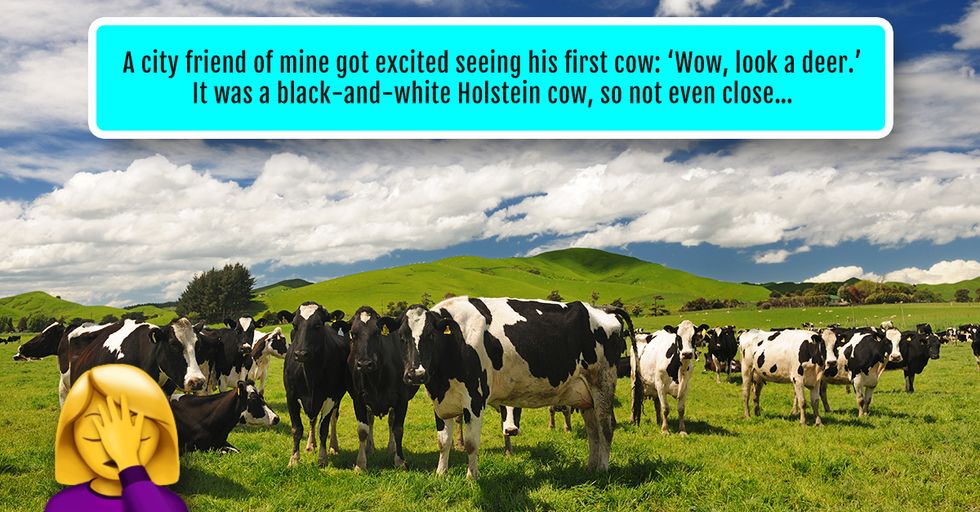 Almost every day, we hear someone say something, at least, remotely stupid. There are those lucky souls who are naturally aloof to the idiocy of others, and some who are acutely aware, yet choose to take an "ignorance is bliss" approach to morons. But then there's the rest of us, who pretty much want to punch people on a daily basis.

But every blue moon, someone will say something so incredibly stupid that it's impossible to overlook or ignore; something so stupid it does not annoy or anger the cynic, nor does it cause the lighthearted to chuckle.

This sort of profound idiocy can only be met with silent awe, as one simultaneously questions their hearing and experiences a sense of gratitude for their own intact mind. This is often followed by yet more silence, as the final realization sets in that there is absolutely zero point in trying to explain anything at all to a person that is capable of saying something so magnificently dumb.

To pay tribute to these rare and unique moments of pure and unadulterated stupidity, people took to Reddit to share their most moronic memories. Here are 20 times that people heard someone say something so superbly stupid that they could only silently stare back in utter disbelief...

Once worked with a girl who asked me when babies first open their eyes. I said straight away after birth. She didn't believe me because every time she saw her niece, her eyes were closed. I had to explain to her that babies sleep a lot. She thought babies were like kittens. -QuoyanHayel Oh dear, bless her heart.. her stupid, stupid heart.

Worked in childcare when I was younger. We had a new student starting my class and her dad was from the UK. On her first day when [her] dad came to pick up, my assistant says 'She'll probably talk like you, right? Aren't accents hereditary? -lostintranslation14

Nope, accents are not hereditary, but stupidity often is.

3. I don't think they INTEND to do that.

Once while driving on a rural road a friend (age 17) asked, "Why do all of the raccoons come to the side of the road to die? -Xystal Here's hoping that they drove straight to the Emergency Room to get this girl a CAT scan. She probably wondered where all the kittens were though...

A city friend of mine got excited seeing his first cow: 'Wow, look a deer.' It was a black-and-white Holstein cow, so not even close... -4rsmit Hmmm, this friend was from the 'city' were they? Seeing as though there's no television or internet in the city, this ignorance makes perfect sense.

5. But has she ever seen a calendar?

I got into an argument with a lady who insisted she was right about there being 10 months in a year. -WiFiForeheadWrinkles I feel like I've lost a good two months this year, too. Where does the time go? Do you have a dark sense of humor? If so, this next stupid human thinks you're a racist...

I had a student who thought dark humor was about black people jokes. -Cutesy_blogger

7. This feels like a Larry David joke waiting to happen.

My former sister in law was genuinely surprised to learn that suicide bombers blow themselves up along with their victims. She asked, "Why do they do that? ...to which we replied, 'Well, if they didn't, they wouldn't be suicide bombers, would they? -Keefer1970 It doesn't make a whole lot of sense to most of us either, that's for sure. Yet, we still manage to grasp the basic concept.

8. But what would they be celebrating? Independence from themselves?

An old co-worker of mine wondered out loud why they didn’t celebrate the Fourth of July in England. -GingerPopp Another Redditor commented: That would be interesting if for some reason they DID celebrate it." Then this Redditor put the cherry on this stupid sundae: Like parents whose child just left for college. 'This is OUR time now! Well, after reading some of these comments, could we really blame them?

I mentioned Wiki-leaks in a conversation and someone said that I can’t believe everything on there because random people can edit the information. I said, I believe you’re referring to Wikipedia and she told me to fuck my self lol. -nelsonic1990

I had a friend who thought hamburgers were made of literal ham. - DonaldNeedsAFatBitch Pretty sure that's a SPAMburger. Totally different animal, literally. While this guy clearly takes things literally, this next person doesn't have the time of day, or the month for that matter...

I met an adult American woman who didn't know there were 365 days in a year and she was extremely offended by the implication that this was common knowledge and that they should have known that. -badgersprite We like how this Redditor felt the need to clarify that this stupid sentence was said by an adult and American woman, just to drive home how inexcusably idiotic her statement truly was.

Outside the big cats exhibits at the zoo, I overheard a fellow in his 20s vehemently insisting to his friends that "lions are the males and tigers are the females.