19 Stories of People Who Really, Really Don't Know How to Budget | 22 Words 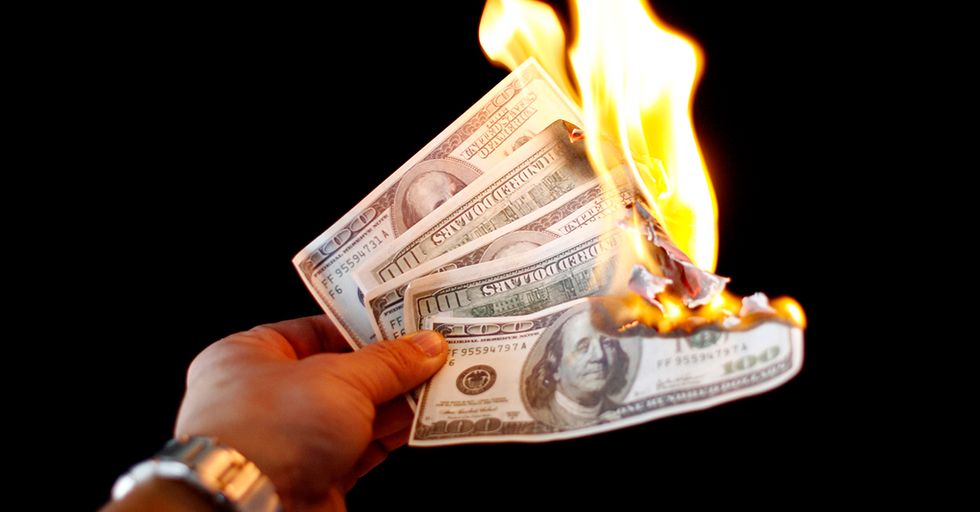 19 Stories of People Who Really, Really Don't Know How to Budget

Everyone likes to splurge on something every once in a while.

Assuming you've paid all your bills and it won't cause any huge problems down the line, there's no harm in spending a little extra money on something you really want.

But some people don't seem to understand the concept of a "tiny splurge."

When they splurge, they really go for it. A recent AskReddit thread asked people about the biggest waste of money they'd ever personally witnessed. Their stories will shock you.

My boyfriend’s dad owns 7 different Apple Watches because he didn’t want to change the bands out. –handsome_colon

So many bad decisions.

I know a guy who purchased a second car. His first car is a Mustang. His second is an Audi. He is a single father. His payment arrangement is 400 per month. He didn't try to talk it down. The car is 10 years old. His Mustang isn't paid off. He works on my team in the same position as I have. My wife and I together can barely afford our 250 per month single car payment. And the best part? He can't drive a stick. His new car is a stick. He hasn't learned to drive a stick. It's been 3 years. He's been doing all of this and struggling for 3 years for a lawn ornament. –Effendoor

The most expensive place on Earth.

I'm a VIP tour guide at Walt Disney World. Each guide costs $600/hour and charging starts when you ask us to meet you, whether you're there or not. A family booked two of us multiple days in a row and wouldn't show up until typically 2-3 hours into being charged. $7k+ overall paid for tour time they didn't use. They didn't care at all. –gatejejf

Someone bought a £20 extended 3-year warranty on a £6 kettle. –Atarisrocks This next one will definitely make you facepalm.

A few years back I used to make cast molded pewter figurines for DnD. I could buy $25 worth of pewter, and make about 50-75 figurines, which I sold for $10-$50 each (depending on the size). Had a guy come to me, buy EVERY figurine I was able to make (I had 72 different molds) for a cost of $900. Said he was going to get deep into DnD. A week later he gave up on the game because he couldn't figure out the battle system... –WeirdWofldGuy

How good could it possibly be?

I work at a car dealership as an apprentice mechanic, now I've seen many examples of people wasting their money, be it car parts, dumb accessories, whatever, the list goes on. But there was this one guy that would spend literally $75 on an air freshener, and bragged about it, constantly. He'd call himself "elite" because he bought these $75 pieces of scented cardboard. I don't know what went through his mind every time he'd buy one of them. –BigJo101

One of our sister companies decommissioned a printing press that was identical to one we were using. It was given to us to store in a warehouse so we could scavenge it for parts as needed. (Parts for older presses can range from $500 for little things to several hundred thousand for larger assemblies, so this was a great gift for us.) Our maintenance supervisor (he’d been with the company for about a year) decided to show management how good he was at cost saving so in an effort to save warehousing costs on “useless parts" he told the warehouse to scrap the whole thing. Even if it cost $15k a year to warehouse it, we’ve needed about 20 times that amount in ordered parts now that could have come off that old machine. –Lordmorgoth666

All in the name of saving money.

One from the late 1990's. A large multinational engineering firm was given orders to eliminate "unnecessary overhead expenses." One of their departments had a large conference coming up. About half the attendees were going to attend by teleconference. In those days, "teleconferencing" was done in dedicated rooms with CRT monitors and cameras. The use of these rooms was classified as an "overhead expense." But business travel was not. So, in the name of Saving Money, all the teleconference arrangements were canceled, and all attendees were flown in to attend in person. –CliftonForce

Some rich dude in the Hamptons buying a pallet of Fiji bottled water. For his hot tub. –wwishie I can hardly even believe this next one happened in real life. It's that dumb.

Friend bought a new fully stocked car he couldn’t afford on his salary. He said it’s OK because he’s getting another job that pays better wages. Only thing is, he hasn’t taken the exam to get his license for the job yet. –SomeA**hole666

I'm glad you're no longer speaking.

Had a friend who was in his late 20s and lived with his parents (100 percent dependent). Dude worked a part-time job and said he was saving money for something big. We all assumed he meant like moving out or a trip out of the country or something. No. This mf bought a $750 pair of SNEAKERS and then put them in a display case. I haven’t spoken to him in about a year. –azrblzz229

The three separate occasions where my dad bought a boat, neglected to use it for years, sold it and bought a different boat like the next year. –PantherTheRogue

On the other hand, free training!

I work for Amazon's Logistical team. They're currently spending thousands of dollars sending people to CDL school so we can move freight between sites. However, they're not giving out bonuses, raises or any kind of incentive. So everyone's just leaving immediately after to better-paying jobs. It's hilariously stupid. –Chocolate_Charizard If you love bacon, this next story will probably break your heart.

That's a lot of bacon.

Not sure the amount of money, but it was a lot of bacon. I once worked for a warehouse primarily focused on food storage services. A client company was storing some pre-cooked bacon for use in some product they were planning to release. They decided not to release said product and ordered all of the bacon we were storing for them to be destroyed. We loaded multiple trucks with close to 150,000 lbs of perfectly edible bacon to get tossed in a landfill. Saddest day of my life while working there. Before anyone asks, there was an auditor from the client there making sure all of the pallets of bacon were loaded onto the trucks and none "fell off." –DarkelfSamurai

This guy has problems.

I have a friend who will book vacations to countries other coworker book trips to so that he can say he’s been there first. –Coob19

I bought a $300 bottle of scotch when I meant to buy the $60 version from the same distillery (the boxes looked nearly identical). When the cashier told me the price, I realized my mistake, but she and everyone behind me in line seemed really impressed that I was buying something so expensive. So now I own an unopened very expensive bottle of single malt because of my social anxiety. –DrTribs

This is just dumb enough to be true.

Around 2001, my wife worked for a national company, and her team was split between east and west coast. No working from home or laptops, Desktops were standard for them. If someone needed to work from home, they had a single laptop they could use. For the whole team. So, if that laptop was in NC, and someone in CA needed to work from home, they had to box it up, ship it (with full insurance, rush shipping, and a few days notice) to the other coast. –RoboNinjaPirate Share this with someone to encourage them not to waste money!