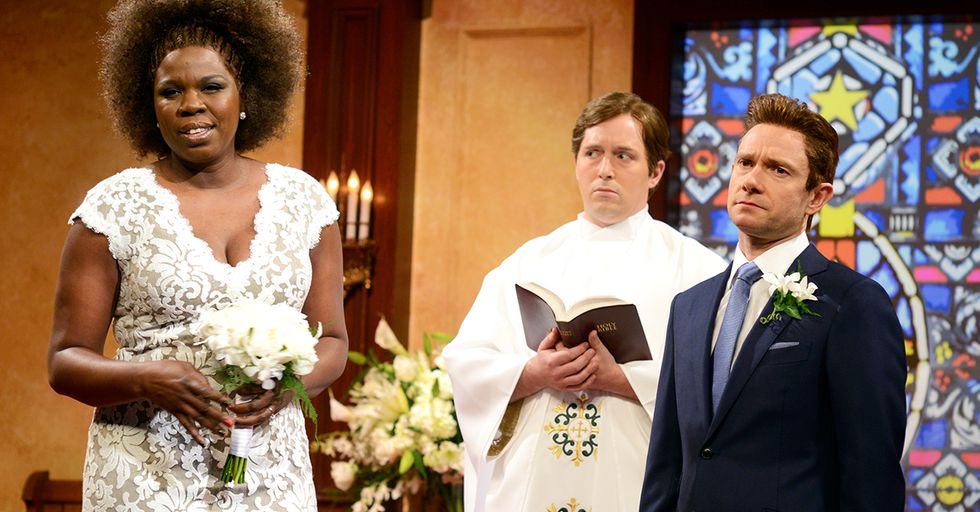 Weddings are wonderful celebrations of love, but that doesn't mean they go off without a hitch.

Sometimes, that is the fault of one or two particularly insane wedding guests.

In this Reddit thread, people are sharing the stories of the craziest wedding guests they've ever encountered, and let me just say, "Oh boy." Today's lesson: Weddings turn normal people insane and don't stop insane people from being insane.

Guests who steal the merch

Steal bottles of champagne and flower arrangements. The couple had bought their own alcohol and was paying a corkage fee to the reception venue. One guest assumed it was free booze and was filling the boot of their car with bottles off all the tables. The bride's mother noticed her walking off with the centrepiece off a table and followed to see what the fuck she was doing. Cheeky twat was quickly ejected. –Percypigged

Guests who do drugs in the parking lot

Overdosed on heroin. The groom stepped out in front of the venue for air. Found his cousin on the ground in the parking lot turning blue. –korinakorina_

My cousin wore white, then tracked us down as we were trying to make our entrance as husband and wife demanded us to pose for a picture then walked with us for the entrance. –Puppiesandcoffee

Guests who steal the limelight

A wedding I was at was next to a goat farm and the goats bleated through the whole ceremony. “Do you BAAAA take BAAAA?" They weren’t really guests, but it was ridiculous. –gth746x

Guests who take over

Maid of Honor brought her 1-year-old baby to the bachelorette party and expected the bride to cut the party short as soon as it was time to put the baby to bed. –OathOfFeanor

Guests who ruin the party with drunk speeches

The DJ stupidly opened up the microphone to anyone who wanted to make a speech. This was after an open bar. One guest made a speech about all the times the bride and groom were on the rocks from his cheating. An old family friend gave a tearful account of how she had wanted to bride to marry her son instead. And another family friend told stories of the groom as a child killing small animals. It was an amazing wedding. –ohcalamity13

My wife and I were given a double magnum of 2000 Mouton Rothschild as a gift. My cousin who was already wasted thought we wouldn't mind if she opened it up and as she is carrying it down to the after party she drops it and it explodes all over my wife's wedding dress. –duckbuttercornpone

Guests who are in love with the bride

The ex-boyfriend forcibly cut in on the bride and groom’s first dance together. After a few awkward and tense moments, some friends dragged him out as he yelled through tears, “I’ll always love you and I’ll be waiting for you when this marriage falls apart!" Plot twist. Several months into the new marriage, she discovered that her new husband was a scam artist going by a different name, had fake IDs with different aliases, criminal record, been married many times, etc. He disappeared that same day, and, yes, she now has been happily married for 15+ years and has three children with her wedding crasher ex-boyfriend. –TheLegendOfZelph The next one is quite violent...

Guests who punch the bride in the face

I saw a bride get punched in the face by her new sister-in-law during the reception. I also saw the bride (a different bride) punch her new mother-in-law in the face right after the wedding ceremony. –dickcissels

Wedding reception in the penthouse boardroom of a bank. Lobby of said bank had a koi pond. Someone in the wedding party got wasted, took off his shoes and socks, and went fishing for koi with his bare hands. I wish I could say it was someone else. –NeverEnufWTF

Guests who punch the best man in the crotch

Ring-bearer marched right up to the best man and started punching him in the crotch repeatedly during the ceremony. –NinjatheClick

Guests who discovery adultery at the reception

At the wedding bridesmaid 1 found out that bridesmaid 2 had slept with her boyfriend (who was also at the wedding). We had to remove bridesmaid 1 from the venue as there was a high chance murder was going to be committed. The same wedding the father of the bride was so drunk he threw up in the middle of the dance floor. –EmotionalPiglet

Happened to me when I was like 9, it was my cousins wedding and me and my other cousins were playing in the lobby of the banquet hall (like normal 9-year-olds) when all of a sudden a dude who works at the hall yells at us, he was one of the security dudes, my older cousin tells him to eat a butt, so he f**king whips out a gun that was underneath his jacket and point it at us. I ran and told my dad who then told my cousin, who was the one getting married and the police were called. The dude was arrested for having a gun without a license and something else I can't remember. –Adrian5590 The next one is pure hilarity...

Guests who wander off into the desert

Actually me and my brother. We were in the desert at our cousin's wedding, and after hitting up the open bar for a few rounds we decided to walk into to the open desert. The two of us ended up walking a few miles into the middle of nowhere and saying "yep were lost". The sound from the wedding traveled pretty far so we were able to hear it from the top of a hill and find our way back. We totally fucked up our clothes though. Also, only our parents realised we were gone. 7/10 wedding, would have open bar again. –NorKal

We left wedding favors along the table for our guests, and one family arrived early so just picked apart all the boxes to eat their favorite sweets. In hindsight, we definitely should have held the favors back to give at the end, but they looked pretty ? –keepthebear

Brides who just want to get it over with

Be never been able to decide whether this was a scumbag move or a pro move. Saw this go down when I used to do catering. The groom was way more into the whole wedding industrial complex than the bride and planned the entire thing. He decorated the venue by himself the day of. During the ceremony, the bride cut off the officiant during the vows saying, “yeah yeah yeah just marry us already." It didn’t read like, “I’m so excited to marry this person I can’t wait for you to finish this speech!" More like, “Can we get this over with already so I can get drunk?" –pdxcranberry

Guests who do the turtle

There's a scene in Animal House where John Belushi screams, "TURTLE!!" on a dance floor and lays on the floor like a turtle stuck on its back. I once saw an entire group of people at a wedding reception do this. –Offthepoint

Guests who eat too many cupcakes

Not outrageous and not another guest but I was 10 and I ate too many cupcakes and I went into the bathroom and threw up –criuggn Share this with your next wedding date to show them what not to do.