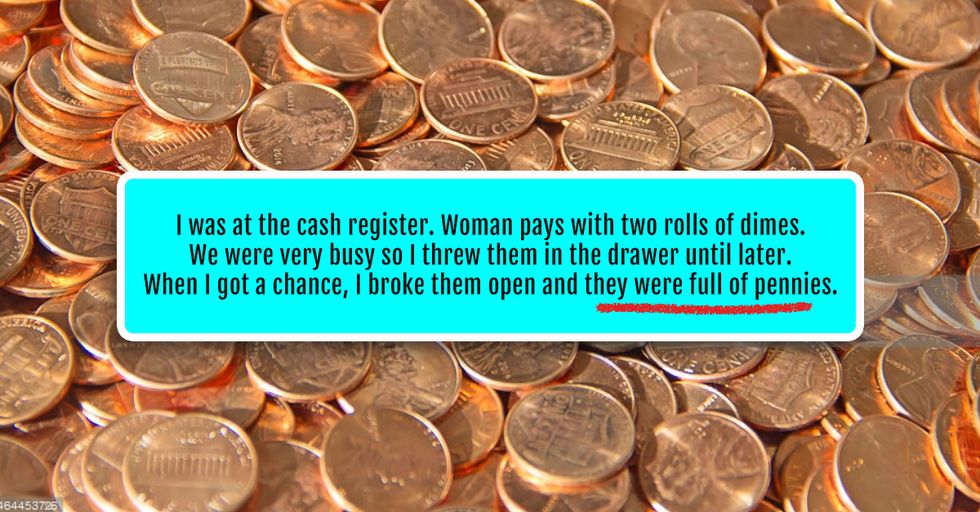 We all remember the first time we fell for a scam.

For some of us, it was agreeing to join the "PEN15 Club" back in elementary school.

Hopefully, you only made that mistake once.

Luckily, if you've ever fallen for a scam, you're certainly not alone.

In a recent AskReddit thread, people came forward to share the stories of dumb scams that they've fallen for. Some of them are seriously incredible.

In high school, I worked at a Subway. I was at the cash register. Woman pays with two rolls of dimes. We were very busy so I threw them in the drawer until later. When I got a chance to do so I broke them open and they were full of pennies. –yessacabbagez

There are some expensive teas out there but $50 seems steep. Ha, steep. Get it?

A friend came to Shanghai, China for a quick vacation. She was approached by a "student who wanted to practice their English" and went with them to a tea shop where that forced her to pay exorbitantly for the tea — something like $50 for the pot. She happily paid for the tea at the price they asked. She even bought some loose leaf tea from them before she left. When she saw me, she explained what a great experience it was. – ValueBasedPugs

This one is kind of brilliant. Like, definitely evil, but brilliant.

In a hotel, the hotel phone rings at 6:30 am. I pick up. The lady says the payment system crashed and she needs my payment info again. In my sleepy logic-free mind, I give her my credit card. Go downstairs to check out. They have no idea what I'm talking about the system crashing. What happened was a scammer called up the hotel front desk and asked for a random room number, which happened to be mine and the desk transferred them to me. So, the hotel paid for my stay. I was able to cancel the card. They had only changed a hundred or so bucks to it and I got it back from the bank. I'm usually very skeptical about things, but I fell for this one hard. – GodFeedethTheRavens

When I first moved to this city I was meeting some friends for brunch, and I parked on this side street. Started walking toward the restaurant and this guy yelled after me "Ayy!! It's $5 to park here!" I was like "Oh, I'm sorry I didn't know!" and then gave him the $5. At brunch, I told my friends about it because I was like jeepers, your parking enforcement is really intense here and very intimidating! That is when they told me that I was just scammed out of $5. Parking on those streets is free. I just gave $5 to a guy in a vest because he told me it was $5 and had a vest. – Outrageous_Claims

I pulled into a Target parking lot with my window down. I had literally JUST parked and this lady comes up to me to ask me to buy her a cab (really just give her money "for a cab") because her boyfriend left her at Target. She didn't have any bags, and she said she didn't feel like walking. Whatever, an Uber would be cheap and I didn't know if she was lying, so I ordered her an Uber. So I go in and get what I needed, and the lady hadn't gotten in the Uber yet. She said she would just rather have the cash. So I lied and said I don't carry cash, and she wouldn't even take the Uber. I had to cancel it after like 5 minutes so I got charged the fee. – dolphinankletattoo

I was in Thailand and received an email receipt from Apple with a few hundred dollars worth of iTunes stuff on it. I freaked out and thought the WiFi at the guesthouse was shady and someone had hacked my iTunes. So I clicked the little customer service link and typed in my Apple ID and password to log in. And then it hit me. I quickly realized that with access to my Apple ID, they had access to my credit card information, home address, etc. I deleted all of my info and changed my password, then called the credit card company. Thankfully nothing bad happened, but I sure learned my lesson.– TrubboTrubboTrubbo

I was at a music festival and bought a sh*tty local rappers mixtape for $40 instead of $5. He finessed the hell out of me and I didn’t even realize it until I was back at my tent. Still pissed about it to this day — but at least I have his CD somewhere. Lebo Soprano, if you’re out there, your 42-track mixtape full of 30-second songs is garbage. – darkwingduckman

This is why we need to teach math in school, kids.

I'm pretty sure that 15 years ago, a guy pulled that trick on me where they ask you for change and then quickly confuse you into thinking they gave you more money than they did. I'm ashamed of it to this day, and I'm not even sure that it happened. – scottevil110 This next one is a scam we've all fallen for at some point...

Ugh, I liked that pen!

"Hey, can I borrow a pen?" Never saw that pen again. – gustafSN

Sometimes YOU are the scammer.

I did one of those MLM door-to-door sales jobs for almost six months back in the early 2000s. I made a little money but realized it was BS but took me a while to find a real job to replace it. – bad_movie_fan

Not me, but my dad. He was in a car boot sale park. Calls me and asks me if he should buy this laptop and iPhone for £250 and if it seems like a good deal. I thought it was too good to be true, but why not if it can be done, plus they wouldn't F with my dad as he's sort of solid and tall. I should have known better. He calls me 2 hours later when he arrived home to tell me he was scammed and tricked into buying a backpack full of potatoes. What happened is that they showed him the stuff, in working order and proceeded by putting them into a backpack and then in the back of their car on the seat to receive and count the money. Then they took the backpack and gave it to him. They switched the bag right in front of his eyes but did not notice it until he got back to his car and checked them. When he went back, they were already gone. I was pissed off because out of frustration he threw the backpack away, including the potatoes. – thestrikr

Wait, gas money for what car?

This was a couple of years ago now. I lived near a gas station so I was walking home one day and a block or so away from the gas station an older lady comes up to me and asks for 10 bucks because she filled her gas tank up but forgot her wallet at home. (In Canada they allow to pump before paying) I didn't have any money on me at the time so I rushed home to get money for her. On the way back I noticed she didn't even have a car...At this point, someone nearby stopped me and told me they had seen me talking to her and that she does this all the time. My cynicism towards humanity grew a few levels that day. I just wanted to help out! – theycallmeMRpotato

We can tell this isn't going to go well from the first sentence.

15 years ago I tried to buy weed in Cuba. I was like 18. On closer inspection, it was definitely not weed. I even smoked it because I wouldn't admit I was scammed. It was like smoking dirt. – blueblue43 This next one is so pure...

Aww, this is kinda sweet but sad, actually.

When I was in middle school I went on the internet in the library and got one of those pop up "YOU'RE The 1231233 visitor enter your email to claim your reward!!" I told everyone that I was going to get money. I was bringing in Best Buy and Circuit City flyers to study hall and would spend the whole time picking out the video games I would buy. People would ask me in class, "Hey did you get your money yet?" I would always tell them I was getting it in a couple weeks. – Barackbenladen

Ummmm, not sure this is hypnosis, dude.

Years ago I worked as a cashier and one day a customer paid normally for the product and while I was counting the money he said, "Let me hold that" (pointing his head to the money) and I gave him a $100 bill. "Thanks" "You too, have a nice day" Only noticed minutes later. I still don't know how he pulled out a hypnosis thing on me. – IGPerrish

The virus security software gets us every time.

Computer popped up with a virus warning and a very legit-looking name and number to call. I was a bit behind-the-times technologically speaking, so I just assumed it was legit since I was on Google Chrome at the time. I called the number and paid $50 for updated virus security software and all was well. I only realized I'd gotten f**ked when the same thing happened again a few weeks later. I'm lucky they only got me for that first $50 instead of wiping out my entire account after that. – helloiamCLAY

This is relatively creative for a scammer, actually.

Back in the '90s, I saw a magazine ad that said, "Master Key: Opens Any Lock!" I sent my $20 and waited. Weeks later, I got a tiny Allen wrench taped to a piece of paper with lock-picking instructions. – ovalseven

As a teenager, I was working alone in a small store. Some guy came in and brought about $9 worth of stuff to the counter. He went into his wallet and then said something like, "Sh*t, I'm sorry man. I have to put this stuff back. I only have a 100 dollar bill." I looked at the cash in the drawer and said, "It's fine. We can break that for you." Later that day, the owner of the store took me aside and showed me how I had taken a counterfeit c-note and given the guy back 91 dollars in actual real money. As I looked at it closer, I realized it wasn't even a good counterfeit. The printing was blurry and the bill itself wasn't even physically the right size. The store owner was very cool about it and didn't chew me out or anything, but man I felt stupid. – ladybug_F**kfest Share this with your friends on Facebook who you think are likely to fall for a scam!